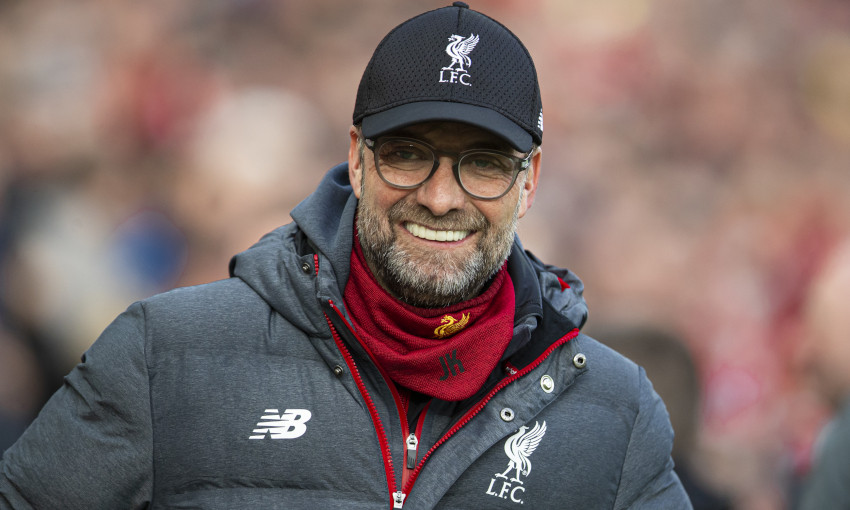 The regular release of footage from Liverpool’s online team training sessions has made for viral social media content in recent weeks – and Jürgen Klopp has explained why they’re as fun to be a part of as they appear.

The Reds have utilised modern-day technology as they train remotely, with a variety of workouts hosted via video link, bringing the squad and staff together.

Snippets of the calls have been posted on the club’s official social media channels, offering a unique insight into the group’s camaraderie, while birthday singalongs for Harvey Elliott and Sadio Mane have also been uploaded.

The sessions enable the squad to work together as a group as they maintain fitness away from Melwood; however, speaking to Liverpoolfc.com in his latest exclusive interview, Klopp outlined why the social aspect of the link-up is something that should not be underestimated.

Read on for the manager’s thoughts…

In the last couple of weeks we have been showing a glimpse into the team’s online sessions. Pretty much every Liverpool fan is talking about it at the moment. What have you made of them?

It’s just great. Look, it’s so different. Everything is different in the moment and we do all different stuff. When we have these training sessions, I could have never imagined I would enjoy it that much but it’s just the moment when I see the boys again and that changes everything – for a minute, for an hour, for two hours, however long the sessions are. The boys are all in good spirits; you feel immediately why you miss them so much, because it’s just an exceptional group. You want to be together with them, you want to have them around, you want to be closer to them than you can be. These are the closest moments, apart from exchanging messages with them and asking, ‘How are you?’ and stuff like this. So I enjoy these sessions really a lot. It’s getting worse, the longer it takes. I accept the situation 100 per cent like it is but the longer you don’t see somebody you like, the more it hurts. That’s the situation we are in at the moment.

It must be nice in that regard to see the boys and seeing the togetherness. But it’s a little bit chaotic, everybody talking at the same time, it’s very funny isn’t it?

Yeah, some people may say it’s like a normal meeting or normal session we have! But it’s not like this. I like that as well. When we start at 10, the chat is open from 9.30 on and pretty much everybody is already in. Especially in the first few they were all pretty early in the chat, so it was really chaotic. Meanwhile, they join it later now everybody knows how it works technically and stuff like that. So they come later, but in time, which is important – because we fine that as well! Too late in a Zoom session means you have to pay! That’s the best thing of having this situation in 2020 – we have this technical opportunity. Imagine if we would have had that in the ‘80s or something like that, it would have been really crazy. Not because of football, because of all the social contact and interaction we can have and use in the moment. That makes a big difference.

It’s a chance to sing ‘Happy Birthday’ to the birthday boys, too…

Yeah! That’s really chaotic because we sing together all the time but when we are outside, obviously that works better. Now it sounds really awful! But it’s the idea behind it which counts. Everybody who had a birthday so far and when we had a session on that day as well appreciated it a lot. The boys like it. I don’t know exactly the number of languages we have but we use them all. On the pitch if we do it there before training, I see them all together; on the app now, I have to switch pages to find them all, so maybe I forgot one or two languages from time to time. The highlight is the second Dutch two, how we say, which ends with, ‘Hurrah, hurrah, hij leve lang, hij leve lang’. We will never forget that.

There have been some interesting haircuts popping up…

Yeah! Both Lallana boys did it, Pep Lijnders did it. Some of them need it, like Ali, it would be cool but he lets it grow – I don’t know what the plan is behind that! Millie looks still the same, maybe his missus is so skilled in that and she can do it. For all of us, the hair just grows as long as it grows.