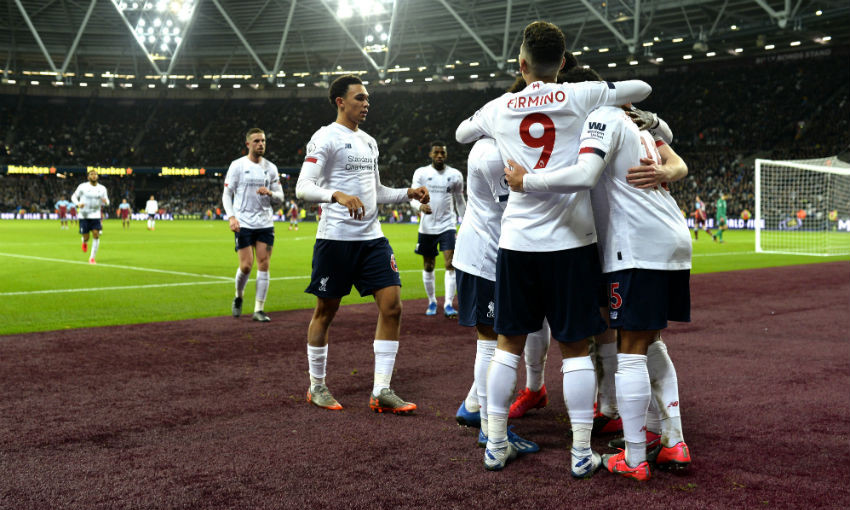 Liverpool moved 19 points clear at the top of the Premier League thanks to a 2-0 victory at West Ham United on Wednesday evening.

Goals from Mohamed Salah and Alex Oxlade-Chamberlain helped the Reds extend their lead at the summit and make the most of their game in hand on second-placed Manchester City.

Salah broke the deadlock at London Stadium from the penalty spot in the 35th minute after Divock Origi was fouled by Issa Diop inside the 18-yard box.

The Egyptian then turned provider when he delivered a brilliant assist for Oxlade-Chamberlain's finish in minute 52.

Jürgen Klopp made a solitary change to the line-up that beat Wolverhampton Wanderers in the last league fixture, with Origi replacing the injured Sadio Mane.

The home side, meanwhile, handed a first-team debut to 19-year-old defender Jeremy Ngakia.

Liverpool appeared to be in control of the contest from the first whistle. However, it would take until the 24th minute for them to create the first goalscoring opportunity.

Andy Robertson's lofted finish over goalkeeper Lukasz Fabianski was cleared by Diop in the nick of time before it trickled over the goalline.

That situation came about as the left-back's forward run into the penalty area was found by a classy first-time through ball from Salah.

Five minutes later, Robertson attempted to return the favour, but Salah and no player in white could get on the end of his drilled cross from the left.

Liverpool's pressure finally told, though. As the ball fell to Origi inside the box, he was brought down by Diop before being able to get a shot away, with referee Jon Moss duly pointing to the spot.

Salah stepped up to take responsibility from 12 yards out, firing into the bottom right corner and sending Fabianski the opposite way.

The visitors continued with their dominance following the half-time interval.

Roberto Firmino was denied by a fine low save from Fabianski until Oxlade-Chamberlain eventually made it 2-0.

Liverpool launched a breakaway from a West Ham corner as Salah's exquisite outside-of-the-boot pass put Oxlade-Chamberlain through on goal.

The No.15 proceeded to brush off a challenge before coolly finding the back of the net.

Alisson Becker denied West Ham a quick response as he palmed away Robert Snodgrass' long-range effort. The Brazilian then batted away a Declan Rice shot. Liverpool were fortunate as Trent Alexander-Arnold nearly put the rebound into his own net, only for the ball to strike the post and bounce clear.

But the framework at the other end denied Liverpool a third when Salah attempted a curler from the edge of the box that struck the base of the post.

The two-goal advantage remained intact thanks to another crucial intervention from Alisson. The Liverpool No.1 pulled off an outstretched save to turn Rice's header behind for a corner.

Klopp's men then closed the game out to record win No.23 of the top-flight campaign.