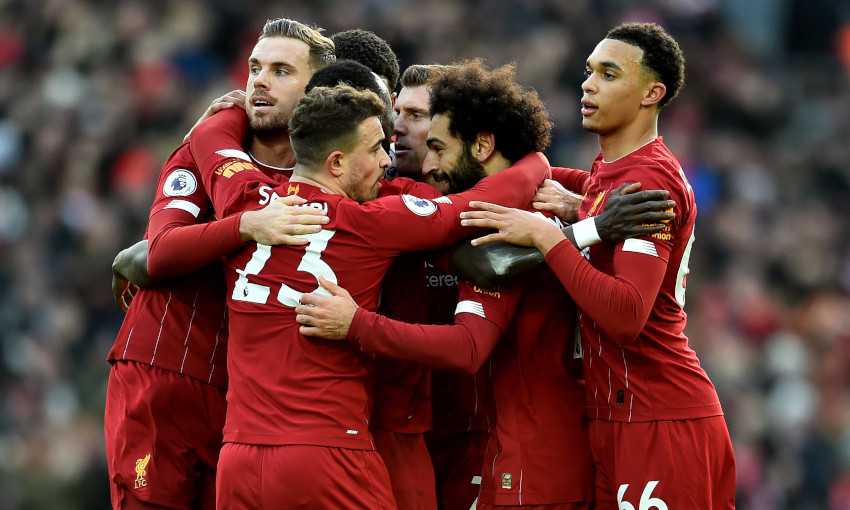 The Egyptian picked out the top corner with a clinical curler on 38 minutes at Anfield, where the Reds had to dig deep in the face of a classy performance by the visitors.

Ultimately, they saw it out and Salah’s last-minute flicked finish clinched the three points – their 16th win in 17 league matches this term – and maintained their lead at the summit before setting off for the FIFA Club World Cup in Qatar next week.

In addition to the enforced change of Joe Gomez in for the injured Dejan Lovren, the manager also included James Milner and Xherdan Shaqiri in place of Andy Robertson and Naby Keita.

The opening 20 minutes were, for the most part, deadlocked.

Ismaila Sarr had produced a dangerous early cross into the area for Troy Deeney, in a pocket of space between Gomez and Trent Alexander-Arnold, but the Watford captain could not connect.

But there was little else in terms of genuine opportunities, Jordan Henderson slicing a loose ball over and Salah whipping a shot off target after running onto Roberto Firmino’s pass into the right channel and showing neat footwork to fashion room to strike at goal.

It was a different story from the 37th minute on, however.

Abdoulaye Doucoure should have put the Hornets in front at that point. Etienne Capoue broke into the box and squared to his fellow midfielder, who was unmarked but completely miscued the shot. Gomez slid in, crucially, to block Gerard Deulofeu on the rebound.

Within seconds, Liverpool took the lead.

Firmino sprung a counter-attack by lofting a ball over his head out to Sadio Mane on the left and he quickly prodded a forward pass to Salah, one-on-one with Kiko Femenia.

The Egyptian stepped inside the full-back and, just when it looked like Watford’s recovering defenders might deny him, dispatched a clinical curler into the top corner off his right foot. 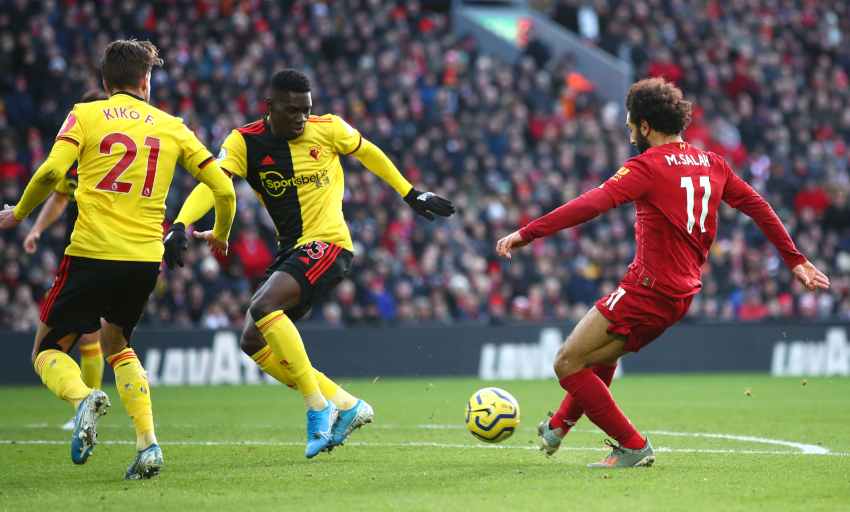 The away team squandered another golden chance three minutes before the break, Sarr emulating Doucoure after Deulofeu’s cross was pushed into his path by Alisson Becker.

And Mane was prevented from making it two for the Reds despite rounding goalkeeper Ben Foster from Salah’s set-up – Christian Kabasele recovered to nick the ball away.

Mane thought he had doubled Liverpool’s advantage five minutes after the restart.

In a move reminiscent of Georginio Wijnaldum’s second goal against Barcelona in May, the ball was nudged by Milner to Shaqiri on the left wing and his delivery was headed in, this time by the Liverpool No.10. But a VAR review judged him to be marginally offside.

Watford soon created a big chance to compound that disappointment; Deulofeu raced free in behind and held off Alexander-Arnold before swiping at goal – but Alisson blocked brilliantly.

There was a different setback for Jürgen Klopp’s men, though – Wijnaldum was forced off injured in the 58th minute. On came Robertson at left-back, Milner moving into midfield.

Firmino rolled a diagonal effort too close to Foster and Salah was then unable to convert a one-on-one with the stopper from Milner’s through ball.

Klopp sent on Alex Oxlade-Chamberlain for Shaqiri and there was a real chance for Firmino, found in the middle by Robertson, but the No.9’s shot was harmless after deflecting off Will Hughes.

Virgil van Dijk was relieved to see a misplaced back pass to Alisson roll wide and Deulofeu swerved the subsequent corner onto the outside of the near post as Watford tested Liverpool’s resolve.

But the hosts held firm and Salah finally settled it with 90 on the clock – backheeling in from substitute Divock Origi’s blocked strike – to ensure they break for a tilt at becoming world champions with their Premier League title charge still on course.