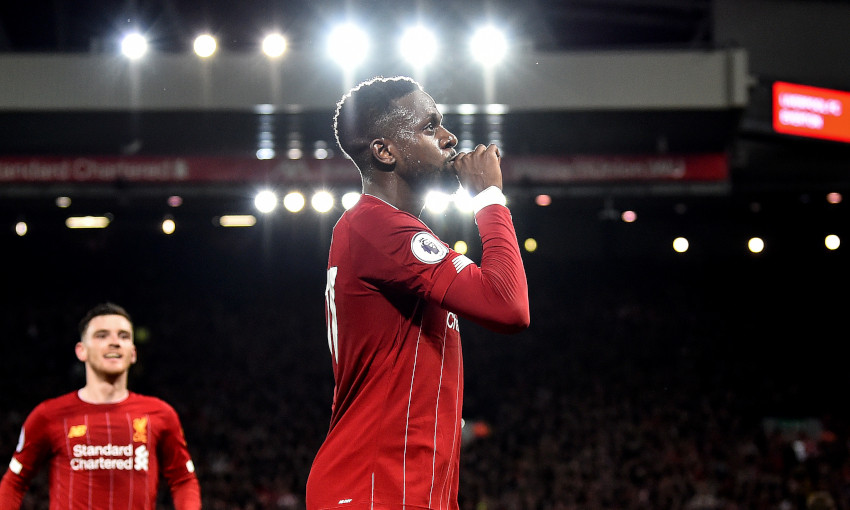 Divock Origi was a Merseyside derby hero again with two goals as Liverpool won a frantic clash with Everton 5-2 at Anfield on Wednesday night.

The Belgian kicked off the scoring after just six minutes of the Premier League meeting with a sweet touch and finish from Sadio Mane’s sublime through ball – and there were five more goals in the opening 45 minutes.

Xherdan Shaqiri, Origi and Mane each netted in fine fashion for the Reds, who produced spells of scintillating football, while Michael Keane and Richarlison responded for the Blues to keep the contest alive.

And Jürgen Klopp’s side sealed it in the 90th minute with a Georginio Wijnaldum effort to make it 14 wins out of 15 in the Premier League this season.

Liverpool therefore maintained their eight-point lead at the top of the table and made history with their 32nd consecutive league game unbeaten – a new club record.

In addition to an enforced change in goal – where Adrian replaced the suspended Alisson Becker – Klopp made four other alterations to his XI.

Adam Lallana and James Milner came into midfield, while Origi and Shaqiri joined Mane in the Liverpool front three.

Anfield showed support and solidarity for the Hillsborough families, survivors and campaigners before kick-off with a special mosaic on the Kop and a period of applause.

The Reds evidenced their tactical intent in the first minute when a Virgil van Dijk pass out to Andy Robertson allowed the left-back to swing in a cross that Mane headed over.

But an attack from the same flank paid dividends with six on the clock.

Lallana fed Mane in the left channel and the Senegal international – fourth in the Ballon d’Or rankings on Monday night – produced an exquisite defence-splitting pass to pick out Origi’s run through the middle.

The striker’s first touch took him around Jordan Pickford as the Everton goalkeeper rushed out and clinically created an open goal to find.

Not content with one sumptuous assist, Mane chalked up another just past the quarter-hour mark.

Trent Alexander-Arnold smacked a pinpoint crossfield pass to the No.10 on the wing and this time he carried the ball himself to the edge of the box, until the time was right to nudge it into Shaqiri’s supporting run. And he made no mistake with an angled clip across Pickford. 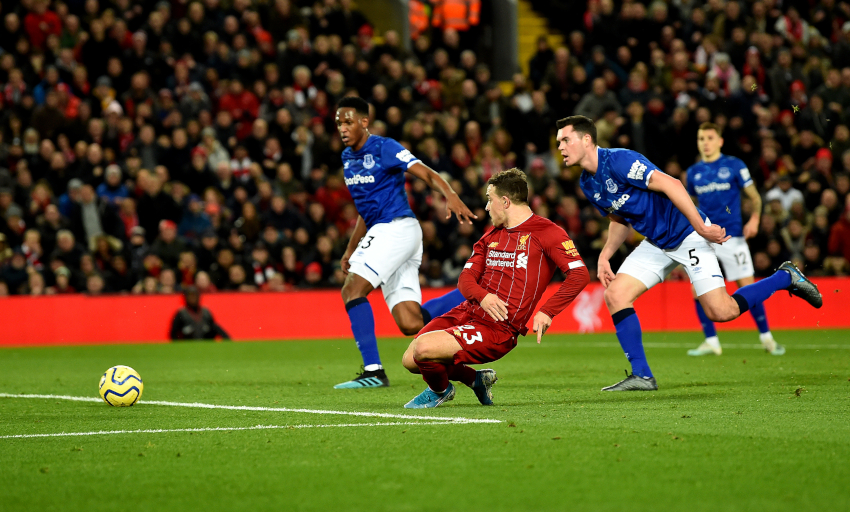 Anfield was buoyant but the atmosphere was punctured temporarily midway through the half.

Richarlison had already headed over the bar before Dejan Lovren’s attempt to clear Alex Iwobi’s delivery from the right hit Keane and fell for the Everton defender to deftly lift over Adrian.

The visitors’ penalty appeals were then waved away after late pressure from Van Dijk forced Dominic Calvert-Lewin to fire wide from inside the box.

And on 31 minutes, the Reds struck again.

Lovren’s precise long ball from his own half was brilliantly controlled by Origi and the Belgian followed up with an emphatic strike over Pickford to restore a two-goal advantage.

Only a miraculous touch by Lovren in the six-yard area prevented Calvert-Lewin from converting a minute before half-time – but there were still two more goals before the break.

Alexander-Arnold led a blistering counter-attack and eventually teed up Mane, who dispatched a curling left-footer past the reach of Pickford, and Richarlison headed beyond Adrian at the other end from substitute Bernard’s cross. 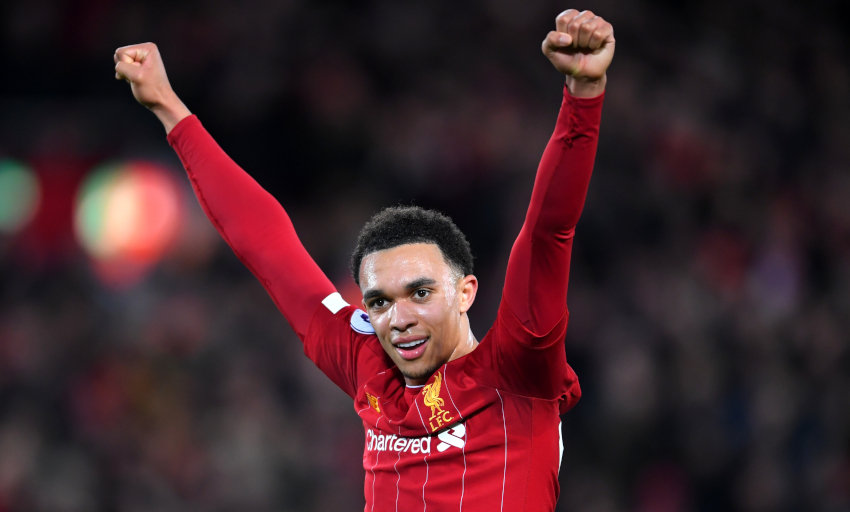 Inevitably, there was a calmer nature from the outset of the second half with Liverpool working more methodically as Everton looked for a third.

Lucas Digne swept a free-kick outside the upright from the right channel and Richarlison headed too close to Adrian from a corner in the efforts of reasonable note.

Henderson almost helped to seal victory for sure with a pass over the top to Mane, who looked a certain scorer from 12 yards with a side-footer but sent the ball wide of the right post.

The same pair combined again in the final 10 minutes, Mane breaking the offside trap to collect but failing to convert under pressure from Mason Holgate after rounding Pickford.

Immediately at the other end, Moise Kean kept himself onside to surge into a one-on-one from Iwobi’s pass and dragged his shot away to the left.

So the final say went to Wijnaldum, with a spot of help from Firmino’s nimble footwork, the midfielder swiping a strike into the Kop net to wrap up an emphatic derby triumph for the Premier League leaders.