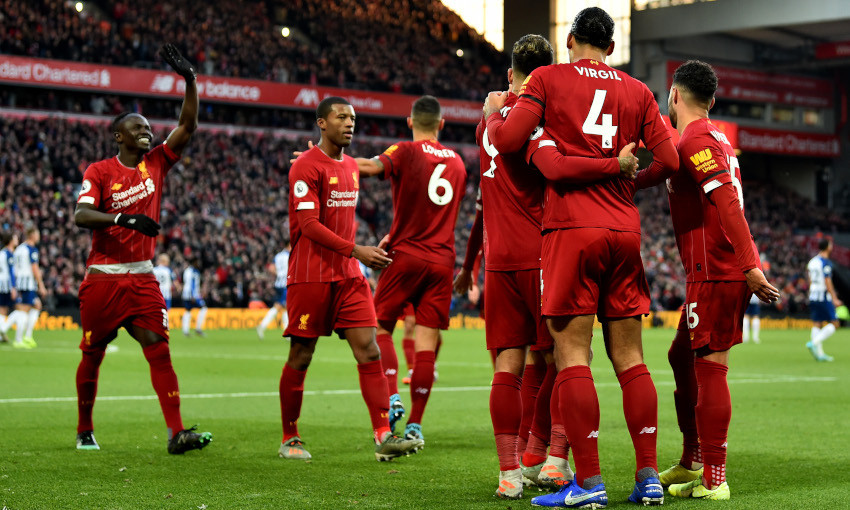 Liverpool moved 11 points clear at the top of the Premier League table with a 2-1 victory over Brighton and Hove Albion at Anfield on Saturday.

However, Alisson Becker was shown a red card with 16 minutes remaining after handling Leandro Trossard’s shot outside of his area and Lewis Dunk converted the resulting free-kick to grab one back for the visitors.

It made for a nervy finish, but Liverpool held on to strengthen their grip on top spot in the table.

Liverpool made three changes to their starting line-up, with Alex Oxlade-Chamberlain, Georginio Wijnaldum and Alexander-Arnold coming in for the injured Fabinho as well as James Milner and Joe Gomez.

With Manchester City having been held to a 2-2 draw at Newcastle United in the day’s early game and Leicester City not in action until Sunday, Liverpool kicked off knowing they could significantly extend their lead at the top of the table with victory.

Eleven minutes had elapsed when the Reds fashioned their first half-chance of the afternoon, Mohamed Salah prodding into the side-netting from an acute angle after exchanging the ball with Roberto Firmino.

A better opportunity arrived soon after, but Firmino’s low drive from Sadio Mane’s surge and pass down the left was beaten away by Mathew Ryan.

Nevertheless, the early breakthrough craved came with 18 minutes on the clock. Alexander-Arnold swung in a free-kick from the right, which Van Dijk nodded into the back of the net after rising above his marker. 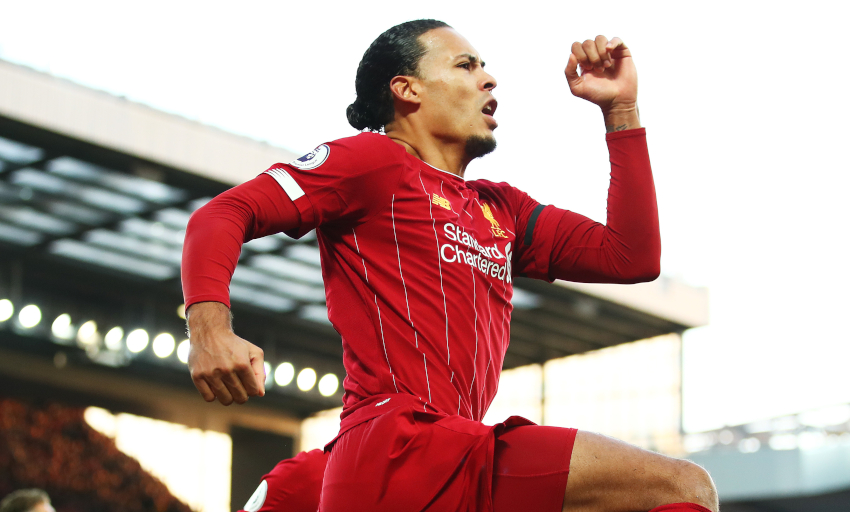 And the Seagulls had Ryan to thank for not finding themselves further behind almost immediately as he produced two spectacular saves at point-blank range to thwart Firmino and then Mane in the space of 60 seconds.

However, the stopper was rendered a spectator when Liverpool did claim their second as Van Dijk benefited from another Alexander-Arnold delivery, this time heading in from a corner at the near post.

Brighton threatened to reduce the arrears when Davy Propper weaved into space inside the box, but had a drive beaten away by the gloves of Alisson.

Dunk then spurned an opportunity when the visitors recycled a corner back into the box, shinning his half-volleyed effort wide when unmarked.

By this point, the Seagulls were enjoying their best spell of the contest – and Propper again tried his luck, this time seeing his shot deflect behind off Dejan Lovren.

But in the final minute of the half, Ryan was again called into action. This time, he needed to repel Oxlade-Chamberlain’s side-footer after Salah had teed up the No.15 just inside the box.

While Liverpool’s advantage at the midway point was a strong one, Brighton had created some moments of concern during the opening 45 minutes.

And they went close to halving the hosts’ lead again soon after the restart, with Dunk glancing a header across goal and wide from a corner.

Then, just after the hour, Aaron Connolly’s turn and low strike brought a stop out of Alisson.

At the other end, Andy Robertson’s tenacity created a chance for Oxlade-Chamberlain, but he was left clutching his head in his hands as Dunk managed to block the goal-bound drive.

Mane then scuffed wide from a Wijnaldum pull-back as Liverpool began to stir once more. Adam Lallana replaced Salah soon afterwards before Divock Origi entered the action for Firmino.

The Reds also needed to call on the services of another substitute – Adrian – for the final moments when Alisson was shown a straight red card for stopping Trossard’s effort with his hand outside of the area.

From the resulting free-kick, Dunk’s quickly-taken shot found the bottom corner to set up a tense finale.

Aaron Mooy saw a drive punched away by Adrian and Neal Maupay’s header needed to be collected by the stopper at the second attempt as the game edged towards a conclusion.

However, Liverpool were able to see out four minutes of stoppage-time to move 11 points clear at the division’s summit.