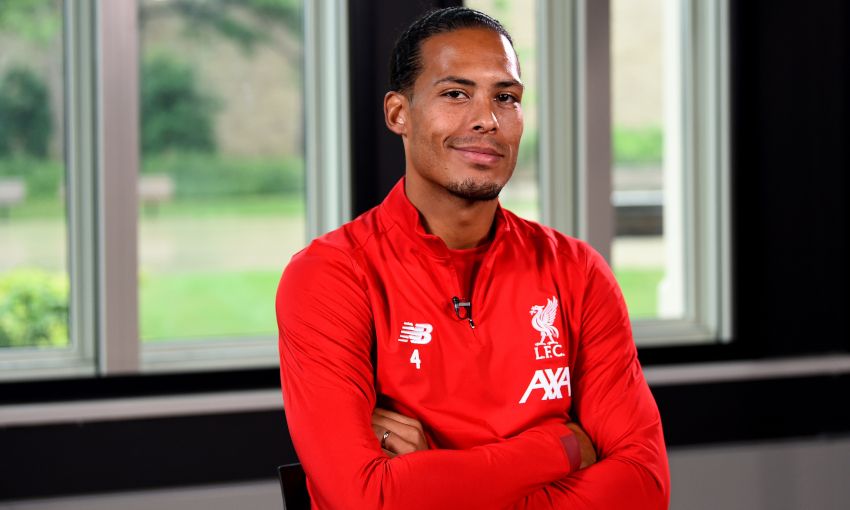 Virgil van Dijk is focused on slaking his thirst for more trophies with Liverpool, rather than securing the Ballon d'Or, because it's something directly in his control.

The centre-half is being tipped to claim football's biggest individual prize after a stellar 2019 saw him named PFA Players' Player of the Year and win the Champions League.

But with the destination of the Ballon d'Or decided by journalists, national team coaches and captains, all Van Dijk is currently concerned about is putting away more medals in his safe at home.

Read on to discover what the Reds No.4 had to say when he sat down with Liverpoolfc.com during the club's pre-season tour of the USA for a wide-ranging interview...

You're back for a new season, but how do you reflect on what was achieved in the last campaign?

Obviously, it was an amazing season personally, but with the team as well. It could have been even more special and amazing if we won the Premier League, but I think we made a lot of progress over the year, year-and-a-half that I've been with the club. I think the club already made so many steps before I arrived as well. We're on a good way and that was shown last year as well. This year we start all the way from the bottom - like basically with nil - and everyone has to fight for everything. We will try to achieve at least what we achieved last year and even do better hopefully.

How do you look back on the Champions League final now after having a little bit of time to digest it?

It was an amazing day for me, for the team, for everyone that bleeds red and supports Liverpool. It was a fantastic feeling that I had after the game, I couldn't really describe it. I had to switch pretty quick, two days after I had to meet up with the national team and play in the Nations League. After that I had a proper break and could really, like, think about everything that happened over the year and over the season. In the first two weeks I really didn't do anything and then you start doing something already for the new season.

What stands out to you from the celebrations on the pitch or parading through the streets of Liverpool?

I think when the final whistle went there was a relief, crazy feeling – I can't really describe. But the day after on the parade, that was unforgettable. So many people were out there and welcoming us back and cheering us on. It was something special. I will never forget it in my whole life.

What was it like to look out and see that sea of people during the parade?

Where do you keep your medal?

Have you ever wore it out?

I keep it in the safe and hopefully when I end my career I have a couple more medals, trophies and can put them somewhere nice.

How do you reflect on the 2018-19 season from a personal point of view?

I was most happy with the fact that I've played so many games on a consistent level and could help the team. To end with winning the Champions League was then the most important thing of the season. We were so close with the Premier League and we played some fantastic football throughout the year. Obviously, we had a couple of games where we could've done better, but we tried everything that we could last year and there was only one team that was a little bit better than us.

To get the PFA Player of the Year is a fantastic honour, it's the highest honour you can get because it's voted for by your fellow peers. I said it back then as well, I would trade it for the Champions League. Luckily, I didn't have to.

People are now putting you in contention to win the Ballon d'Or award. What's your reaction when you hear your name mentioned in that kind of standing?

It's an honour if people are talking about it, but what can I do? I have no influence on anything. The people that have an influence on it, they have to decide who's going to win it. I can't deny that I've had a pretty good season last year, so the only thing I can do now is just focus on the new season, getting fit, stay fit and hopefully get an even better season than I had last year.

It's hard for you defenders to win these kind of awards, Fabio Cannavaro in 2006 was the last one. You don't get the headlines as much as the guys who score the goals...

Maybe now, I don't know. I can understand the fact that normally strikers or No.10s win these kind of awards because it's more attractive to see. But maybe the time has come to change it.

When you sat down and spoke with the manager about coming to the club, could you ever have imagined it would've gone this well so soon?

Obviously, I'm full of confidence in my teammates before I arrived. I saw the quality Liverpool has and, combined with the fans, we can be such a fantastic and difficult team to beat. To be in a final within the first six months I arrived was a big bonus, but to win the Champions League one-and-a-half years after I arrived is something I want to build on. I want to achieve so many good things with this team. We have a fantastic team, great players, fantastic manager. On top of that, we have an amazing support that will always be there. It makes it difficult for any team that we're going to face.

When the manager outlined his vision for where this team was heading, was it easy to buy into it?

How do you look back on the recent Premier League season? Narrowly missing out on the title...

I don't know how to say it, but I can put it away because it's pretty simple – Manchester City were just a little bit better. If people say that we could've done better then they are wrong I think. We only lost one game in the whole season. We had so many points, we broke the record for Liverpool and Premier League points total. We did everything that we could but the only thing was that City were just a little bit better. We have to respect that.

It's not that we're not going to try this year, it's not that we're going away. We're going to try to do even better than we did last year. It's going to be very hard because Man City will be stronger again, the other teams will be stronger again as well [as] they try to get to that level too. To lose it that close was disappointing at the time, but I could put it away straight away because the fact is that they were just a little bit better back then.

I enjoy every bit of it. I'm enjoying every bit that I'm out there showing my qualities, showing our team's qualities to defend to everyone who's watching. You have to enjoy it because before you know it, it's over.

What's the target for you this season then?

Stay fit, play as many games as possible, play consistent. [They're] my personal targets. As a team we're going to try to compete in every competition and obviously it's going to be hard because there are so many and the league is so tough as well, but the only thing we can do is try. We will give everything that we've got and we have the quality as well. We'll see where that leads us.