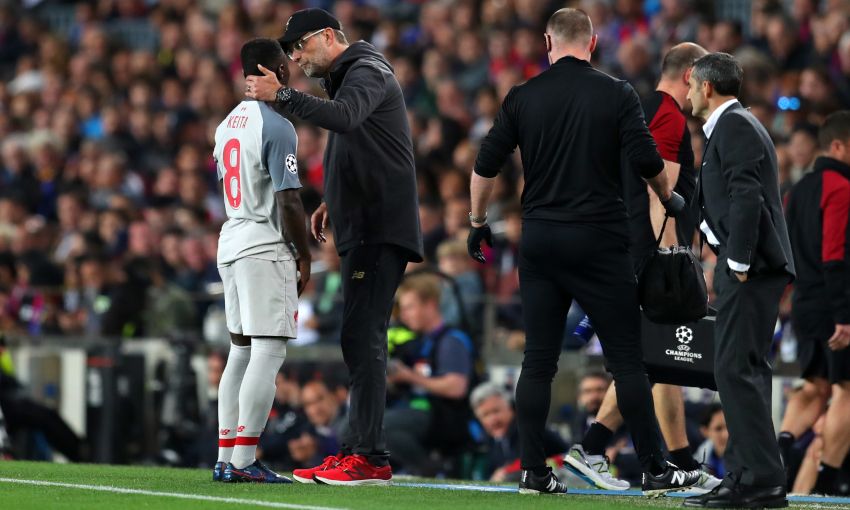 Jürgen Klopp confirmed Naby Keita is set to miss the remainder of the season after sustaining what he described as a ‘very serious’ injury against FC Barcelona on Wednesday evening.

The midfielder suffered an adductor issue in the early stages of the Reds’ trip to Camp Nou, forcing him from the field after just 24 minutes.

Klopp revealed during his pre-Newcastle United press conference on Friday morning that Keita is set to be sidelined for around eight weeks.

The manager said: “It was really unlucky. Bad news, he has a high-grade adductor injury; the tendon is ruptured, which keeps him out for at least two months.

“Bad news for us obviously, but bad news for Guinea as well because the Africa Cup of Nations is coming up.

The injury is not only set to rule Keita out of Liverpool’s remaining games of the campaign, but also Guinea’s Africa Cup of Nations tournament, which is due to get under way on June 21 in Egypt.

“I’m sure he’s not in the best moment but he’s OK,” Klopp continued. “I think there are two things - a very interesting part of the season and he is not part of [it], that’s one thing.

“On the other hand, I don’t think Guinea are a regular starter for the Africa Cup of Nations, so I’m sure that was a big, big target for him as well.

“Of course, he is not in a good moment, but that’s the moment when you have to help the players and we will try everything we can.”

Meanwhile, Klopp admits Liverpool will need to check on the fitness of Roberto Firmino ahead of Saturday’s trip to St. James’ Park.

“We will see, we will see,” he replied when asked whether the Brazilian would be available for the encounter with Newcastle.