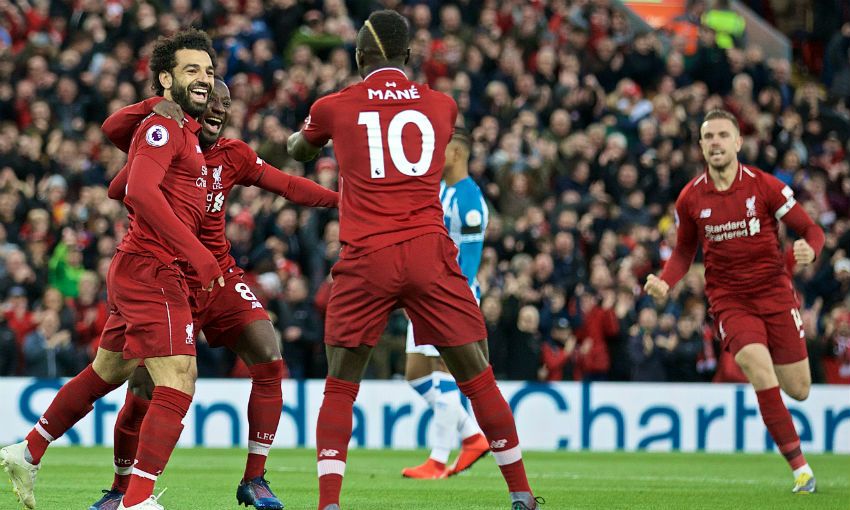 Jordan Henderson believes Mohamed Salah and Sadio Mane will continue scoring 'for fun' as long as Liverpool carry on providing them with sightings of goal.

The duo both bagged braces in Friday night's 5-0 win over Huddersfield Town at Anfield that took the Reds back to the top of the Premier League.

Salah's push to retain the Golden Boot was boosted as he moved ahead in the standings, taking his league tally to 21, with Mane trailing by just one.

In addition to their goalscoring output, Henderson also praised the defensive effort delivered by those up front.

The captain told Liverpoolfc.com: "It's amazing. The work-rate as well, which people don't look at as much [because] they want to look at the goals.

"They work hard for the team and when they get in front of goal they're clinical. That's the most important thing.

“They keep getting in the right areas and if we keep feeding them then they'll score goals for fun."

Roberto Firmino was forced to sit out the Huddersfield win with a slight muscle tear.

Daniel Sturridge replaced the Brazilian in the starting line-up, with Alex Oxlade-Chamberlain and Xherdan Shaqiri also contributing from the bench against the Terriers.

"When you're a player you just want to keep playing games and the lads that came on gave us a boost," Henderson added. "I thought Studge did brilliant coming in for Roberto.

"All really good signs, so we need to keep that going until the end of the season."

Liverpool's attention now turns towards Champions League matters ahead of the start of a semi-final tie with Barcelona.

The Reds travel to Camp Nou on Wednesday for the first leg before hosting the return fixture at Anfield on May 7.

Henderson concluded: "We all know how difficult it is to go to Barcelona, but it's a huge game that everyone wants to be involved in and play in.

"It'll be a great occasion, but one where we've got to be fully focused on what we need to do because they're a good side and we've seen how good they can be, especially at the Nou Camp.

"[It'll be a] Tough game, but one that we're really looking forward to."