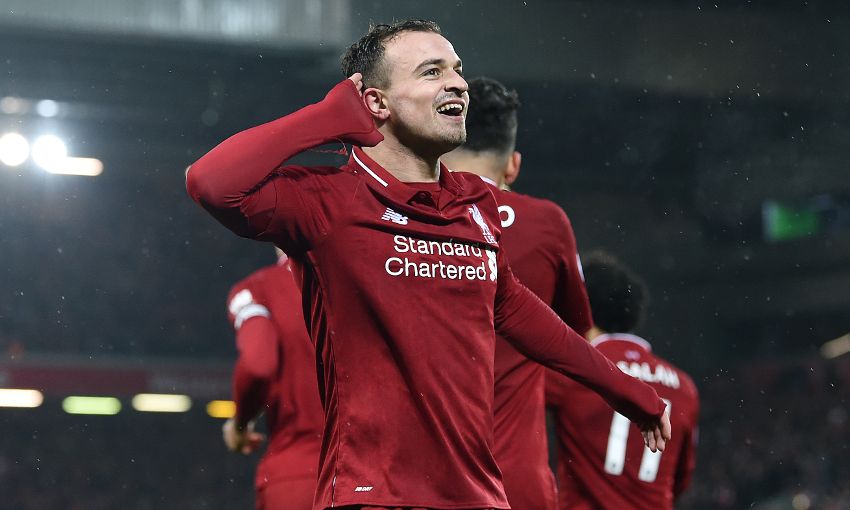 Xherdan Shaqiri admitted his delight with a match-winning impact from the bench in Liverpool's 3-1 victory over Manchester United at Anfield.

The arch-rivals were locked at a goal apiece in their Premier League clash when Jürgen Klopp sent on his No.23, who scored the first of his crucial double 144 seconds later.

Shaqiri then added a third to put the game beyond United, a result which lifted the Reds back to the top of the table and extended their unbeaten start to 17 matches.

And, speaking to Liverpoolfc.com after the final whistle, the Switzerland international explained how he used his natural disappointment with being a substitute as motivation to influence the outcome when he got a chance.

“Every player is not happy when he is on the bench, that’s pretty normal. But only 11 players can play – the coach decides,” said Shaqiri.

“I always try to make an impact when I come on or play from the beginning. Today was a very good impact with the two goals, I’m delighted.”

He added: “It was an amazing win and important, too. We played very well. In the second half, we did more than Manchester United – we tried and tried. In the end, we fully deserved to win this game.

“When you see the statistics, we did everything in this game to win. It was very intense and we kept the high intensity in this game. It was an important win and a nice win against Manchester United.”

Including the Anfield win over Brighton and Hove Albion in the final Premier League fixture of last season, Liverpool are now undefeated in 18 games in the competition.

That run has set a new club record, while the victory moved the Reds back above Manchester City – who beat Everton on Saturday – by a point.

Shaqiri believes his side can maintain their challenge at the summit if they continue to produce the character and quality on show against United.

“Our start to the season is amazing – a record in the club’s history,” he said. “But we have to keep going, we have to take it game by game.