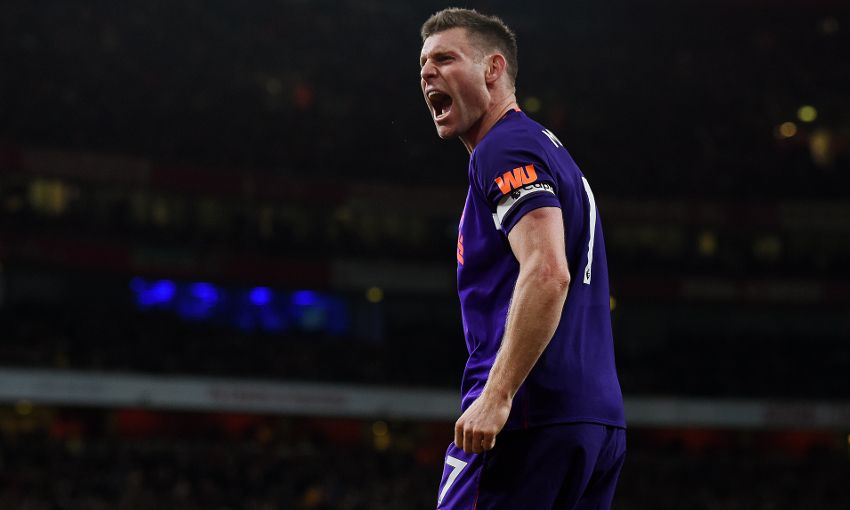 Jürgen Klopp compared James Milner to a fine wine after the Liverpool vice-captain struck his 50th Premier League goal at the weekend.

The midfielder put his side ahead at Emirates Stadium on Saturday but the Reds had to settle for a point from the Premier League clash with Arsenal as Alexandre Lacazette fired a late equaliser.

Klopp’s men gained greater control of the contest after the interval thanks to a tactical adjustment and, the manager has revealed, some strong words from Milner.

“I like the idea that we write a story about James Milner after the game,” said the German following the 1-1 draw. “Millie is like wine – a very good red one.”

Explaining how and why Liverpool’s half-time changes occurred, Klopp continued: “When you have a compact formation you give the opposition the opportunity to pass into a certain place and then you press. It’s not that complicated.

“But Arsenal had two or three options to pass the ball, and that makes life pretty uncomfortable for the three midfielders. We were too high on the wings.

“We’ve done it outstandingly well in the past but we didn’t do that in the first half. Millie was the one who saw it for us. He was not happy about it, he was animated.

“That’s how it is in the dressing room; a lot of men with testosterone. Usually the only one talking is me, but sometimes before I start talking the boys have a few words.

“It’s good that we could change it at half-time. And he was the right person to score the goal. Of course he is a leader. He is a proper leader.

“The problem wasn’t the three that played [in midfield]. We couldn’t change – we had no defensive midfielder on the bench, which meant it was really difficult.

“Hendo wasn’t there. Then we had to think size-wise at set-pieces, to make sure that was organised. It was not too cool. The best way to go into a game is to do it right from the first moment and we can build on that, and we didn’t do that.