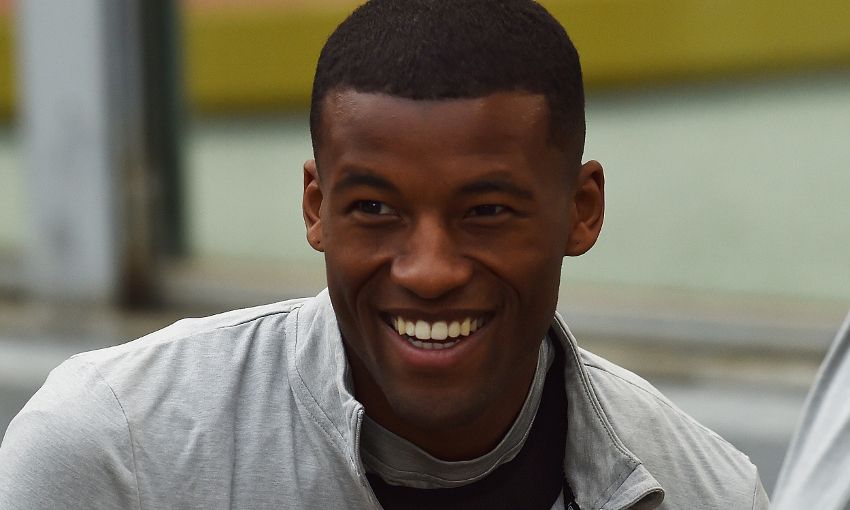 The thought of Liverpool competing in the Champions League final is a constant in Georginio Wijnaldum's mind as the midfielder targets a place on Europe's grandest stage.

AS Roma and 90 minutes of football stand in the way of the Reds achieving an eighth appearance in the showpiece fixture in Kiev later this month.

Jürgen Klopp’s side travelled to Italy on Tuesday afternoon in possession of a 5-2 advantage in the tie courtesy of an often-astounding attacking display at Anfield last week which reinforced the team’s position as the tournament’s most prolific scorers.

Roma’s late rally on Merseyside – two goals in the final 10 minutes – and comeback from a three-goal deficit in the previous round against FC Barcelona ensure nothing will be taken for granted in the Stadio Olimpico second leg.

Wijnaldum does dream about the final, though, because it provides even greater motivation.

“I really think about it. We’re so close, it’s almost impossible not to think about it,” the Netherlands international told Liverpoolfc.com.

The No.5’s mindset for this crucial game is borne out of his general philosophy in football. Pre-match nerves are warded off by prayer and gratitude.

“I enjoy the moment and the situations I’m in because they’re not normal situations,” he explained. “A lot of players don’t ever play in those situations and atmospheres – big games, semi-finals, the Champions League. So I just try to enjoy it.”

LFCTV GO: Relive the Reds' first-leg victory over AS Roma

He certainly relished his unexpected opportunity in the first meeting between the clubs.

Sent on for the injured Alex Oxlade-Chamberlain just past the 15-minute mark at Anfield, the Dutchman turned in one of his most effective Liverpool performances to underpin the magical exploits of Roberto Firmino, Sadio Mane and Mohamed Salah.

So, is the plan simply ‘same again’ in Rome?

“It always helps if you’re in the lead, especially by three goals. It always gives you a good feeling and confidence.

“[But] it’s better to try to play like it’s the first game, then we’ll do what we have to do with 100 per cent and really intense. We mustn’t feel too comfortable with the situation we’re in right now because it can change – they already showed against Barcelona that they are capable of doing that. So we have to be aware.”

Wijnaldum’s chance in the first leg came out of dreadful bad luck for a teammate.

Oxlade-Chamberlain’s sliding tackle on the right touchline seemed routine until the Englishman immediately signalled for treatment from the club’s medical staff.

“[We were] devastated. The way he got injured was really unlucky,” said Wijnaldum.

“With football, there is no guarantee you will stay fit but in his case he was really unlucky; he was trying to defend the ball and he had an injury from it.

“We hoped it would not be that bad. We felt bad for him because he was an important player for us and also a great person in the dressing room. He has settled in really well since he came here – that makes it even harder for him and for us as a team.”

An appearance for Wijnaldum at the Stadio Olimpico would be the 47th of his season.

Juggling the intensity of the Champions League latter stages with the bread and butter of the Premier League has challenged Klopp’s squad – with injury misfortune not helping either.

The 27-year-old admitted the recent demands have taken a toll but, in fact, he wouldn’t have it any other way.

He noted: “The end of the season is always harder than the beginning. The way we play is also really hard and really intense, but I enjoy playing like that.

“After a long season, you’re really tired. We play a lot of games because of the Champions League, and a lot of players go to their country to play international games. That makes it even harder.

“But as a footballer you want to play as many games as possible. The complaining has to come at the end of your career!”

On the eve of the decisive match in Rome, the manager reiterated his common request for Liverpool to be ‘brave’ in the face of a partisan home crowd and the high stakes at play on Wednesday night.

It’s a message that was inspirational in Manchester last month.

“In the game against City we showed in the first half that we were not brave enough to play our game, to press high and play football – the things we’re good at.

“But at half-time, he showed us we could create chances if we were brave to play and brave to defend high instead of deep. That’s what we have to do. We have to be brave. When we’re brave and try things we’re good at, we play at our best.”

That night, it was Salah who took the sting out of the proceedings. A counter-attack concluded with the Reds’ top scorer delicately lifting a finish over Ederson and into the net. Game over.

A repeat in Rome would be priceless, according to Wijnaldum.

“That would be unbelievable. I think it’s the most beautiful thing we can do,” he said when asked about the common football cliché, ‘silencing the crowd’.

“We did it at City; their crowd was unbelievable in the first half, they were supporting their team and after the goal [for Gabriel Jesus] they went crazy.

“But as soon as Salah scored, you didn’t hear the noise anymore. That was a great feeling. That’s what we have to try to do in this game again.”