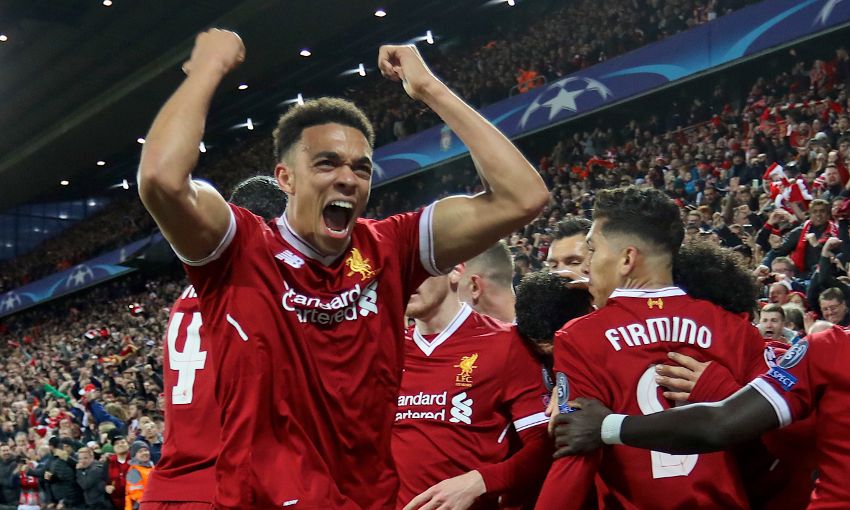 Trent Alexander-Arnold lived out a dream on Wednesday night.

Having grown up watching Liverpool compete and conquer at the elite European level, the right-back turned in a Man of the Match performance to help his side establish a 3-0 lead in their Champions League showdown with Manchester City.

Alexander-Arnold was a composed and resolute figure in the face of the visitors’ fearsome attack on a night when the team and the fans combined to put the Reds in command of the quarter-final.

“It’s up there with the best ones,” the Scouser told Liverpoolfc.com.

“It’s always good to be involved in special nights like that at Anfield. It’s the stuff dreams are made of; you dream of it as a kid growing up wanting to play in these types of games.

“I was grateful for the opportunity and the manager’s trust to put me out there in such an important game for the whole club. The fans were behind us, it was an unbelievable atmosphere and the performance goes down to them in the end.”

If Pep Guardiola had identified the left side of City’s attack – specifically, Leroy Sane – as a viable route to the Liverpool goal, his team found Alexander-Arnold a formidable obstacle.

The No.66’s decision-making and timing was outstanding throughout the 90 minutes, though the man himself credited others for supporting him in the task.

“Sane is a top-quality player. He’s probably one of the best wingers in the league, if not the world. He was a really tough opponent,” said the defender.

“It goes down to the likes of Ox, Gini when he came on, Mo and Hendo for helping me. If you’re left one-on-one with such a talented winger you’re going to get caught out. Thanks to the lads I mentioned, I wasn’t left one-on-one too often and I always had cover around me. That’s what helped me.”

A nine-minute second-half blitz carried Liverpool to a 4-3 win against City in the Premier League in January – to date, their only defeat in the division this term.

It was a similar story this time, too, as Mohamed Salah’s 12th-minute opener was followed by an Alex Oxlade-Chamberlain piledriver on 20 and Sadio Mane’s header with half an hour played.

Asked for details of Jürgen Klopp’s instructions to the players, Alexander-Arnold said: “To make sure we were on the front foot from the very start, to make sure we got after them and tried to win the ball back high and put them under as much pressure as possible.

“The two games we’ve had at Anfield, the 4-3 and this one, that’s what we’ve done best – put them under pressure – and they couldn’t really cope with it on both occasions.

“That’s what we pointed out during the week: how we got the win in January. We used that to our advantage and tried to do the same again.”

City mounted pressure during the second half without ever genuinely threatening Loris Karius’ goal, meaning one Liverpool strike at the Etihad Stadium next Tuesday would leave the opposition needing five to progress.

“The clean sheet is just as important as the three goals we scored,” added Alexander-Arnold.