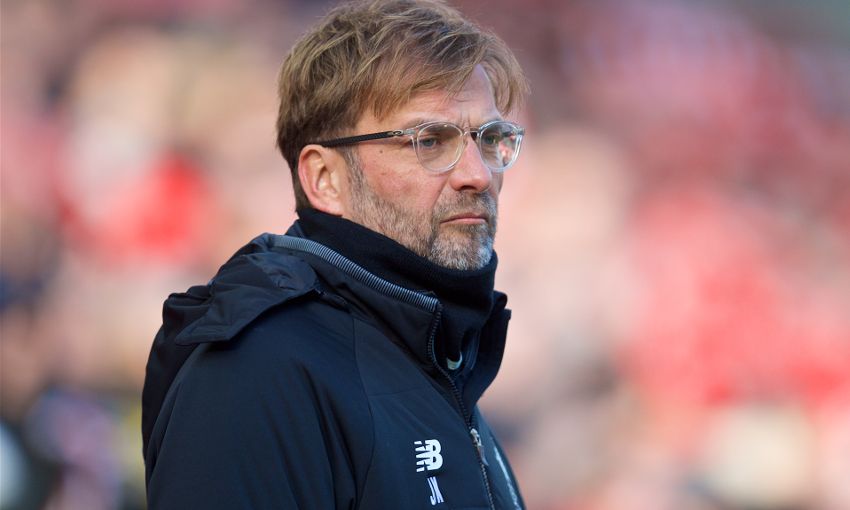 Liverpool surpassed the 100-goal mark for the season at the weekend but Jürgen Klopp spent little time celebrating the achievement.

Emre Can’s header half an hour into the Premier League clash with West Ham United brought up a century for the Reds in just their 40th fixture of 2017-18.

In trademark fashion for a campaign that has seen Klopp’s side score seven goals in a game twice, five goals three times and now four on six occasions, they racked up three more after the interval to win 4-1.

But with the battle for a place in the top four only intensifying as matches run out, Klopp is more concerned about the strikes to come than those in the bank.

“A nice number… but we cannot stop,” the manager told Liverpoolfc.com.

“We have a lot of games to play still. I have said it a lot of times: we have created a proper basis, that’s it. If we hadn’t played football like this or the last game or the game before that, we could not be where we are.

“We know with the quality we have we are responsible for good results. The only problem we have is that there are a few other teams with quality as well.

Mohamed Salah’s low effort against the post in the third minute set the tone for a match that was full of chances, with the Hammers a consistent threat on the counter.

But Liverpool took control after Can headed home – the result of a training-ground routine – and second-half goals from Salah, Roberto Firmino and Sadio Mane rendered Michail Antonio’s conversion mere consolation.

Klopp was so satisfied with the manner of the victory, and the contribution of the Anfield crowd, that he eschewed his natural tendency to avoid hyperbole as he assessed the afternoon.

Watch: Extended highlights of the win over West Ham

“We played fantastic football in a few moments. Usually as a manager my job is probably to cool things down a little bit, but it’s really difficult. I’m really happy about the performance,” he said.

“I knew how difficult it could be against West Ham, against a David Moyes team. The first 10 or 15 minutes were ours and then [Marko] Arnautovic with a little chip – it was a fantastic save from Loris [Karius]. That can all happen. It didn’t happen and I really think it wouldn’t have been deserved, but you have to take it like it is.

“Then we really played, in a few moments… wow, great football. We were really flexible and fluent, aggressive, kind of angry, full of desire, full of passion. I really loved it.

“The best thing of all was our counter-pressing; it was so difficult for West Ham to deal with. You cannot come through all the time with each pass or offensive situation. But if you don’t come through then win the ball back.

“And I really loved it how the crowd reacted in those moments, we’re getting used to it that it’s like a quarter-goal – win the ball back and ‘come on, try again, chip the ball here, pass the ball there’.

“We had really nice football moments and I’m happy about that.”