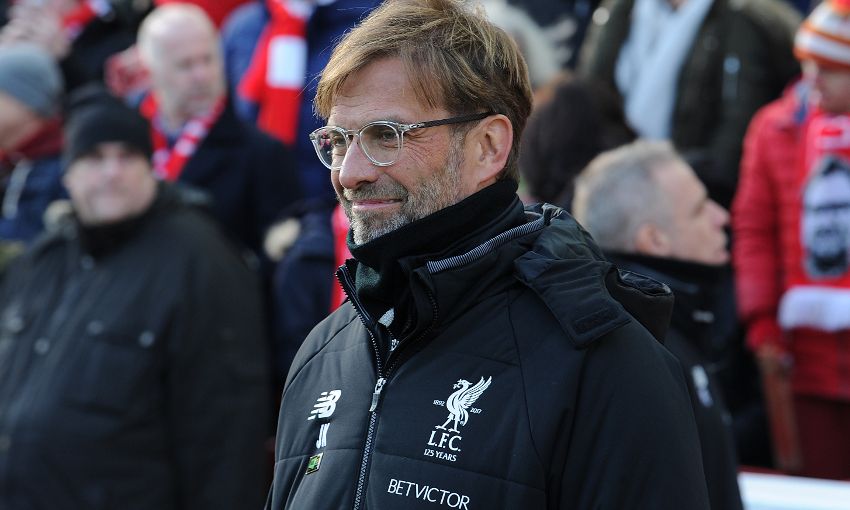 Jürgen Klopp was left thoroughly satisfied by what he described as ‘a complete performance’ after Liverpool recorded a 4-1 win over West Ham United at Anfield.

The Reds moved up to second in the table with the victory, which was started by Emre Can’s deadlock-breaking header midway through the first half.

Mohamed Salah then grabbed goal No.31 of the season so far after the break – extending his scoring streak to six consecutive games - before Roberto Firmino added a third.

Hammers substitute Michail Antonio made an immediate impact after coming off the bench to reduce the arrears, but Sadio Mane’s deft close-range finish restored the home side’s three-goal cushion to seal the win.

Afterwards, Klopp enthused about the manner of his side’s display against a West Ham team who arrived at Anfield in good form following a resurgence under the stewardship of David Moyes.

Absolutely. Look, in all the moments when we gave them a little bit of space then they were immediately there. I thought we were good in the first half but the first really big chance was for Arnautovic, a nice little genius strike and a fantastic save from Loris. But we kept on going, we played football. It was really difficult today - the wind changed direction all the time so it was difficult to judge, for both teams of course. And it’s a question of attitude, to be honest, to stay in the game then and stay focused, to do what is right to do and to improve as well and we did that.

I am really happy with the complete performance, all the individual performances were really, really good today. When we had problems in one or two moments, we had comebacks in the game and then didn’t suffer or whatever. It was just a good game and we were really difficult to play today, I would say. We scored fantastic goals and created a lot more chances and that’s against a David Moyes team - really good organised, in a good moment in the league, good quality, individual quality. So today I have nothing to criticise, to be honest.

We were only in Marbella for four days, yes it was good and we wanted to do it but we had a full week in Liverpool and we trained here much more often than we did there, even though we went there for sessions. I said it a few times, as a football manager you like it if you can work with your team. If you can prepare a team for each game, it would make football much more attractive if you gave the teams more time to prepare the things. That’s how it is, sometimes it’s only intense and both teams need to deal with intensity and fight and stuff like that, so we really could prepare, that’s the truth and I’m happy that I saw a lot of things we did on the training ground in the last 10 days.

I am happy we didn’t have to play immediately after Porto because for a human being it’s difficult to have a situation like that, winning 5-0 completely not expected and then you need to be ready again so I was happy about that. Today, to be honest, I don’t think too much about Newcastle but tomorrow morning the preparation will start, that’s how it is. It’s the next tough, tough job to do. Everybody fights for everything in this moment in the league. I said it before that usually if a few teams in the middle of the table, maybe for them it is difficult to find out what they go for now - but everybody is fighting for the league or the top six pretty much and that will be very interesting and very intense for all of us. So it was very important that we could get these three points today, they helped us a lot.

In football, it is all about doing the right thing in the right moment. I like Mo’s desire for goals. You could see that. Flexibility and being fluent depends on all the players around, it cannot only be one player who is flexible and fluent because it doesn’t help. If you see how we change positions, how Roberto immediately defends each moment for Mo when Mo is in this situation, Sadio is doing the same, it’s really important. If he didn’t do that, because you cannot score with each situation you have, then you’d cause yourself problems.

He is obviously doing well and it was not the biggest chance we had in the game from which he scored from. It was a nice goal, Sadio could have scored one or two times more, Roberto deserved a goal, Emre with the opener even when he had a few difficulties at the start. With him, you saw at the start that he had problems with the wind and then he dealt with it much better. Around the goal we conceded, he could have played the pass instead of dribbling with the ball. Mo is obviously a boy who is full of greed to score goals and that’s what you need in front of the goal.

On Liverpool going second in the table…

It’s a nice moment, but nothing more. I would say we are not second - it looks like this in the moment, but if Man United win tomorrow [against Chelsea] then we were second for a few hours and I am not sure that is too important, to be honest. To get the points is very important today. We all put pressure on each other with the results we get - you have no time to rest and if you waste one point it’s like ‘wow’. All the others are flying, so you have to fly as well.

It is really intense for all teams involved, for all the players involved. I don’t think they care too much - both teams play tomorrow against each other and I don’t think United and Chelsea think too much about us, but they knew before the matchday that we are around. We play Chelsea later in the season, we play United in two weeks. It’s very decisive and we don’t have points to waste - it’s not that we have any opportunity to.

I would have taken a 1-0 win today - ugly, dirty, West Ham four times [off the] post and Loris Karius 20 saves or whatever, I would have taken it because we need the points. Of course, now it is nice because we deserved these three points, we played well and could keep this kind of little run [going] with a few nice results. Southampton was unbelievably important for us, Porto not expected - the result was for sure not expected - and then playing today against West Ham. I think everyone who has watched a little bit more football than only Liverpool knew before the game West Ham are in a really good moment. They’ve had fantastic results against top teams. They had a difficult situation and they sorted it, they are in a good way, so to play a game like we did today is really not [to be taken] for granted. I’m really happy we could do it.