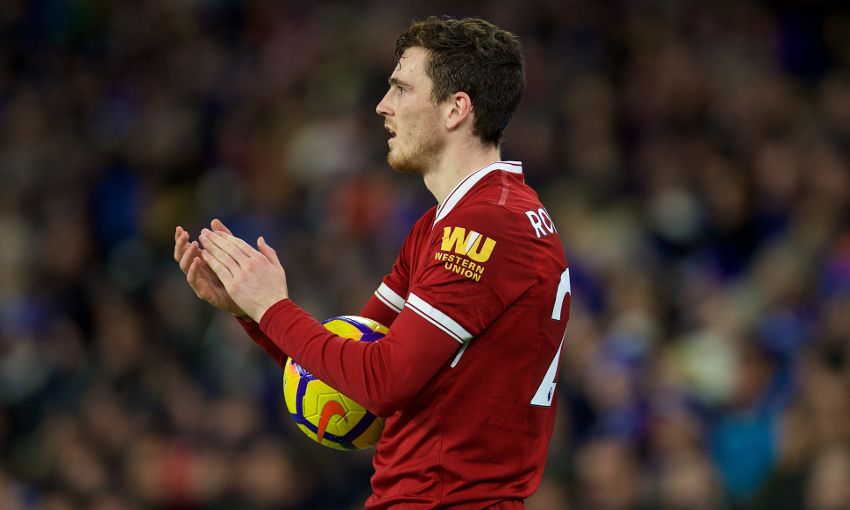 Andy Robertson is confident he has adapted to the 'sky-high standards' demanded at Liverpool – with his recent run in the team especially helpful to his settling-in process.

The Scotland international had to be patient in the fledgling months after joining the Reds from Hull City in the summer, making only three appearances before December.

But Alberto Moreno’s misfortune in suffering an ankle injury against Spartak Moscow provided the kind of opportunity Robertson was waiting for – leading to four successive appearances at left-back.

The No.26 believes the work he continued with behind the scenes, allied to help from around the squad, ensured he could use the chance to stake his claim once it arrived.

“Unfortunately, Alberto got injured. I have managed to take advantage of it and hopefully there is more to come,” Robertson explained to Liverpoolfc.com.

“It’s hard; with the quality in this squad you always need to be ready, because if you get one chance and don’t manage to take it then it could potentially be your last chance.

“All the boys who haven’t been playing are all working hard and we all have to be ready. When you get the chance you have to try to prove to the manager that you’re either ready to make the step or you can come in from the cold, as such, and perform to the levels that the boys have been performing to.”

He continued: “When I was at Hull we didn’t have the biggest of squads; especially if we got a couple of injuries that was us down to the bare bones. People were playing through pain barriers and it probably wasn’t good for our bodies but we had to do it.

“Here, we’ve got the luxury of having such a good squad – and such availability just now – that if somebody is playing with a knock it’s up to the manager whether he takes the risk or not. We can afford to maybe leave somebody behind because we’ve got the quality and strength in depth.

“That’s what happens when you come to big clubs like this – you’ve got 25 squad players that can all play in the starting XI. The manager has got that and hopefully it can continue, and the squad can get stronger.”

Robertson’s run in the team has included frustrating stalemates at home to Everton and West Bromwich Albion, games in which Liverpool have been tasked with breaking down deep-lying, highly-organised defences.

The 23-year-old understands the mentality of the opposition in such scenarios, pointing to his time with Hull City as an example, and admitted his own style of play has had to change ‘massively’.

“When I was at Hull, especially in the Premier League we predominantly defended in most games because when we came up against the big teams we had to do what teams are now doing against us,” he said.

“We had to make it hard for teams to break us down, because we knew if it was going on individual quality we would be beaten hands down.

“To be on the other side of that now is a complete change for me; you’re seeing a lot more of the ball, you’re in control of possession and you always have to be on your toes defensively, probably more so than ever, because you need to be ready for if they break once in the game on the counter-attack.

“It has probably been hard to get used to but I feel I got used to it quite quickly. There was a period of time when I wasn’t getting as many games but it was probably down to the team doing really well. We all struggled to get into the team. It was just [about] working hard and trying to adapt at training and learning from all of the boys.”

And it is not just on the pitch where the learning curve has served the Scot a challenge.

“I’ve always been quite lucky in my career that I’ve been fit and I look after myself. The squads I’ve been at, I’ve been one of the fittest,” revealed Robertson.

“But when you come here it’s a completely different standard. In training, it’s like a game – the intensity. Even the small things, when you do boxes, it is high intensity with the press, the passing and the movement.

“That’s what you get at the top clubs. It’s something you want to be a part of. It does take time to adapt; the lads’ standards are sky-high and if you drop below that they tell you, so you do adapt quite quickly.”

Help has been close at hand when Robertson has required it. 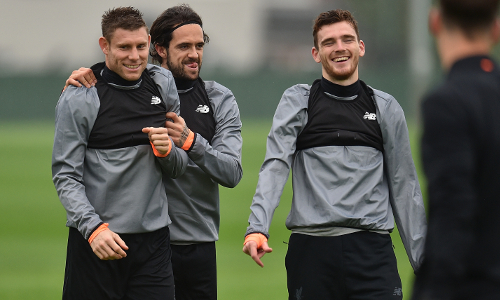 Among many others, the defender sends specific thanks to James Milner, who fulfilled the left-back role throughout the 2016-17 season after being converted from midfield by Jürgen Klopp and his coaching staff.

“He has been really good with me. He is a model pro and everyone can take a leaf out of his book. He has helped me,” said Robertson.

“He has played at big clubs his whole career; this is really the first big club I’ve played at. From that point of view, he has got a vast amount of experience. He has just talked to me: don’t let my standards drop, be patient and keep working hard.

“I’m here for a long time, I’m only three or four months into a long contract. I’ve got a lot of time to develop and become the finished article hopefully, which I’m nowhere near just now.

“He helped keep my standards high and my head up when things were tough. There have been other boys as well; Henderson, the skipper, has been brilliant with me, talking and helping.

“You need these kinds of people at times where you’re not playing. Where I’ve been playing previously, I’ve been used to playing every week. But I knew myself I would have to be patient here, I was under no illusions. Luckily, I’m quite a patient person; as long as I’m working hard and I can see progress then I’m happy. When the games come I’ve got to try to take my chance.”