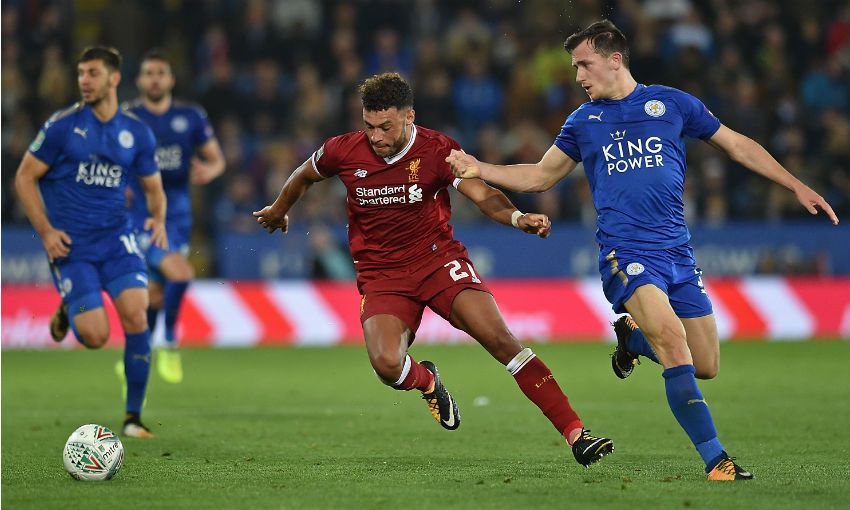 Photos: Liverpool knocked out at the King Power

Liverpool suffered elimination from the Carabao Cup at the third-round stage on Tuesday night as they were beaten 2-0 by Leicester City.

Shinji Okazaki came on as a second-half substitute to put the Foxes into the lead against the run of play after the Reds had dominated the opening period at the King Power Stadium.

The strike served to galvanise the home side – and they made certain of their place in the next round when Islam Slimani powered an unstoppable effort into the top corner as the clash ticked towards its finale, ending Jürgen Klopp’s side’s tournament hopes in the process.

Liverpool return to the same venue on Saturday tea-time for a Premier League encounter with Leicester, in which they’ll hope to end a run of four matches without a win.

Liverpool made eight changes to their starting line-up for the cup tie, with Oxlade-Chamberlain handed a full debut.

Ings was named on the bench for the first time since October 2016.

Despite the changes, Liverpool set about taking the game to their opponents from the off – and were almost ahead after just five minutes had elapsed.

Winning the ball back high up the pitch, Coutinho slid a pass into the path of Andy Robertson’s run into the area. The Scot steered it back into the centre, where Oxlade-Chamberlain arrived primed to turn it into the net; however, he was denied by an outstanding block by Ben Chilwell.

From the resulting corner, the Reds threatened again as Solanke made a nuisance of himself among a crowd of blue shirts, winning possession and drilling agonisingly across the face of goal from a tight angle.

Next, Coutinho bamboozled his way beyond three defenders and into the box, where a drive towards the near post was beaten away by Ben Hamer.

The Brazilian then had another attempt thwarted by the hosts’ goalkeeper before Solanke stabbed over the bar on the stretch when attempting to reach Robertson’s latest centre.

The chances were being created frequently – even into first-half stoppage-time, when a Coutinho prod presented Solanke with a chance, but he scooped over under pressure from Hamer.

Indeed, as the teams headed back to the dressing rooms, Liverpool’s attempts tally at goal stood at 13 to Leicester’s two.

Ben Woodburn replaced Coutinho at the break and while the Reds maintained their first-half pressure in the early exchanges, the Foxes fashioned their best chance of the evening so far nine minutes after the restart when Demarai Gray’s low drive across goal had Ward momentarily worried.

And as the contest progressed, Craig Shakespeare’s side visibly grew into it – and duly took the lead on 64 minutes.

A cleared corner was hoisted back into the danger zone, where Wes Morgan headed across into the path of Vicente Iborra. He nudged it back towards Okazaki, who diverted the ball low into the bottom corner.

Liverpool’s response saw Woodburn skim the roof of the net with a curler from the left-hand side of the box, while Ings was introduced for Wijnaldum.

The striker was close to an equaliser when he attempted to glance Woodburn’s cross around Hamer, but he couldn’t make the necessary connection.

However, Leicester’s influence on the game had continued to grow since making the breakthrough – and with 12 minutes left to play, they helped themselves to a second when Slimani cut in from the right and arrowed a powerful effort into the top corner, ending the Reds’ hopes of progress in the competition.