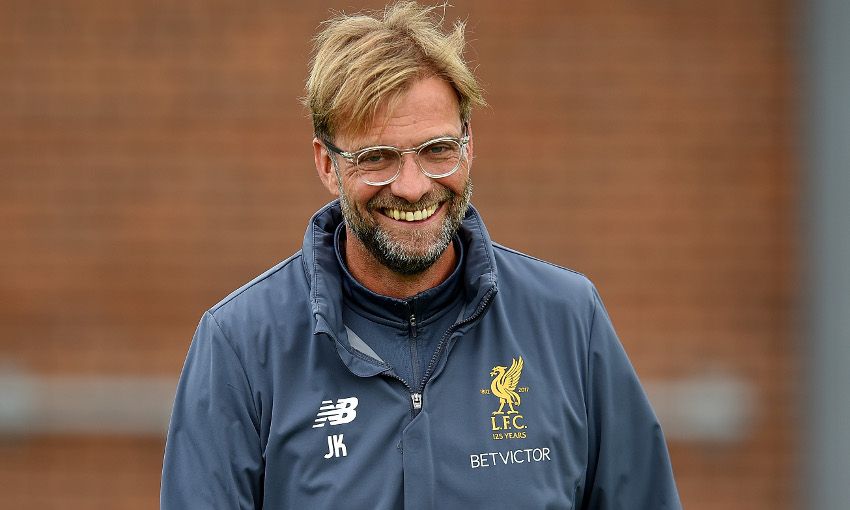 View from the opposition: 'It'll be a different-looking Leicester'

Jürgen Klopp was quizzed on Alex Oxlade-Chamberlain's prospective development, his squad's capability to deal with multiple competitions and the pressure of playing at Anfield in the embargoed section of his press conference on Monday.

Read on for a full transcript of the boss' thoughts ahead of the Reds' trip to face Leicester City in the Carabao Cup.

Oxlade-Chamberlain said he came here to develop as a player, how do you plan to help him achieve that?

"A new start is, very often, kind of a relief. You are in a situation in your old club - I don’t say it now for Alex especially but in general it's like this - you are in a specific position and you accept it at some point and then it's difficult to make the next step. I thought it made complete sense for Alex to change club, especially to come here. So far, I can see that he has settled in perfectly. He knew at least all of the England players and a few others and he's a really nice lad so it is easy for him to settle in the team. He takes the situation like it is. He knows he played all the games for Arsenal from the beginning and now he's coming here and sitting on the bench - it looks like it was not the best decision. But it's about the long-term and we already can use him, that's good, but we want to prepare him also, that's all. It's all good from this side at the moment."

Can your squad deal with the League Cup as well as other commitments?

"From today's perspective, yes - we will see how it is in January. What is my alternative? To go to Leicester with a white flag? Or say, 'If you want to go to the semi-finals in January, then do it because we don't want to be part of it'? We had a few line-ups and everything was good in the last few years when we went through this competition in different games and then, at one point, we didn't have the opportunity to line up the strongest side and [people said I did not] respect the cup competitions. That's obviously not so nice. In this moment, we have the players for it and I think the squad is wide enough to play in different competitions and to come as far as possible and that's the plan at the moment. No player who is involved tomorrow is involved because I hope we go out of this competition. We are really there to win the game. It will be difficult enough but this competition is good. The final was good when we played there, the semi-final last year with Southampton [came at] the wrongest possible moment but we couldn't change that. We will see how it is in January but, in this moment, I feel quite comfortable when I think about different opportunities to use the players and to bring the players in different games."

What did you say to Oxlade-Chamberlain about how he could improve?

"I'm not sure if it's something for the public when I speak to a player. We play different to Arsenal, that's clear. It doesn't mean better or worse, it just means different. At least, being involved in different football is already development because it helps you to react in different moments, so that's doing not always the same [thing]. Arsenal changed a lot since Oxlade is there, I'm sure they didn't play always with three at the back and wing-backs and stuff like this. I played against Arsenal when Alex was in centre-mid, I played against Alex when he was on the wing, I played against Arsenal when he was wing-back. He played different positions and that is all highest quality; if you can play in the Premier League on different positions it says a lot about you. It is a judgement from outside that you don't develop but playing different positions is already development. Probably, when Alex was 18 or 19 people thought he could be 'the man', like a lot of people think a lot of times pretty early. But, as I always say, you immediately put a rucksack on their back and that makes development not easy. So, hide them as long as it makes sense and send them out as soon as possible. That's the plan. But he is now the perfect age and still is able to make big steps. I thought he played in the last game like a Liverpool player - highest intensity, all good, was not fixed in a position, flexible, half-left, half-right, in the box. I saw already a lot of things and, at the end, he didn't score a goal so probably a lot of people will say that's not a proper Liverpool player. But I'm really happy to have him here and I hope he is also happy to be here."

The next four fixtures are away from home - what impact will that have on your side's form?

"I love playing at home, we all do. So, no, it's not cool that we now play four away games in a row. I think everybody can feel it, can hear it, that's how it is. It's [up to] us to deliver, we have to deliver, we know that. If we win the game on Saturday three or four nil, it would have been outstanding, but we went 1-0 down. But there was a big [reaction], especially the Kop was there with 'We Are Liverpool'. We had the similar situation against Sevilla - [conceding an] early goal is not cool but the reaction from the stand was outstanding. We equalised in both games, one game we took the lead but I couldn't feel a lot of frustration after the first Champions League game around me, [I'm] not sure how it was but I didn't feel it. Burnley, people were not too happy, that's normal but we cannot do more than give our best. I'm sure this team can make the people happy more often than we did it so far. If you want, you can enjoy watching this football team, that's how it is in all the games so far. Yes, we have to improve results-wise, but I think if the video ref would be involved in England too we would have had for sure two points more and maybe four. That's how it is. Just my example, my former club Dortmund played yesterday, and they got a goal from the video ref that was not even a goal... funny! That's the next level, you don't have to score and we get it with the video ref! We have to perform and we have to deliver, we know, and we put a lot of pressure on ourselves. It's all good, we love playing at Anfield, no doubt about it."