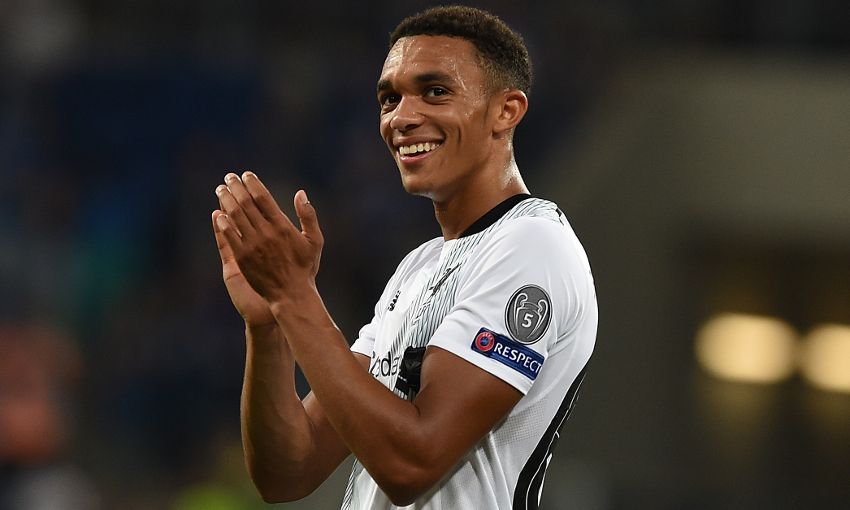 Trent Alexander-Arnold may have hit the headlines this week with his stunning Hoffenheim free-kick, but Jordan Henderson insists nobody is in any doubt the 18-year-old will keep his feet firmly on the ground.

The full-back turned in an excellent display in the first leg of the Champions League play-off in Germany, capping it off with his maiden goal for the Reds to break the deadlock.

Much of the post-match attention centred on Alexander-Arnold’s strike and overall performance, but Henderson is confident such plaudits won’t go to his head.

Writing in ‘This is Anfield’, the captain said: “With some 18-year-olds you might be worried that a lot of public focus and attention on a great moment, such as scoring a goal in an important European game, would go to their head? You might want to play the moment down and remind them constantly not to get carried away? You might, as teammates, be worried about too much hype and pressure on someone who is still so young and learning?

“I can tell you straightaway with Trent Alexander-Arnold we have no such worries.

“He needs no reminding to keep his feet on the ground. It's why he is the way he is, and it's why his goal against Hoffenheim on Tuesday night was something to enjoy.

“One of Trent's biggest qualities is how grounded he is. That he doesn't think for one second that he's 'cracked it', that he's 'arrived'. He has that perfect mix of confidence, humility and hunger. The confidence to be in an environment like Liverpool, with all the scrutiny that comes with it and not crumble. The humility to know that he's not the finished article and that others around him have experienced more and can help him. And the hunger to want to keep learning and achieve as much as possible.”

After the game, Jürgen Klopp revealed Alexander-Arnold can often be found practising his set-piece routines with Ben Woodburn and Ovie Ejaria after training at Melwood.

Henderson confirmed: “I must have seen Trent – and Ben and Ovie – take literally hundreds and hundreds of free-kicks at Melwood. Long after the session has finished. Long after the gaffer has called time and allowed us to go in, if we want to.

“In fact it is one of the most common appearances at Melwood: Trent, Ben, Ovie and the other young lads practising free-kicks and other skills long after the scheduled session. It's no exaggeration to say the gaffer and the coaches sometimes have to shout at them to come in, or they'd be out there all night.

“That's brilliant, though, and it's why these young lads have such a good chance to make sure moments like Trent's free kick in Hoffenheim aren't just 'one-offs'. It's on the more experienced lads to keep helping them and keep them focused and grounded.”

Pick up your copy of 'This is Anfield' featuring Mohamed Salah on the cover at the stadium today, or subscribe online by clicking here.