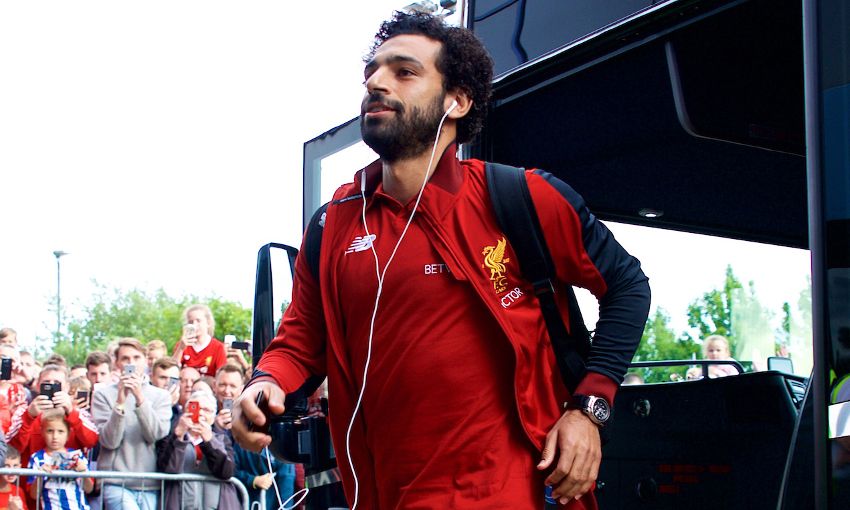 James Milner is yet to play alongside Mohamed Salah for Liverpool, but the vice-captain feels he has seen enough already in training to suggest the summer signing is going to be an important asset for the side.

The Egypt international marked his first appearance for the Reds with a goal in Friday evening’s 1-1 draw with Wigan Athletic in a pre-season friendly at the DW Stadium.

As well as finding the target, Salah impressed during his 45-minute bow for the club with a lively display across the front line – and Milner feels he will prove to be a fine addition to the ranks.

He told Liverpoolfc.com: “[He was] very good. He’s a top player, he’s shown that in the little time that he’s been here and I’ve seen it playing up close also.

“He’s a great addition to the squad and it was nice for him to get off the mark as well.”

Salah was deployed alongside Philippe Coutinho and Roberto Firmino in a three-pronged attack at Wigan, supported by Adam Lallana and Ben Woodburn.

The front triumvirate linked up well throughout the first half, resulting in Coutinho supplying the initial pass to allow Firmino to unselfishly square for Salah to tap in his goal.

“They are all top players and it’s easier when you are as good as they are,” said Milner. “They are all lively with great imagination, movement and great touches and they can all see a pass and are all unselfish as well, so you need that and that’s a big part of our game obviously unselfish team play. With and without the ball those three players can do that.”

Although Salah’s effort cancelled out Alex Gilbey’s opener, Liverpool were ultimately forced to settle for a 1-1 draw at Wigan.

Nevertheless, Milner is satisfied with what the Reds took from a contest played in heavy second-half rain.

“It’s another 45 minutes in the legs and another match situation, getting used to the movements, patterns and reactions and all those things which are obviously different to training and you can only get in a game,” he said.

“That’s a positive. The pitch was tricky but it’s the same for both teams. It wasn’t ideal for passing the ball around but we dealt with it and ultimately it’s pre-season and the result doesn’t matter too much. It’s always nice to win but it was a good workout for us.”

Liverpool will now depart for Hong Kong on Sunday, where they will face Crystal Palace and one of either Leicester City or West Bromwich Albion in the Premier League Asia Trophy.

After that, the Reds heads to German to tackle Hertha Berlin before Bayern Munich and then Napoli or Atletico Madrid in the Audi Cup.

And Milner feels the schedule will benefit Jürgen Klopp’s men as they gear up for the start of the 2017-18 campaign.

“Ultimately I think all of pre-season until the last couple of games it’s all about the fitness really; getting the minutes and the movements and sharpening them up,” he explained.

“But you are always developing those understandings and the movements you want to put into the season, working on different systems and being comfortable and making everything a bit more natural.

“It’s just getting that sharpness again. You don’t forget what you are doing but it’s doing it with fluidity and being on the same page and working together.

“It will come, there’s a lot of pre-season games to come and a lot of travelling. We have done a lot of training already since we’ve been back and that’s good. It has been a hard nine days so far or whatever it is we’ve been back but that’s what you need in pre-season. We’ll have a rest day on Saturday before we go again.”