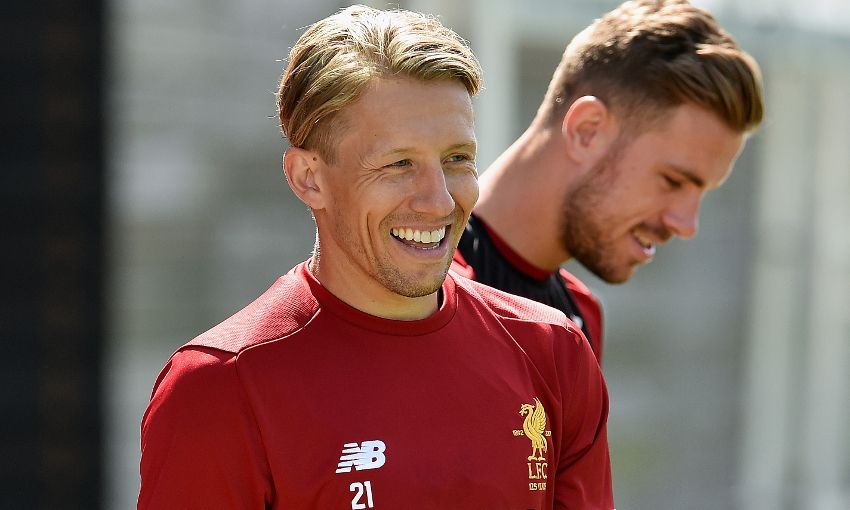 The intensity of pre-season under Jürgen Klopp tests even Lucas Leiva's wealth of experience of the annual preparations at Melwood.

“It just gets harder and harder!” the long-serving Brazilian said with a smile earlier this week as he discussed the return to training with Liverpoolfc.com.

Lucas is back at the West Derby base for the 11th successive summer having reached the rare milestone of a decade’s service to the Reds at the end of 2016-17.

This pre-season is only the second under Klopp, however, and the No.21 admits the intense nature of the work overseen by the manager and his backroom staff challenges the players – but ultimately rewards them come August.

“They try to test everything – power, balance, stamina, everything. It’s good,” he explained.

“We had a plan to do during the break; it wasn’t too hard, just to make sure we got here in good shape to start pre-season because that’s what pre-season is about: fitness and getting better.

“It builds up. It’s very intense, like it should be. But when you have experience you know how to manage it.

“I’ve missed the ball a lot. I haven’t played football for my whole holiday. So it will be good to start with the ball and get together again and get the movement going. Hopefully by August we’ll all be very, very fit.”

Liverpool set up the prospect of returning to the Champions League in the upcoming season with their fourth-place finish in the Premier League last term.

To complete qualification for Europe’s elite club tournament the Reds will have to successfully navigate a two-legged play-off shortly after their campaign begins at Watford.

Lucas insists that showdown is currently at the back of the players’ minds as they concentrate solely on raising their fitness levels in the weeks ahead.

But the 30-year-old is confident that Klopp’s men can use the momentum from the final games of the previous season to make a strong start to the new one.

He said: “We finished the season on a high. Of course, it’s a new season. We have to do the same and even better. It’s a new challenge.

“The second pre-season, you know what it’s like and how the manager wants us to work. On this side, it’s positive. Hopefully we’ll start in a good way, like we finished.”

Don't miss a moment of pre-season with LFCTV and LFCTV GO - click here for information on watching every game.