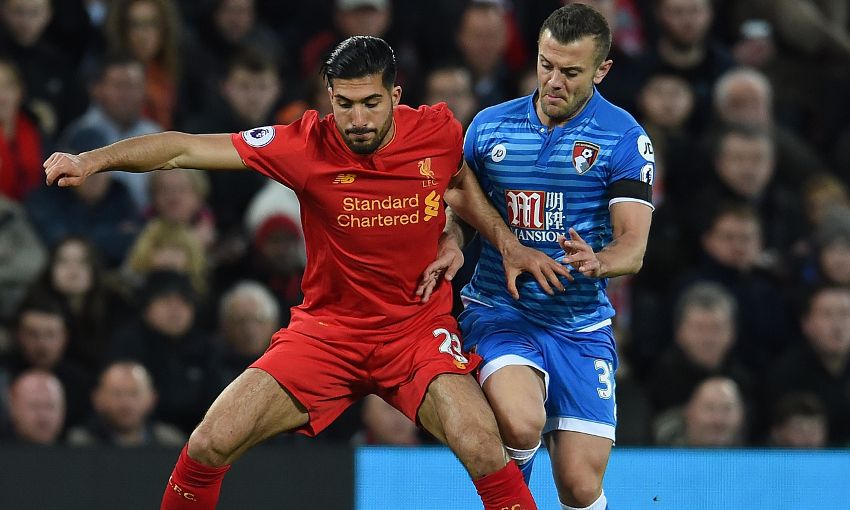 Liverpool were left frustrated as a late goal denied them victory in a 2-2 draw with AFC Bournemouth at Anfield on Wednesday night.

But Philippe Coutinho drew the Reds level just prior to the break when he swept home from Roberto Firmino’s through ball, before Divock Origi headed them in front on 59 minutes.

However, there was to be late disappointment for Jürgen Klopp’s side as Josh King scrambled home an equaliser in the final moments to force a share of the spoils.

Liverpool made two changes to the side deployed against Everton on Saturday, with Origi and Ragnar Klavan coming in to replace the injured Sadio Mane and Joel Matip.

Meanwhile, Daniel Sturridge was back in the matchday squad and named on the bench.

Before the game got under way, Anfield paid tribute to the memory of the 96 children, women and men who lost their lives at Hillsborough in the final Liverpool home game before the 28th anniversary of the 1989 disaster.

The stadium observed a minute’s applause in recognition of the families, survivors and all those who supported the campaign for justice, while the Kop held a mosaic aloft in honour of the 96.

On the pitch, Liverpool made a fast-paced start to the evening and after Firmino had an effort deflected narrowly over the bar, Dejan Lovren was millimetres away from turning in Lucas Leiva’s flick-on at a corner.

However, the Reds found themselves a goal behind with seven minutes played when Wijnaldum’s attempted backpass was seized upon by Afobe, who slipped the ball beyond the advancing Mignolet.

The hosts began to exert more pressure on their opponent’s goal in riposte – and Origi was presented with an opportunity to draw them level, but could not adjust his feet quickly enough when King’s inadvertent flick across the box at a corner fell in the direction of the striker unmarked at the back post.

But at the other end, Marc Pugh was inches away from adding a second goal for Bournemouth when he drilled a half-volley just wide of the far post after the ball dropped for him at a set-piece.

Next, Wijnaldum stung the palms of Artur Boruc as he snapped a strike towards goal from the edge of the area, while King arrowed just over Mignolet’s bar at the conclusion of a Cherries counter.

Coutinho then clipped the roof of the net with a free-kick and a hit from range from Firmino was blocked by Boruc.

However, Liverpool finally drew level five minutes before half-time with a goal of simplicity.

Mignolet’s long kick forward was flicked into the path of Firmino by Origi. The Brazilian controlled on his chest, took a touch and then slid a pass through for Coutinho’s run, who steered beyond Boruc with aplomb.

The Reds almost made the ideal start to the second period, but Nathaniel Clyne – along with a sizeable majority of those inside Anfield – was left clutching his head in his hands after his blast from the corner of the area cannoned against the underside of the crossbar and away from goal due to a fingertip touch from Boruc.

Nevertheless, the home side had really begun to turn the screw – and the pressure finally told just before the hour mark when they went in front.

Coutinho’s first-time pass forward found the dart of Wijnaldum into the area, who did brilliantly to dance into space before hoisting the ball into the six-yard box, where Origi bulleted a header home from point-blank range.

Liverpool withdrew Coutinho from the action soon after, seemingly due to a knock, with Matip his replacement.

And as the game entered its final straight, the points appeared to be remaining on Merseyside – until King managed to hook the ball into the net after a long throw into the area from Bournemouth resulted in a penalty-box scramble.

Still, Liverpool had chances to win it as Origi went agonisingly close to turning a Matip header over the line, while Klavan nodded straight at Boruc in stoppage-time.