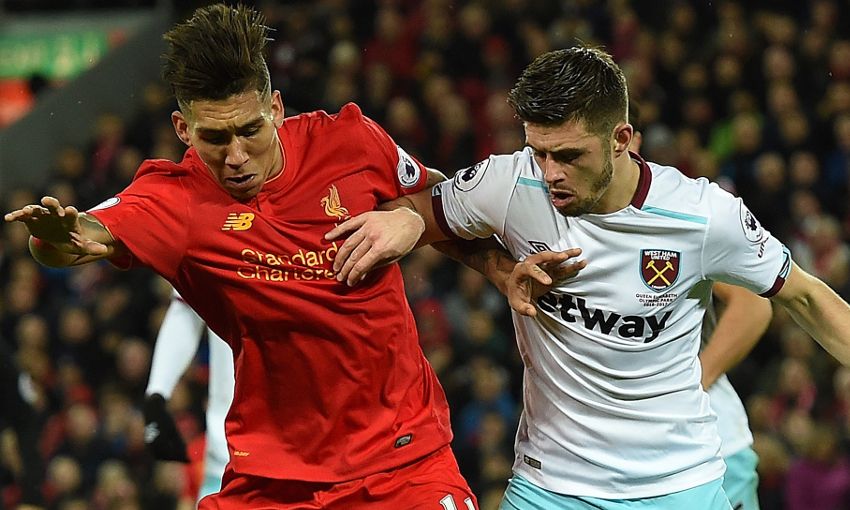 Liverpool came from behind but had to settle for a point as they were held to a 2-2 draw by West Ham United at Anfield on Sunday afternoon.

Adam Lallana swept the Reds into a fifth-minute lead to cap a well-worked move, but Dimitri Payet’s long-range free-kick levelled up the scoreline shortly after.

And the Hammers went into half-time holding a 2-1 lead as Michail Antonio capitalised on hesitation within the Reds defence to prod beyond Loris Karius.

Liverpool equalised almost immediately after the break, with Divock Origi on hand to tap in after Darren Randolph had spilled Sadio Mane’s cross.

And though the home team applied heavy pressure to the visitors’ goal as they went in search of a winner, but they were unable to muster a third as West Ham claimed a share of the points.

The teamsheet confirmed two changes for Liverpool from the side deployed against Bournemouth last time out, with Lallana and Joel Matip coming into the XI in place of Emre Can and Lucas Leiva.

Can was forced to sit out the contest altogether with a knee injury that isn’t thought to be serious.

Eager to put the frustrations of last weekend’s 4-3 defeat at the Vitality Stadium behind them, Liverpool began strongly – and duly took the lead with only five minutes on the scoreboard.

A flowing move resulted in Mane combining with Origi down the left before lifting the ball into the middle of the area, where Lallana took a touch to control before sweeping across goal and into the far corner in an instant.

West Ham threatened to muster an instant riposte and Karius was required to tip a blast from Antonio around the post after the visiting forward had found space on the corner of the box.

Liverpool continued to look a danger on the break – but they found themselves back on level terms on 27 minutes when Payet took aim from a free-kick 25 yards out and found the bottom corner.

Nevertheless, the hosts almost restored the advantage moments after when a move involving Mane, Lallana and Jordan Henderson opened up a shooting chance for the Reds captain, but he was thwarted by Mark Noble’s sliding block.

But, as half-time approached, West Ham went ahead as a hopeful ball forward flicked off the head of Henderson, was misjudged by Matip and Antonio stole in to divert beyond the onrushing Karius.

The home pressed and probed in an attempt to restore parity before the break, with Firmino nodding wide from a Georginio Wijnaldum centre and Matip heading against the crossbar from a corner, but Slaven Bilic’s team held on to their advantage.

Liverpool made a change during the interval, with Ragnar Klavan replacing Dejan Lovren – and they were level within three minutes of the re-start.

Mane’s fierce cross from the left was spilled by Randolph, enabling Origi to turn the loose ball over the line from yards out.

Now operating with renewed vigour, Wijnaldum skimmed an effort inches beyond the post and Origi had another effort blocked by Winston Reid as they went in search of a third.

On the hour, the Dutchman skipped into the area from James Milner’s and arched just off target as Liverpool continued to press.

Then, on 70 minutes, Henderson’s 30-yard curler was palmed over the bar by Randolph when it seemed destined to find the top corner.

With time ticking away, the Reds carved open West Ham once again as Mane and Lallana combined to tee up Nathaniel Clyne, who smacked an effort over the bar from just inside the area.

But despite the pressure, there was to be no dramatic winner as West Ham held out to clinch a point.