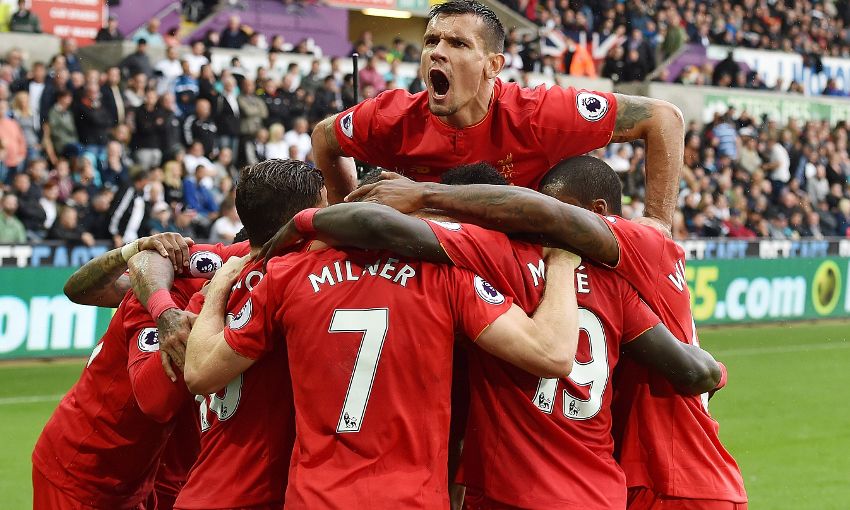 Liverpool secured a fourth consecutive win in the Premier League by coming from a goal down to beat Swansea City 2-1 at the Liberty Stadium on Saturday afternoon.

Leroy Fer opened the scoring in the eighth minute with a tap-in to punctuate a dominant beginning to the game for the home side.

But the Reds steadily turned the screw as the contest progressed and Roberto Firmino nodded in a leveller early in the second half.

The Brazilian then won a penalty with seven minutes remaining and James Milner maintained his flawless record from 12 yards to hand his team another victory.

Jürgen Klopp made only one change to his starting XI in Wales, with Dejan Lovren back in the side after missing the Anfield victory over Hull City. Ragnar Klavan dropped to the bench.

Swansea should have taken the lead in the fifth minute, when Wayne Routledge delivered a cross from the right that found Borja in between the two centre-backs – but the Spanish striker headed the chance over.

Fer was far more clinical, however.

A deep corner from the left side reached Borja at the far post and after he redirected it back across goal – via a flick from Mike van der Hoorn – the Swans midfielder was left with a simple tap-in from mere yards out.

Klopp had warned ahead of the game that the Welsh club’s tally of points so far this season was a false representation of their quality – and Liverpool saw evidence of that throughout the opening 20 minutes.

Jack Cork might have doubled the lead from Gylfi Sigurdsson’s curving dink into the area, too, but his connection on the stretch lacked power and was scooped up safely by Loris Karius.

The Reds were then forced into a reshuffle as Adam Lallana pulled up with an injury – Daniel Sturridge was sent on in his stead and Philippe Coutinho moved into a deeper role.

Borja squandered another gilt-edged opportunity with his head in the 26th minute, glancing narrowly wide of the left post when found by a menacing free-kick to the six-yard box.

Klopp’s men slowly began to improve and only an excellently-timed Jordi Amat tackle denied Sadio Mane a one-on-one, before Firmino was crowded out as he tried to turn and strike inside the area.

A brighter start to the second half by Liverpool saw Mane and Sturridge combine to present the former with a chance, but his low clip at goal under pressure was blocked by Lukasz Fabianski.

The equaliser did come on 54 minutes, though, and it changed the flow of the match.

When Coutinho fired a free-kick into the wall, the loose ball was immediately spun into the Swansea box by Jordan Henderson and Firmino was waiting to calmly flick a header into the left corner.

The travelling Kopites at that end of the ground were suddenly in full voice and they almost had cause to celebrate a second for their team moments later.

Coutinho fed a pass into Georginio Wijnaldum 20 yards out and moved onto the instant lay-up from the Dutchman, side-footing a curler inches wide of his target.

Now Klopp’s charges were completely in control and pushing hard for a winner that perhaps should have come from Mane in the 69th minute.

Supporting along the left flank, Milner robbed Van der Hoorn at the corner of the area and squared for the Senegalese, whose effort was blocked by the recovering Kyle Naughton.

But the Reds were not to be denied, striking again on 83 minutes.

When another attack saw substitute Modou Barrow lump a clearance high into the air, Firmino was pushed over by Angel Rangel and the referee pointed to the spot.

Up stepped Milner to dink straight down the middle – his seventh successful spot-kick in a row for Liverpool – and ensure Klopp’s men can head into the international break with their winning run intact.

Watch Liverpool in style at Anfield this season with some fantastic hospitality packages available. Click here to find out more.