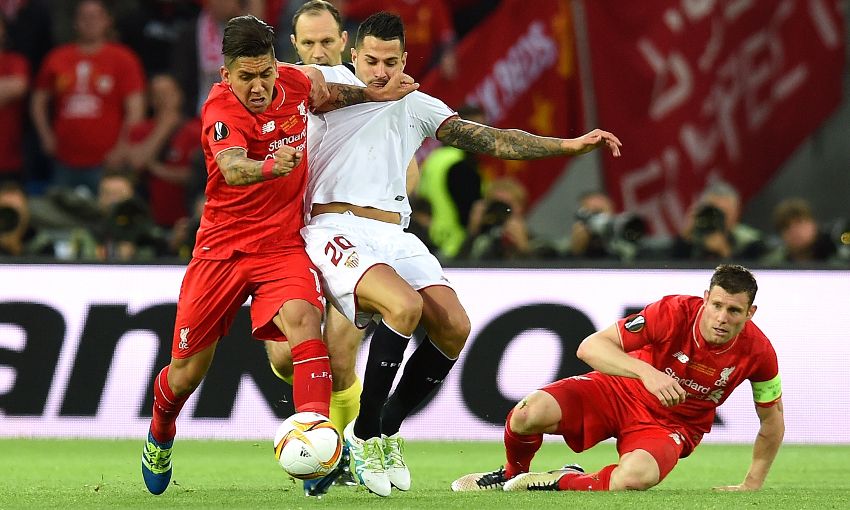 Liverpool suffered heartbreak in the Europa League final on Wednesday night as they were beaten 3-1 by Sevilla in Basel.

The Reds took the lead during an impressive first-half showing courtesy of an outstanding Daniel Sturridge strike.

However, the Spaniards fought back after the break, scoring three times at St. Jakob-Park to seal victory and secure the trophy for the third successive season.

Liverpool elected to select the same team that had dispatched Villarreal in the second leg of the semi-final at Anfield. That meant starts for the likes of Philippe Coutinho, Roberto Firmino and Sturridge as Jürgen Klopp made 11 changes to the side that started against West Bromwich Albion on Sunday.

Elsewhere, Jordan Henderson and Divock Origi were named on the bench after returning to fitness.

After the formalities of the contest’s opening ceremony had concluded, the game got underway with the Liverpool support inside St. Jakob-Park making all the noise; however, it was Sevilla who made the more imposing start to proceedings.

That said, it was Emre Can who had the game’s first attempt on goal, striking first time from 20 yards and forcing David Soria into a flying save.

Then, two minutes later, a Sturridge header back across goal from a deep Nathaniel Clyne centre evaded the goalkeeper, but was hooked off the line by Daniel Carrico.

Sturridge was the recipient of the next opportunity fashioned by Liverpool, too. This time, Adam Lallana’s reverse pass allowed the striker to find space inside the area, but from a tight angle his effort was smothered by the sprawling Soria.

In what was developing into a finely-poised encounter, Sevilla’s first real chance didn’t arrive until just after the half-hour when Kevin Gameiro’s ambitious overhead kick in a crowded box gave cause for momentary worry before bouncing wide.

But finally, the moment Liverpool had been threatening arrived on 35 minutes as Sturridge opened the scoring with a moment of sublime class.

Collecting Coutinho’s pass just inside the area following a counter-attack, the forward intelligently used Mariano Ferreira’s body to shield the vision of Soria before arching an effort into the corner with the outside of his left boot.

The travelling support erupted in delight – and they thought it had got even better soon after when Lovren sent a header crashing into the back of the net from 12 yards at a corner, but a flag was raised for offside.

The Reds were in the ascendancy, though, and Sturridge was millimetres away from turning another Clyne cross over the line from yards out before the whistle sounded for the interval.

Liverpool’s half-time joy lasted just 17 seconds after the re-start when Sevilla drew level. Ferreira scampered down the right, evaded Alberto Moreno and laid the ball off for Gameiro in the centre to tap in an equaliser.

The French forward found himself bearing down on Simon Mignolet again just moments later, but he was foiled by a sensational last-ditch challenge from Kolo Toure as he went to pull the trigger.

Gameiro was then left clutching his head in his hands when Steven N’Zonzi’s flick from a long throw-in found him completely unmarked inside the six-yard box; however, his swipe at a volley was deflected over the crossbar by the legs of Mignolet.

Nevertheless, Liverpool’s fortune evaded them on 63 minutes as the La Liga side went in front as Coke met Vitolo’s attempt to skip beyond two Reds defenders and clipped first-time into the bottom corner from the edge of the area.

Klopp’s response saw Origi introduced for Firmino with 22 minutes left on the clock, but Sevilla extended their lead soon after when Coke capitalised on some good fortune to smash beyond Mignolet from close range.

And despite their efforts, on this occasion there was to be no Liverpool fightback as the trophy returned to Spain.