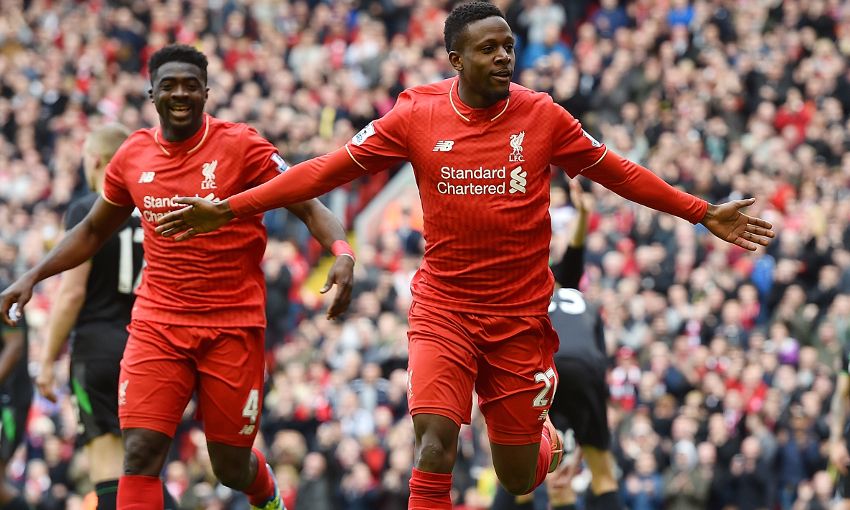 Recap: Liverpool 4-1 Stoke - how it happened at Anfield

Divock Origi netted twice as Liverpool leapfrogged Stoke City in the Barclays Premier League with a comfortable 4-1 win at Anfield on Sunday afternoon.

The 20-year-old bagged a brace after emerging from the bench at half-time, adding to Alberto Moreno and Daniel Sturridge's first-half strikes for the Reds.

The hosts had been pulled back to 1-1 by Bojan's headed goal early in the opening 45 minutes, but a second-half performance full of endeavour saw them eventually cruise to a deserved three points.

Victory over Mark Hughes' men also serves as the perfect preparation for the mouthwatering visit of Borussia Dortmund to Anfield in the Europa League on Thursday.

With the Potters' visit coming between two physically demanding meetings with BVB, Jürgen Klopp elected to shuffle his pack in order to help his squad maintain the intensity that has characterised their recent performances.

As a result, Kevin Stewart and Sheyi Ojo were handed their full Premier League debuts as part of seven changes to the hosts' team from their 1-1 draw at the Westfalenstadion on Thursday.

Both sides threatened in an open start to the game at Anfield, with dangerous crosses to Sturridge and Peter Crouch cleared with an air of desperation by the respective defences.

But it was a moment of quick thinking that proved crucial to Moreno opening the scoring, as James Milner's quick free-kick provided the Spaniard with the space to blast home from the edge of the box.

The Reds No.18 then almost added to his rare strike with a burst in behind that saw him meet Kolo Toure's through-ball but, unfortunately, he was unable to get a shot away in time.

The visitors rallied in the aftermath of that spell of pressure, pushing forward in numbers in an attempt to quickly restore parity.

And their efforts were rewarded when Martin Skrtel's foul on Crouch outside the area was punished, with Xherdan Shaqiri's whipped free-kick nodded in by Bojan at the Kop end.

The visiting supporters in Anfield were celebrating again just six minutes later as Crouch netted another header from Erik Pieters' brilliant whipped ball from deep on the left.

Thankfully for the hosts, an offside flag prevented the goal from counting.

That let-off provided Klopp's men with all the encouragement they needed and, after Sturridge sent a sighter just wide of the post from distance, he grabbed his customary goal.

Ojo escaped Shaqiri on the left by feeding the ball round him and running the other side before dinking in a delightful cross for his colleague to nod home.

A Ryan Shawcross header that flew just wide and a Giannelli Imbula effort that required safe hands from Simon Mignolet reminded Liverpool they were in a game before the break.

But they saw off the danger to take a deserved lead into half-time - and wasted little time extending it after the restart.

Origi, who replaced Ojo at half-time for the hosts, had little problem finding space five minutes after his introduction, and met Milner's pinpoint left-footed cross to nod in.

The Belgian should in fact have had another on the hour mark after Moreno collected an outrageous Sturridge flick and picked out his teammate's head with the cross, but the effort was sent over and into the Kop.

However, that miss proved inconsequential, as the young striker atoned in the most outrageous fashion moments later.

Picking up the ball on the left wing, it looked like Origi had little on but, a shift of his body and a move inside later, he had found room to send a delightful curler into the far corner.

The game as a contest was effectively ended by that strike, but the return of Lucas Leiva from injury gave the crowd reason to cheer in the final 20 minutes.

And, as the hosts saw the final moments out with little difficulty, the thoughts of supporters no doubt turned to their next Anfield visit on Thursday, when Borussia Dortmund come to town.

Watch the Merseyside derby in style on April 20 with some fantastic hospitality packages available. Click here to find out more.