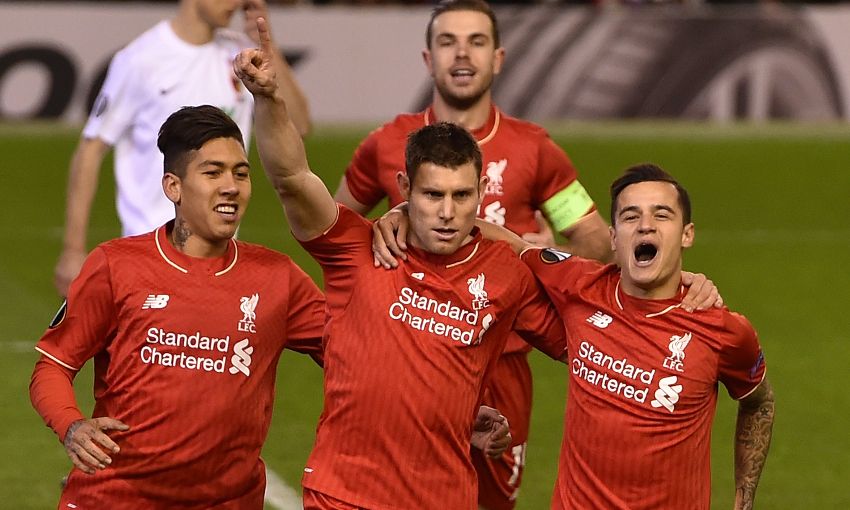 Liverpool progressed to the last 16 of the Europa League by beating Augsburg 1-0 in the second leg of their tie at Anfield on Thursday night.

James Milner’s fifth-minute penalty edged the Reds ahead on aggregate following the goalless draw in Germany a week ago and proved enough to ensure inclusion in Friday’s draw for the next round.

Augsburg actually created the first chance of the evening inside the opening minute, when Caiuby surged beyond the backline in the left channel only to wildly drive his effort over the crossbar and into the Kop.

And the Bundesliga side were made to pay almost immediately.

Just as a Reds delivery into their area appeared to be petering out at the back post, referee Clement Turpin awarded a penalty to the hosts after observing a handball by Dominik Kohr.

Milner took responsibility from 12 yards and calmly found the bottom right corner, sending the low spot-kick just past the reach of Marwin Hitz to end the stalemate in the tie.

It was exactly the kind of start Liverpool hoped for, though the visitors recovered from the setback and prevented Klopp’s men from building on the early breakthrough.

But the benefits of having Philippe Coutinho, Roberto Firmino and Daniel Sturridge together in attack for the third consecutive match began to show as they combined impressively.

One flowing move involved an exchange between Coutinho and Sturridge that began outside the area and finished inside it, with the former’s punt at goal blocked and then scooped up by Hitz.

Another neat passing approach at the right corner of the Augsburg box allowed Firmino to tee up Nathaniel Clyne for a shot on the diagonal towards the opposite corner – but a deflection took it wide.

The German side remained a threat, though, and Caiuby perhaps should have levelled once he had latched onto Lucas Leiva’s short pass back to goal but, having rounded Simon Mignolet, he missed the target from a narrow angle.

Hitz was called into action again six minutes before the break and kept out a Sturridge curler that was heading inside the near post, meaning they headed back to the dressing rooms with the score still 1-0.

The England international was inches away from providing a cushion once the second half got underway. High pressure on the left flank forged the opportunity but his right-foot finish bounced wide.

Almost all of the pressure was now in the direction of the Augsburg goal and only a superb challenge by Christoph Janker inside the area stopped Firmino from redirecting Clyne’s set-up into the net.

Into the final half-hour, Coutinho shaped up for a trademark curler 20 yards out on the left but failed to find the spot he was aiming for, before Klopp swapped Sturridge for Divock Origi at the centre of the forward line.

The Belgian was close to forcing a second for Liverpool as his cross in search of a teammate in the box looped off an opposition defender – Hitz reacted quickly with the ball arching towards him to clear and deny Firmino a tap-in.

And the visiting goalkeeper was at it again on 77 minutes, blocking Jordan Henderson’s bobbling effort on the goalline after Firmino’s sheer persistence troubled the Augsburg defence.

But 1-0 ultimately proved enough for Klopp and his players, who will discover their next opponents in this competition on Friday before aiming to lift the Capital One Cup on Sunday.