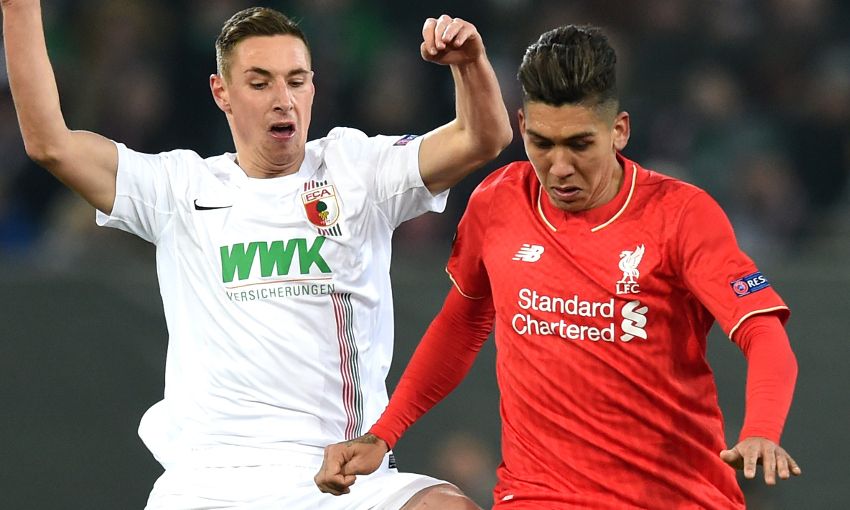 Liverpool must beat FC Augsburg at Anfield to reach the last 16 of the Europa League after the sides played out a goalless draw at the WWK Arena on Thursday evening.

The Reds were denied victory in Germany by the well-drilled hosts, who stood firm in the face of a concerted second-half assault on their goal from the visiting team.

And Augsburg might even have snatched victory at the end, but were denied a famous win when Ji Dong-Won's arrowed effort clipped the bottom of the post.

The two teams will now meet again on Merseyside next week to decide what is a well-poised European tie.

For the first time since joining the club, Jürgen Klopp named an unchanged team from the previous fixture, keeping faith in the starting XI that defeated Aston Villa on Sunday.

It was the hosts - without a win in 2016 - who enjoyed the best of the early stages, however.

Raul Bobadilla was the recipient of two early chances, narrowly failing to meet a clever ball over the top before half-volleying a poor clearance at goal but seeing his effort bounce over.

But the Reds grew into proceedings, and fashioned several opportunities of their own as they ended the first 20 minutes on top.

Roberto Firmino was the architect of much of their good work, and it was his endeavour that saw him nip in to pounce on a loose Markus Feulner pass before seeing a left-footed shot saved.

The Brazilian then sent in a dangerous cross from the left after dribbling into the box, but was denied an assist by a physical challenge on Daniel Sturridge in the box.

The No.15 twice went close himself with a flicked header and a stifled effort after a fine Philippe Coutinho through-ball before the game took a further turn in the visitors' favour.

With 23 minutes gone, the dangerous Bobadilla was forced off through injury, with Caiuby his replacement, but that blow only seemed to strengthen the hosts' resolve as they ended the half as the better side.

Kolo Toure and Mamadou Sakho produced a number of clearances in central positions to ensure Markus Weinzierl's team weren't rewarded for their good play as the first half progressed.

And Augsburg were again denied in the final moments when Simon Mignolet produced a fine save from Alexander Esswein after he had burst into the box on the right-hand side.

The Reds atoned for their lacklustre finish to the first 45 minutes by playing their best football of the game thus far straight after the break.

The extra zip in their passing caught the hosts off guard, and it was this more forthright approach that saw Alberto Moreno find space on the left for a cutback that Coutinho side-footed wide.

It was a similar story moments later as a one-two between Firmino and James Milner resulted in the latter crossing for Sturridge, who could only get faint contact on the ball from a position where he is so often deadly.

With an hour gone, only a slice of poor luck prevented the visitors from going ahead, when a scramble in the box after a well-delivered Moreno free-kick somehow didn't end with the ball going beyond Marwin Hitz in the Augsburg goal.

And the keeper was again the recipient of some good fortune when he palmed a low Moreno effort into the air with 20 minutes remaining and the ball looped up just beyond his right-hand post.

After weathering that storm, Augsburg grew in confidence, and could have been ahead had Caiuby managed to get enough on a Kostas Stafyidis shot from the back post area.

They then so nearly claimed an aggregate lead in the final five minutes, with Ji unfortunate not to find the back of the net, rather than the woodwork, after meeting Caiuby's knockdown.