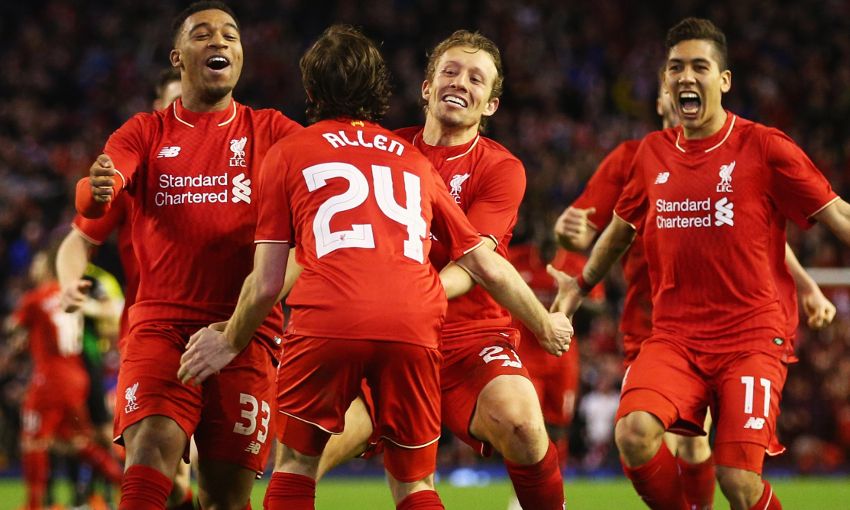 Joe Allen converted the crucial penalty as Liverpool secured a place in the Capital One Cup final with a 6-5 shootout victory over Stoke City at Anfield on Tuesday night.

The away side had to score at least once on the evening and Marko Arnautovic levelled the tie on aggregate in added time at the end of the first half by sweeping a finish past Simon Mignolet from Bojan Krkic’s assist.

No further goals in normal time and the 30 extra minutes meant a shootout, which Jürgen Klopp’s men won after 14 spot-kicks to prompt a chorus of roars and book a showpiece meeting at Wembley with Everton or Manchester City next month.

The pre-match team news confirmed two changes to the side that started the 5-4 thriller with Norwich City on Saturday – Jon Flanagan replaced the injured Nathaniel Clyne for his first start since May 2014 and match-winner Adam Lallana was drafted in for Jordon Ibe.

Klopp spoke at his press conference before the game about using ‘the whole power of LFC’ to see off the challenge of Stoke and the fans certainly rose to his call, generating plenty of noise behind their team as they attacked towards the Anfield Road end in the first half.

Even louder, though, was the 12th-minute tribute to Owen McVeigh, an 11-year-old fan who recently passed away. A flag in his honour was unfurled on the Kop and applause rippled around the entire stadium, followed by a touching rendition of ‘You’ll Never Walk Alone’.

The first chance of note was created by the visitors seconds later. Arnautovic released Jonathan Walters with a reverse pass into the Liverpool box, but Alberto Moreno quickly covered from left-back to block the shot at goal.

It was the same opponent threatening to break the deadlock on 22 minutes, running free and onside from the halfway line to reach a long ball forward. But his eventual effort across goal, left to right, drifted wide under late pressure from Mamadou Sakho.

Emre Can had sought to try his luck on several occasions before properly unleashing a swerving, 20-yard blast that swung too far to the right to truly trouble the diving Jack Butland.

As the interval approached, and with Liverpool finding it difficult to play through the organised Potters defence, Jordan Henderson attempted an ambitious half-volley from long range that bounced off target.

And Stoke then changed the landscape of the tie in first-half stoppage time. A fast break saw Walters pick out Bojan on the right flank and his instant cross was clipped into the net by Arnautovic for 1-0 and 1-1 on aggregate.

The Reds began the second period in much brighter fashion and Roberto Firmino was unfortunate to see a low prod stopped by the legs of Butland at the near post, having been teed up smartly by Henderson from a cleared corner.

Arnautovic and Johnson each fired over the crossbar from distance as the contest opened up, and Klopp switched up his attack by introducing Christian Benteke for Henderson shortly before the hour mark.

A lunging Sakho block kept out Walters’ hit from inside the area, Lallana drilled a shot wide to the left, and the former misjudged an inviting headed chance when James Milner whipped in a deep free-kick.

There was no lack of endeavour from Klopp’s men, with Flanagan notably a constant out ball along the right side despite his relative shortage of match fitness, but the final touch or finish was eluding them.

Stoke caused concern with a succession of set-pieces in the closing moments of the second half – Crouch nodding one too high at the back post – but the overall score remained deadlocked and extra-time was required.

The tension steadily increased during the additional period but the chances count did not, at least until substitute Marco van Ginkel latched onto a Crouch flick-on and placed a shot against the post, though perhaps having used a hand along the way.

And the same connection almost paid dividends in the 114th minute but the Potters midfielder’s angled strike on the stretch was collected by Mignolet.

So penalties were to settle the competition’s first finalists and it was 4-4 following the regulation five apiece, with Crouch and Can the only players to miss on either side.

Marc Muniesa was the unlucky man for Stoke as Mignolet clawed out his attempt and Allen bravely stepped up for the chance to send Liverpool to Wembley and coolly found the target. The Reds are heading for the capital.