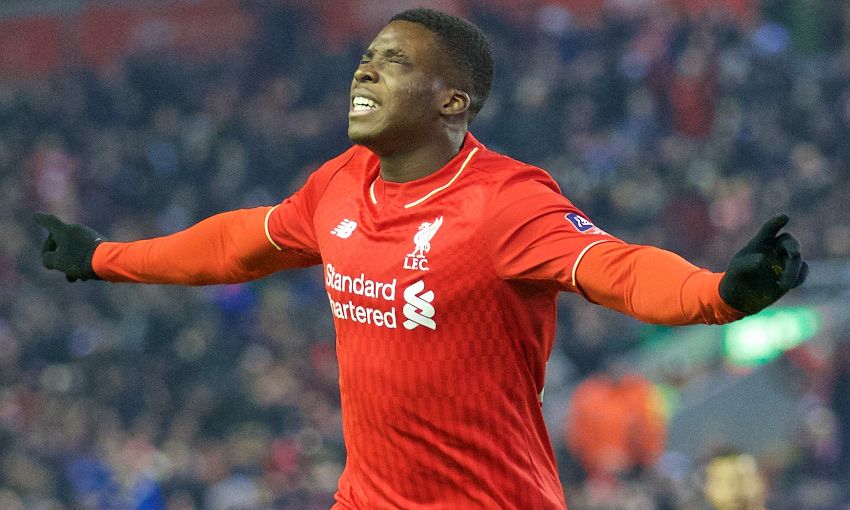 Liverpool set up an FA Cup fourth-round tie with West Ham United by seeing off Exeter City 3-0 in their replay at Anfield on Wednesday night.

Joe Allen’s early goal, a sublime second-half finish by substitute Sheyi Ojo and a late Joao Carlos Teixeira effort were enough to defeat the determined League Two outfit and secure progress to the next stage.

The reward for Jürgen Klopp’s Reds is a meeting with fellow Barclays Premier League side West Ham at home on Saturday January 30, kick-off 5.30pm GMT.

Klopp opted for wholesale changes to his line-up and as in the first meeting at St James Park 12 days ago, his faith was largely entrusted to youth, though Allen, Christian Benteke, Jordon Ibe and Simon Mignolet provided their experienced presence and Jose Enrique wore the captain’s armband.

The first chance of note fell to Benteke in the fifth minute as the Belgian’s strength allowed him to control a forward pass at the edge of the box and strike at goal on the turn – but his scuffed effort was easy for Bobby Olejnik to save.

Exeter’s goalkeeper was helpless on 10 minutes, however.

Brad Smith’s attacking nature saw the No.44 complete a one-two with Benteke along the left flank, surge into the space behind and square perfectly for Allen to finish first time and ruin any intentions from the visitors to frustrate their hosts.

Chances were consistently coming for Benteke and Liverpool’s No.9 would have expected to double the lead when Teixeira lofted an inviting cross to the back post. Instead, he headed just over.

Cameron Brannagan worked Olejnik with a low, bouncing shot on a diagonal from 20 yards and then fired inches too high from a similar position following an adventurous dribble and tee-up by the impressive Smith.

Klopp’s youthful team were controlling the game, working the ball from flank to flank in the search for an opening, but their League Two opponents had recovered from the early setback to settle into a solid defensive shape.

Ibe side-stepped into shooting territory and powered an attempt that Olejnik watched carefully to keep out, before the wide-man collected a short set-piece on the right and whipped one dangerously close to the opposite top corner.

Exeter got enough bodies between Benteke and the goal to block the striker’s latest effort in the closing moments of the half and the interval arrived with the score still 1-0.

The summer signing was thwarted by Christian Ribeiro at the outset of the second half, the Exeter man clearing away Connor Randall’s delivery to the back post so that it could not be knocked home from close range.

The Anfield crowd were cheering in the 50th minute – but not for a goal.

Rather, the applause was for the long-awaited and welcome sight of Jon Flanagan readying himself to come on for a first senior appearance since the final game of the 2013-14 season. Randall made way at right-back.

The visiting defence could only watch and hope when Ibe moved in from the right and unleashed a fierce blast with his left foot that cannoned against the crossbar, down and out. Replays showed the ball was not fully over the line.

He took a more intricate route to goal shortly after the hour, combining with Teixeira inside the area to aim for the bottom left corner but finding the advertising hoardings instead.

Ojo was introduced for his Anfield debut midway through the period and the forward might have added his name to the scoresheet had Smith’s cross from the same area as his first assist been accurate.

But the 18-year-old did give Klopp’s charges the cushion they craved in the 74th minute, collecting Ibe’s pass across the pitch and sweeping a delightful curler high into the roof of the net.

And further gloss was added to the scoreline for Liverpool with eight minutes remaining as Benteke, having found his own chance to strike crowded out, laid in Teixeira to coolly beat the goalkeeper. West Ham await in round four.

Watch the FA Cup fourth-round tie with West Ham in style with a brilliant Anfield hospitality package. Click here to find out more.