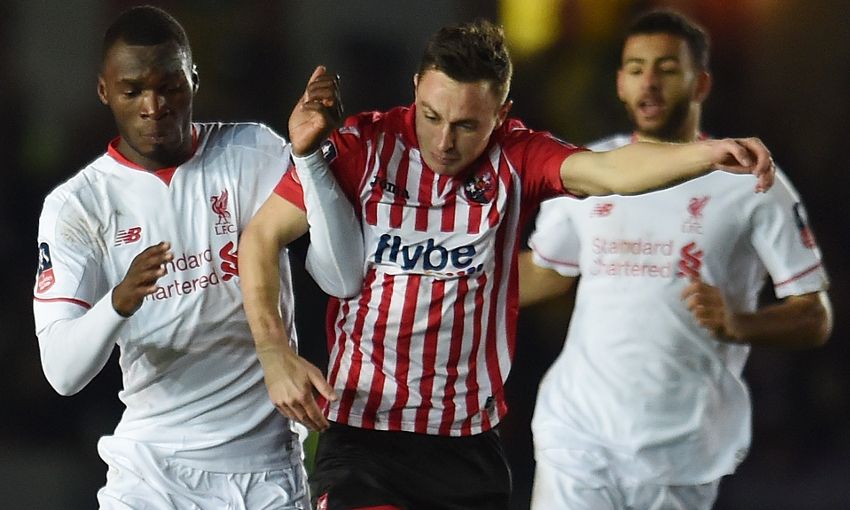 Jerome Sinclair and Brad Smith notched their first ever Liverpool goals as a young Reds side battled to a 2-2 draw with Exeter in the FA Cup third round on Friday evening.

Jürgen Klopp's team will now face the Grecians again at Anfield later this month to decide the tie after a hard-fought encounter at St James Park ended honours even.

The hosts led twice in the first half through Tom Nichols and Lee Holmes, but were pulled back on each occasion by Sinclair and Smith in a show of great character from an inexperienced team.

They will now hope to have another crack at defeating Paul Tisdale's team when they travel to Merseyside for a rematch.

The manager made 11 changes to the team that defeated Stoke City 1-0 in their last outing, with debuts handed to returning trio Tiago Ilori, Kevin Stewart and Ryan Kent.

The much-changed nature of the team did not appear to show in the early stages, as Joao Teixeira and Smith linked up to good effect down the left only for the Australian's low cross to be collected.

Stand-in captain Christian Benteke then almost latched onto a Sinclair through-pass, only for his second touch to overrun in unfortunate fashion.

Jamie Reid's tireless work down the right was rewarded with a yard of space and his pinpoint low cross was met at the back post by Nichols, who did well to finish on the slide.

Thankfully, it took the Reds just three minutes to respond, with Sinclair producing a cool finish in the box when the ball dropped following a challenge from Benteke.

The two teams exchanged chances in the aftermath of the goal, as David Noble fired over in the box before a fizzing Ryan Kent cross was just about cleared.

But Klopp's men suffered a disheartening blow moments before the break as Holmes' cross eluded the visiting defence and goalkeeper Adam Bogdan to nestle in the far corner.

The start of the second half saw a flurry of early action, with Christian Ribeiro denied a penalty after going down too easily under Jose Enrique's challenge before Benteke brought a save from Bobby Olejnik with a powerful header.

Klopp looked to reshuffle his pack shortly after, bringing on Pedro Chirivella in place of Kent to bolster the numbers in central midfield.

But the Reds continued to struggle to retain possession on a difficult pitch and were inches away from conceding a third when Nichols thrashed a free-kick over the bar from the edge of the box.

With 70 minutes on the clock, goalscorer Sinclair made way for Sheyi Ojo, and the changed proved an inspired one as the young winger played a key role in the equaliser that followed.

A slick team move resulted in him finding space on the left to provide a powerful cross that was forced into the path of Smith, who smashed home emphatically.

Ilori was forced off due to what appeared to be cramp in the 76th minute, with Joe Maguire his replacement, but the momentum looked to be with the visitors as they pushed for a winner.

Teixeira came agonisingly close to finding it only to see his poked shot blocked after being played in by Benteke before Ojo had a strong penalty claim turned down.

But Exeter found a second wind that helped them get over the line and secure a trip to Anfield where a fourth round berth will again be at stake.