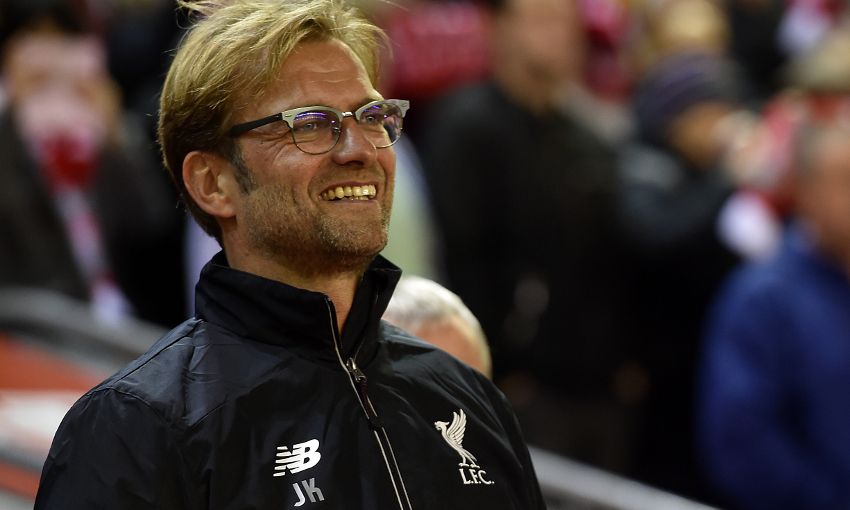 Jürgen Klopp declared himself 'really satisfied' after a mix of youth and experience guided Liverpool past Bournemouth and into the last eight of the Capital One Cup on Wednesday night.

The manager opted to shuffle his pack for the fourth round clash at Anfield, offering first senior starts to Cameron Brannagan, Connor Randall and Joao Carlos Teixeira.

His decision paid dividends and brought a maiden victory since the German took charge as a 17th-minute rebound strike from Nathaniel Clyne proved enough to secure progress to a quarter-final tie with Southampton.

A smile therefore broke across Klopp’s face at his post-match press conference given the opportunity to reflect on a positive evening’s work for his team.

“I feel much better than after a draw,” he said.

“But I don’t think the other games were so much worse than today – of course, the result is the biggest difference and we did well tonight.

“I saw minute by minute we were better in the game, we closed the spaces better and the whole 90 minutes we played football and created our chances. We didn’t have any real experience together, so I’m really satisfied – the boys did really well.

“We made a fantastic goal; Teixeira in the box and Clyne with him close enough, two boys from the left wing in the box because we had the space for it. That’s really good, that’s what we want. It’s the next step.

“We saw these young guys together with these experienced guys, Dejan Lovren, Kolo [Toure] – it was a shame he had to go out so early. But for Dejan it was very important, 90 very intensive minutes in this game.”

On his team selection, the boss continued: “I’ve been here round about two weeks and I saw these guys in training, and not only them but Pedro [Chirivella] and [Jerome] Sinclair.

“They were with us most of the time in training. I saw them and it was clear the first chance I could give them I would do it. That was tonight because we needed some players to have this break and not to play today again.

“And I was completely sure these players had the quality to help us tonight and that’s what they did. It was not easy. One week ago I said it’s not so easy to rotate, if you bring players to play together.

“That’s what we saw tonight – it was not all of them but it was the best they could do and so I’m completely satisfied.

“Cameron Brannagan was in a very difficult position in the system we played today, the half space as a No.8. It’s really not easy to defend that position.

“Connor Randall – all the long balls they played were in his space. If he was not a good header before this game, now he is much better! Because he had the chance to improve 20 or 30 times.

“I’m really fine with these guys. And, very importantly, the other players didn’t think because the manager did this it’s not such an important tournament. I saw in the eyes of all the players that they wanted to win tonight. That’s very important.”

Roberto Firmino caught the eye of the Kop with an energetic display in his first start since returning from a back injury suffered in the previous round of the competition.

The Brazilian almost completed the full match, clocking up 87 minutes, prompting Klopp to reiterate his appreciation for the summer signing from Hoffenheim.

He said: “It is important for a new player when he comes to a new club to show this, but he doesn’t have to show me anything because I know him very well.

“We all now know a little bit more about him and that’s important. It was very intensive for him tonight and if we hadn’t had to make a change in the first half with Kolo, we would have changed him [Firmino] a little earlier.

“We had to wait because maybe we would have to go into extra-time, so it was not easy [for him] but he worked really hard.

“He is ready, he is prepared for this league for sure, he is physically strong and a good technician – everything you saw. And usually he is a good finisher! He is a good player.”