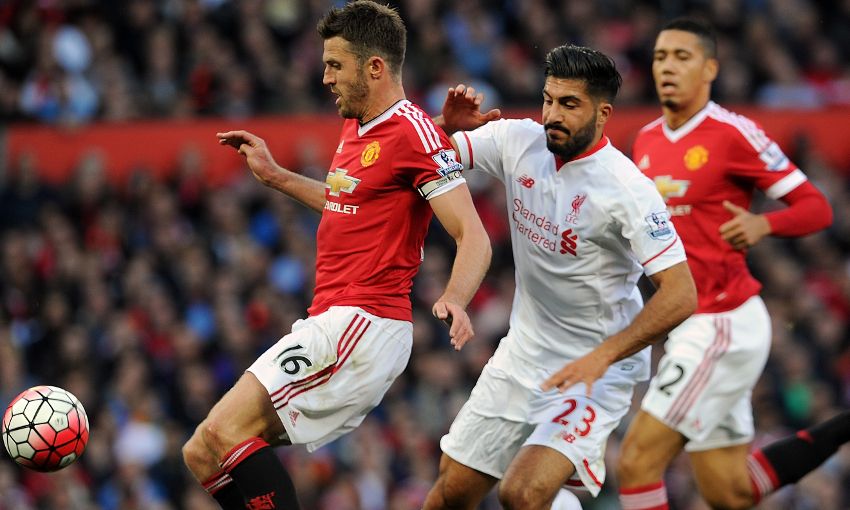 Liverpool suffered a second successive defeat in the Barclays Premier League after they were beaten 3-1 by Manchester United at Old Trafford on Saturday evening.

Daley Blind opened the scoring four minutes into the second half, meeting Juan Mata’s cut-back from a free-kick with a side-foot finish into the top corner from just inside the box.

The Reds threatened an equaliser – most notably when Danny Ings' close-range volley was foiled by David De Gea – but United’s lead was doubled when Ander Herrera crashed home a penalty having been brought down inside the area by Joe Gomez.

With six minutes left, Christian Benteke brought hope by netting via a sensational scissor-kick, but the home team made sure of the points as substitute Anthony Martial wriggled his way through the Liverpool defence to convert.

The pre-match team news confirmed a first start for summer signing Ings, replacing the suspended Philippe Coutinho in what was an otherwise unchanged line-up to the one that had taken to the field against West Ham United a fortnight ago.

It was the hosts who made the more assertive start to the contest and Marouane Fellaini perhaps should have done better when Simon Mignolet’s attempted throw out was deflected into his path by Mata; however, he scooped well over the crossbar from 20 yards.

Memphis Depay then had the visitors worried when he surged into the area, only to be held up by Lucas Leiva.

The Reds were required to withstand a lot of early pressure from the hosts, but the opening half failed to yield any clear-cut opportunities for either side. The visitors’ only attempt to threaten De Gea came in the form of a stabbed Nathaniel Clyne effort which was well off range.

However, within minutes of the re-start, United were in front. Mata steered a low free-kick to the edge of the area from the left, where Blind arrived to sweep into the top corner.

Liverpool reacted well and only a last-ditch challenge from Chris Smalling denied Benteke a tap-in from close range following some neat work between Clyne and Roberto Firmino.

United then had De Gea to thank for keeping their lead intact as he clawed Ings’ effort away from the top corner after the striker had met Dejan Lovren’s header into the area with an acrobatic volley.

On 64 minutes, Louis van Gaal’s side were able to breathe a sigh of relief as somehow the ball didn’t manage to cross the line as first Martin Skrtel’s header was hooked away by Blind before the Dutchman recovered to also thwart Firmino.

The Brazilian was replaced by Jordon Ibe shortly after as the game entered its latter stages at Old Trafford.

However, with 20 minutes left on the clock, United doubled their advantage. Gomez brought down Herrera inside the area and the midfielder stepped up himself to dispatch the penalty into the top corner.

The arrears were almost reduced shortly afterwards, but Benteke bulleted his header from James Milner’s centre over the crossbar.

With time ticking away, Ibe had a left-foot blast pushed around the post by De Gea before Liverpool did register on the scoresheet.

Ibe’s cross from the right was flicked up into the path of Benteke, who found the back of the net with a magnificently-executed overhead kick.

Nonetheless, any thoughts of a comeback were extinguished when Martial cut in from the left and manoeuvred into space before slotting beyond Mignolet.