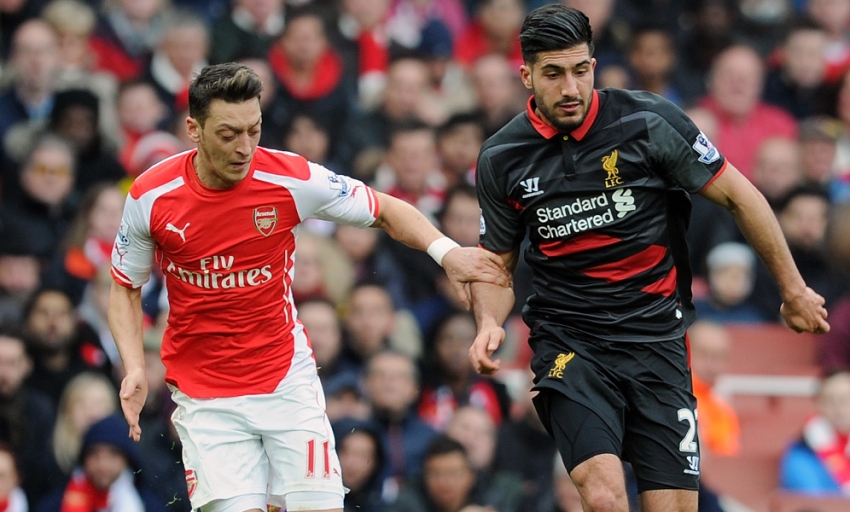 Liverpool's hopes of a top-four finish suffered a blow as they were beaten 4-1 by Arsenal at the Emirates on Saturday.

The Gunners struck three times in eight minutes at the end of the first half to condemn the Reds to defeat in north London.

Hector Bellerin put them in front when he found the bottom corner with a low curler on 37 minutes and Mesut Ozil quickly doubled their lead with a free-kick soon after.

Alexis Sanchez made it 3-0 before half-time, drilling beyond Simon Mignolet from the edge of the area.

Liverpool toiled in an attempt to muster a response after the break and Jordan Henderson netted from the penalty spot with 15 minutes remaining.

But Emre Can was sent off after a second booking before Olivier Giroud netted in injury time to seal Arsenal's victory.

Three changes were made by Brendan Rodgers to his line-up as Liverpool returned to action following the international break.

Kolo Toure replaced the suspended Martin Skrtel in defence, while there were also starting berths for the fit-again Lucas Leiva and Lazar Markovic. Raheem Sterling spearheaded the attack, with Daniel Sturridge among the substitutes following a recent knock.

It was the hosts who began the lunchtime kick off in the ascendancy. Only a handful of minutes had elapsed when Santi Cazorla's drive across goal brought a reflex stop from Mignolet.

Soon after, the Reds were fortunate not to have found themselves behind when Aaron Ramsey dispossessed Toure just outside the area. He raced through, but was thwarted by the left glove of Mignolet. Cazorla attempted to tuck in the rebound, but Toure had recovered to clear.

The visitors were having to withstand heavy pressure, but they carved out a glorious opportunity to take the lead against the run of play on 19 minutes.

Philippe Coutinho's reverse pass sent Markovic through on goal. The winger elected to square the ball for the unmarked Sterling, but it was just a yard in front of his outstretched boot and he was unable to make contact and turn it into an open goal.

Still, it was a sign Liverpool were beginning to assert themselves on proceedings - and after Coutinho had clipped just off target from range, Sterling had David Ospina scrambling across his line after his edge-of-the-box-drive evaded the far post.

However, Arsenal did break the deadlock with 37 minutes on the clock. Bellerin collected possession on the right and skipped into the area before jinking beyond Alberto Moreno and curling into the bottom corner.

It was the first goal the Reds had conceded away from home in the Barclays Premier League since the trip to Manchester United on December 14 - and it was soon followed by another.

Ozil ensured the Gunners' advantage was increased when he whipped a free-kick around the visitors' wall and into the corner from 20 yards.

Arsenal added another before half-time when Sanchez stepped inside Toure's attempted challenge and blasted beyond Mignolet from the edge of the box to give his side an emphatic advantage at the break.

Sturridge was introduced as an interval substitute, taking the place of Markovic as Liverpool looked to try and reduce the arrears.

But only a strong hand from Mignolet prevented an Arsenal fourth when he flicked Giroud's close-range header over the bar in the early stages of the second half.

At the other end, Can's blast was palmed around the post by Ospina before Coutinho's control and snap-volley cleared the upright from range.

With 15 minutes remaining, Liverpool were awarded a penalty when Bellerin tripped Sterling inside the area. Henderson successfully converted to add intrigue to the final stages.

However, a second yellow card for Can on 85 minutes was followed by a stoppage-time strike from Giroud to compound frustrations on ultimately an afternoon to forget for the Reds.