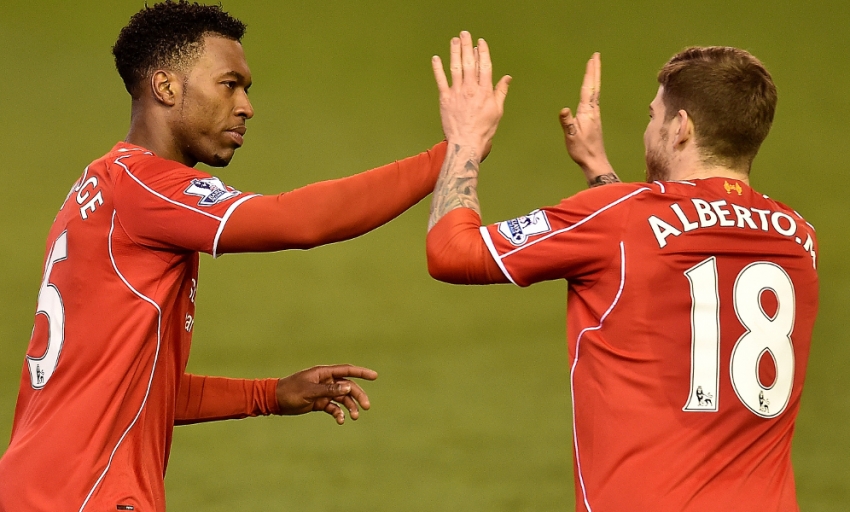 Jordan Henderson's fifth goal of the season, a searing half-volley from 20 yards, set the Reds on their way to a seventh win in eight Barclays Premier League games.

Three points, and a 12th match unbeaten in the division, were sealed in the second half when Henderson turned provider for Daniel Sturridge to nod in a wonderful header.

The outcome returned Brendan Rodgers' side to fifth in the Premier League table, trailing Manchester United by two points and Arsenal by one more in the race for the top four.

Rodgers almost wholly retained faith with the starting XI that defeated Manchester City on Sunday, making a single change - Sturridge assumed the centre-forward role, with Lazar Markovic named among the substitutes and Raheem Sterling operating from the right.

Just 26 seconds had elapsed before Sturridge unleashed his first shot. An incisive one-two with Adam Lallana at the edge of the box was the genesis of the chance and his low, whipped effort was on track for the bottom right corner until Tom Heaton clawed it away with fingertips.

Burnley had proven stubborn opposition in the last meeting between the two sides, the Reds eventually claiming a slender 1-0 win against Sean Dyche's men at Turf Moor on Boxing Day.

And they were by no means overawed here either. Instead, it was an arduous opening 20 minutes for Liverpool.

Heaton's reflexes were tested again on 23 minutes, however. Sturridge teed up Sterling, creeping along the flank in support, and in turn he pulled it back for Henderson. Seeking a second goal in successive games, the captain chose a side-foot attempt that the Burnley stopper pushed around the post.

From the corner, a loose ball bounced out to Emre Can 35 yards from the Kop net. In unison, the demand came to 'shoot'. So he did and as Michael Keane tried to divert it to his goalkeeper, Sturridge was unfortunate not to capitalise.

But, on 28 minutes, a breakthrough. Where Henderson had opted for placement previously, now power was the route. And it worked; the No.14 was in prime position to seize upon a blocked Philippe Coutinho hit and decisively thrash an arcing, rasping strike past Heaton's left hand and home.

Coutinho has notched three Goal of the Season contenders in the last month and nearly added a fourth when he sent a curler, from a similar angle to his winner beyond City, inches wide of the far post.

The outstretched leg of the Burnley 'keeper was next to prevent the lead from increasing. Lallana's pressure forced an error, Coutinho released Sturridge in behind and the Englishman's aim toward the left was thwarted.

Where Sturridge had been denied at the outset of the first half, he made no mistake six minutes after the teams emerged for the second period.

Lallana held possession in opposition territory, waiting and waiting for an avenue. Ultimately, it involved a lay-off to Henderson, who adopted creator mode to spin an exceptional back-post cross for the waiting striker to head accurately inside the edge of the goalframe for 2-0.

Burnley continued to ensure it was a contest, belying their place in the league standings, Ashley Barnes dragging a shot off target at the near post serving as a reminder for full concentration.

Elegant footwork by Lallana could have put the game out of reach for the visitors as it moved into its final quarter. His quick feet fooled the defence and an immediate effort looked dangerous until finding Jason Shackell in the way.

It was that comfort on the ball, each player's willingness to take it, give it and hold it, that helped the Reds dictate how the time that was left unfolded. Their control of possession stayed firmly above the 60 per cent mark.

They did need a ruck of bodies late on to quell Clarets midfielder David Jones, who lined up an angled effort with intent, but an eighth clean sheet of 2015 was preserved and more maximum points banked.