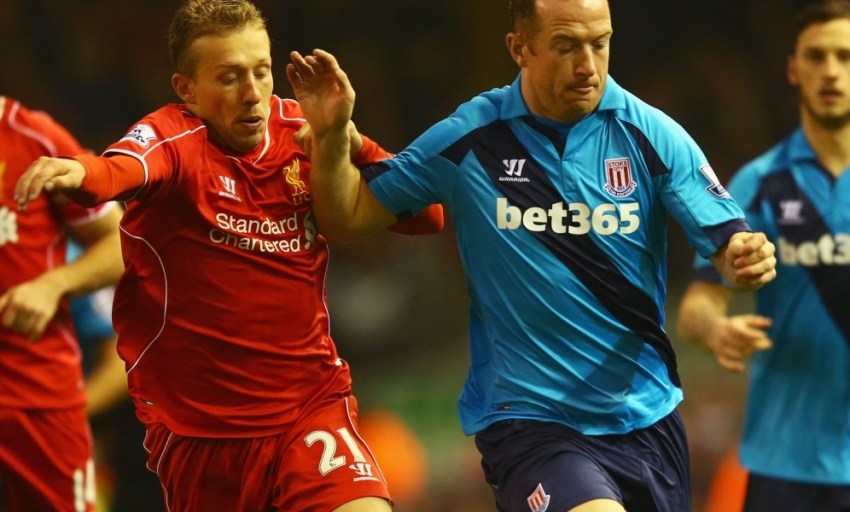 Brendan Rodgers has praised two players whose game-time may have been restricted this season, but who both made invaluable contributions during two vital matches for Liverpool last week.

Lucas Leiva and Kolo Toure had accumulated a combined total of eight starts between them prior to the Reds' penultimate Champions League Group B clash against Ludogorets Razgrad on Wednesday.

Rodgers gathered his players for a meeting before the game, in which they outlined plans to bring a disappointing run of four consecutive defeats across all competitions grinding to a halt in Sofia.

The team, with Lucas and Toure installed, managed to do so; however, a last-minute intervention from Ludogorets' Georgi Terziev took the shine off an improved display and consigned the Reds to a 2-2 draw.

At Anfield on Saturday, it looked as though Stoke City, while fashioning opportunities of their own, were about to repel all that Liverpool could throw at them in search of a goal, until Glen Johnson nodded a late winner.

Toure partnered Martin Skrtel as the team recorded a third clean sheet of the season in the 1-0 win, while Lucas added midfield steel before making way for Steven Gerrard - and Rodgers believes the pair were key to three points.

"I'm very happy with their performances," the boss told Liverpoolfc.com from the Anfield tunnel following his side's first win since Swansea City on October 28.

"I think their contribution has been vital in the last two games. They are players who understand the league, players who are experienced and players who are winners. Both have been outstanding and they haven't played a great deal, but they've come into the team and done very well."

After a dour first half against Stoke, the game erupted into life from the moment Jordan Henderson sent a half-volleyed effort crashing towards the Kop and a yard wide of Asmir Begovic's left post.

From there, the game ebbed and flowed from end to end. Bojan Krkic, the Potters' star player in the game, released Mame Biram Diouf, but Simon Mignolet was there to deny the forward with his legs from close range.

Bojan clattered the post cutting in from the left; Raheem Sterling dragged a shot inches wide; Lucas raced through and hammered at Begovic; Joe Allen fired onto the bar from yards out - all in the space of eight minutes.

Anfield could have been forgiven for thinking the game was destined for a draw - and those thoughts will only have intensified in the split-second between Rickie Lambert's header crashing off the crossbar and Johnson racing in to nod the rebound home.

"It was hard-fought," admitted Rodgers. "We showed wonderful courage and patience to keep going in the game. The first half was a bit slow. We had a lot of the ball but not so many chances.

"I just felt that in the second half we needed to turn the screw a little bit in terms of our intensity and the speed of the game. And then we looked as if we would get a goal and thankfully we did.

"I think you see a group of players who recognise that we haven't been to the standards that we expect. But you can see their ability to want to keep going and to improve."