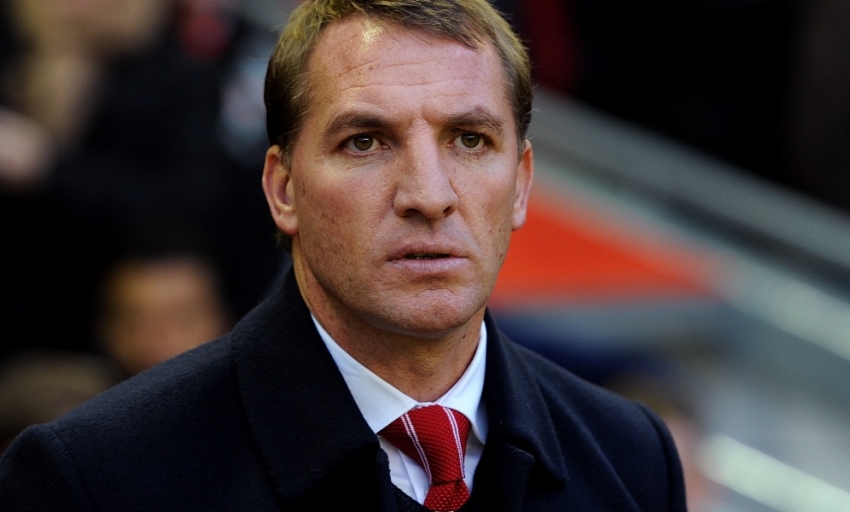 Brendan Rodgers highlighted the determination of his players after Liverpool recorded a first Barclays Premier League win in five games with a 1-0 victory over Stoke City at Anfield thanks to Glen Johnson’s dramatic late header.

With the game edging towards a stalemate, the full-back reacted quickest after Rickie Lambert's header crashed against the crossbar to stoop and nod the ball over the line and secure three valuable points.

With the Reds continuing to press right until the end, despite it looking as though time may run out, Rodgers was left delighted by his side's approach and mentality.

Reflecting on the contest in his post-match press conference, he said: "I'm satisfied. People look at how my teams like to play and I think they think I'm happy with 5-3 and 6-4 - I'm equally, if not more than happy, with 1-0. You can't play perfect football.

"We have shown wonderful character this week; we should have won our game in the week, and in Europe it is never easy. Today, in the Premier League against a good team, we have kept a clean sheet and won against a team that doesn't concede many goals.

"I was very satisfied and my overriding feeling was that I was delighted for the players because they are a wonderful group to work with."

Johnson's match-winner came as an end-to-end second half reached its crescendo - a 45 minutes in which both teams had chances to open the scoring, though it was Liverpool who had the greater ascendancy.

This was in contrast to an opening half that yielded few opportunities at Anfield.

Reporters, therefore, quizzed Rodgers on the words he used at half-time to rouse the Reds.

"I thought in the first half we had enough of the ball, but lacked a little bit of intensity, which is understandable because the confidence of the team isn't at the top yet.

"In the second half we were excellent and you just felt it was coming. The players deserve a huge amount of credit for the courage they showed today to keep going, and the resilience and persistence against a good side that have got really good players.

"A hard-fought victory for us, but a well-deserved one, I felt."

In netting his winner, Johnson sustained a cut to the head as he beat goalkeeper Asmir Begovic and two further Stoke defenders to the loose ball.

The courage shown by the Liverpool No.2 was indicative of the kind of battling attitude that will see the Reds turn their campaign around, Rodgers explained.

"Glen showed great anticipation," said the manager. "The cross comes into the box to Rickie, who's been brilliant for us and today showed great courage to get his head on the ball.

"It looked like it was going in and if you watch Glen's anticipation, he was on the move and he shows great courage and bravery [to connect with the ball]. That's something that the players have had, so it's disappointing that we haven't showed that of late.

"I think that confidence has been a little bit low. But before the Ludogorets game, we spoke in terms of how we are going to move forward and the standards that we have set here and how we need to get back to that. It's not going to go back immediately, but you have to show resilience and courage and then football will come out.

"I thought in spells today our football was excellent. But we had to defend and we have to ensure that we defend with that mentality and then we'll get results."

Despite Liverpool's goal coming with just four minutes of normal time to play, an additional seven presented Stoke with hope of clinching a point.

And they would have done so but for a magnificent Simon Mignolet save to thwart a volley from Bojan Krkic deep into stoppage-time.

"He's made a couple of great saves there," Rodgers said of his goalkeeper. "I asked him to simplify his game and do what he's good at, which is shot-stopping.

"He came for a couple of crosses, especially at the end there when the pressure was on and it becomes a war at the end of the game with so many big players.

"He made a couple of great saves today and I am very pleased for him because he's a good guy who is working very hard at his game."

Rodgers elected to make two changes to his starting line-up for the visit of the Potters, and it was the decision to name Steven Gerrard on the bench that reporters were eager to investigate - particularly as today marked the 16th anniversary of the captain's first-ever appearance for Liverpool.

With the 34-year-old having already played two matches this week away to Crystal Palace and Ludogorets Razgrad, and with a trip to Leicester City to follow on Tuesday evening, the Reds boss outlined why he felt it important to afford the skipper a breather.

"Steven is at the part of his career where he's not going to be playing in every game and every minute of every game," explained Rodgers. "He's played against Crystal Palace and in Ludogorets, where he was outstanding and put a huge amount of effort into the game.

"We've got other players who can come in and do the job, and Steven understands that.

"I wasn't actually aware it was 16 years until I walked into the changing rooms and saw the programme, but with Steven you wouldn't know whether he was playing or not because he's a guy who is very much a team player. He's a great guy and he always plays a part in our work.

"I need to look at each game and position the players and team that I think can get the result.

"We've got good players on the sidelines who are fresh. Steven came on and gave a great contribution towards the end. His experience and stature in the game helped us at that point, but I the team overall was excellent."

Rodgers was keen to highlight Gerrard's typically professional response to learning he wouldn't be starting the Stoke clash.

"He didn't tell me it was his 16th anniversary," revealed the Northern Irishman. "I felt quite bad actually when I looked at the programme. There were 20 pictures of him [on the front cover].

"He's a wonderful man and he's very much about the team. He understands. Of course, every player would love to play in every minute of every game, but the reality is that at this level and how competitive it is and the squad that we have here, we can't be just relying on Steven in every single game.

"He's been brilliant for me in my time here and he will continue to be. But we've talked and looked at when he can play."

Meanwhile, Rodgers had words of praise for the likes of Lucas Leiva and Kolo Toure, who have impressed having been restored to the starting XI for the past two matches.

He explained how their experience has aided his side, but was keen to stress Liverpool's younger players will continue to get their own opportunities over the course of the campaign.

Rodgers said: "We have brought players in and most of them have been young players - they are not just for now, they are for the long-term. At this moment in time, we need players in the team that have got quality and experience.

"Lucas Leiva has come into the team and been outstanding in his two games - very tenacious, aggressive and can pass the ball. Kolo Toure's experience coming into the team has been good for us. The team is mostly full of players that have got the experience.

"The younger players will get an opportunity over time, of course, but we are in a moment where we need to get results and improve our style of football.

"We need to have confidence in the team and we're slowly, in the last couple of games, getting back to a confident level."