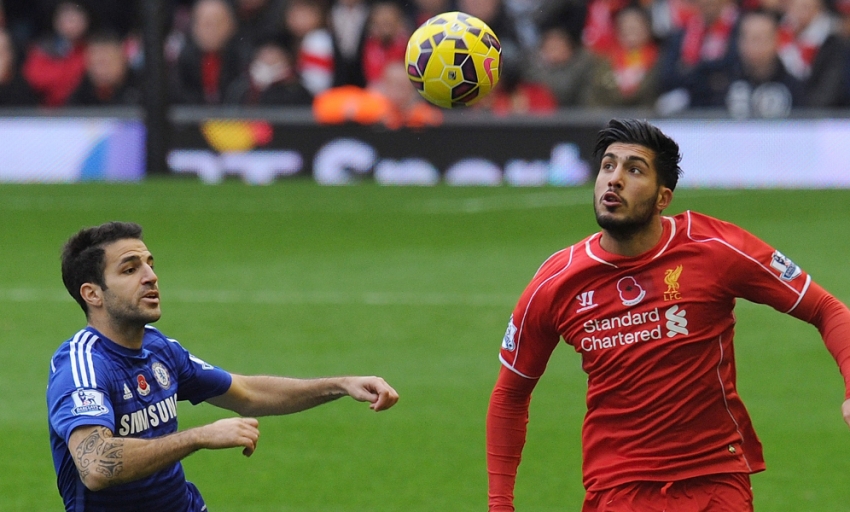 Liverpool were narrowly beaten 2-1 by Chelsea in the Barclays Premier League on Saturday afternoon as Diego Costa's second-half strike made the difference at Anfield.

Emre Can set the tone for an exhilarating contest when his long-range punt took a heavy deflection and soared in, but the Londoners soon struck back - Gary Cahill clipped over the line from close range when a corner caused a scramble.

But the decisive contribution came from Costa, with the Spain international capitalising on a loose ball at the back post to power home a winning goal three-quarters of the way through a tie that was evenly-fought throughout.

Welcoming their team home following a pair of successive away fixtures, Kopites ensured there was a strong noise roaring behind the Reds from kick-off. And signalling the intent, Can sent a deflected strike looping off target after just 30 seconds.

Both sides were hugely expansive during the opening exchanges, committing men forward in every attack and counter, and it was the hosts that initially took advantage of the space left available, with nine minutes played.

Composed passing by Steven Gerrard and Jordan Henderson from the back released Raheem Sterling, who fed Can to the right. Accepting the invitation, the German midfielder blasted from distance again and once more it took a deflection - this time off Cahill - before flying high beyond Thibaut Courtois and into the net.

The lead was held for only five minutes, however. At the Kop end, Costa rose highest to knock on a corner delivery into John Terry, but the defender's header was beaten out by Simon Mignolet. Unfortunately, Cahill was waiting to quickly force over the line and secure an equaliser which was awarded with the use of goalline technology.

The tempo was relentless; Mario Balotelli side-footed the ball home from Philippe Coutinho's pass but was ruled offside, while Brendan Rodgers and his players were soon shouting for a spot-kick for handball as Sterling's drive was blocked.

Chelsea struggled to cope with the trickery and agility of Coutinho at times and one fine solo dribble from his own territory allowed the No.10 to surge into the centre, 20 yards from goal, and pummel an effort that Courtois leapt low to palm out.

Glen Johnson covered crucially when a rapid Blues break moved from right to left in an instant and teed up Eden Hazard for a promising opportunity. As the Belgian shaped a curler, though, the full-back blocked. He denied the same opponent again seconds later too, to quell his former employers.

Concession of possession almost cost Liverpool dearly four minutes before the interval and it was another situation with Hazard the ultimate protagonist, but Mignolet collected his shot comfortably to herald half-time with the score level at 1-1.

Following the restart, Oscar whipped too wide of the far post from the corner of the penalty area and Costa looped an acrobatic overhead-kick into the stand, having been played in behind by the onrushing Hazard's lofted pass.

Can and Coutinho's intelligence and determination continually carried the Reds into the opposition half and the duo's approach work created a chance for Sterling. The 19-year-old's hit was stopped by the goalkeeper and nobody could pounce on the rebound.

It was a different story at the other end in the 67th minute. In a moment much disputed by the home fans, Cesar Azpilicueta kept the ball in play wide on the left, scampered into the Liverpool box and fired a cross-shot that Mignolet redirected. But as it bounced loose, Costa thundered underneath the bodies.

A combination of Azpilicueta and Nemanja Matic then contrived to thwart a Henderson volley at the back post that had been smartly assisted by substitutes Joe Allen, with a left-flank cross, and Fabio Borini, via a headed flick-on.

Rodgers' charges were in territorial control for what remained of the encounter but could not find a way past the unbeaten Premier League pace-setters, with domestic fixtures now set to pause for an international break.