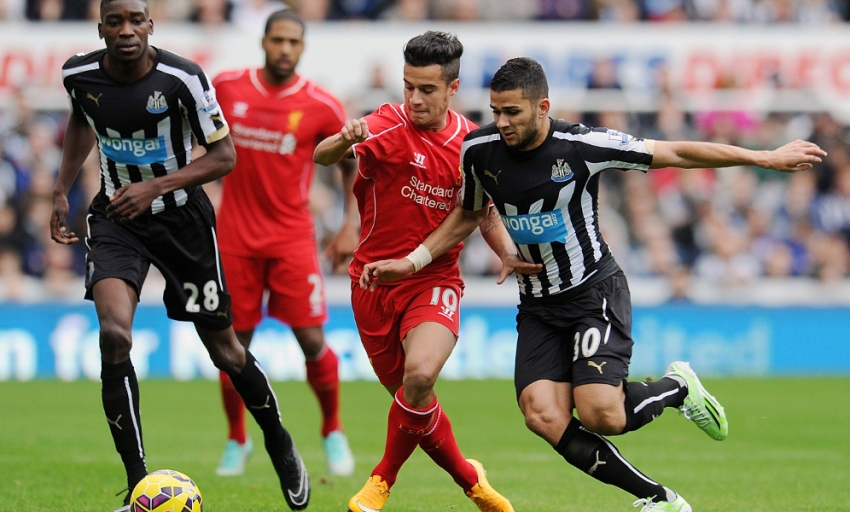 Liverpool suffered defeat in the Barclays Premier League by Newcastle United on Saturday as the hosts claimed a 1-0 victory through a second-half Ayoze Perez strike at St James' Park.

The Reds approached the contest having won two and drawn two of their previous four fixtures in the division, but were undone on this occasion when the Magpies' No.17 thrashed home late in the game.

Brendan Rodgers' chosen XI in the north east showed three alterations to the side that was held by Hull City seven days ago - Philippe Coutinho, Jordan Henderson and Glen Johnson were named in place of Adam Lallana, Emre Can and Javier Manquillo respectively.

Backed by vociferous away support from high up in the stands, Liverpool kicked off on the front foot, although it was the hosts who created the first opportunity on four minutes when a cross swung in from the left fell to Papiss Cisse at the edge of the area. Martin Skrtel was there to deflect his shot behind, however.

Gabriel Obertan was soon providing real concern to the Reds by scampering along the right flank past Coutinho and Dejan Lovren challenges. The wide-man's delivery into the middle reached Moussa Sissoko too, only for Joe Allen to smartly cover in and nick back possession.

Neither side were mustering serious chances during the opening 20 minutes, although there was an underlying sense that a breakthrough was not too far away. Lovren had to be alert to head away a Sammy Ameobi cross and Skrtel once more blocked out a strike, this time from Mehdi Abeid.

Alan Pardew was forced into an early substitution after Obertan pulled up with an injury; Rolando Aarons was the man introduced. The brief break in play also allowed Rodgers to issue fresh instructions to the likes of Johnson, Raheem Sterling and others as his team sought an advantage.

An immediate driving dribble by Aarons into Liverpool territory drew perhaps a harsh free-kick that Abeid smashed wide of the left post from a Jack Colback tee-up, before Johnson was required to nod off the goalline when Cisse threateningly redirected a Newcastle corner.

With six minutes remaining in the half, the travellers generated their most appealing chance so far. Stationed on the right, Steven Gerrard curled in a precise corner that married perfectly with Skrtel's burst forward into the six-yard box. Once there, though, the centre-back powered the header off target.

Out for the second period, there was another change - Cisse departed for the Magpies, with Perez switched in. The latter was quickly problematic for the Reds too, stealing control from Johnson 20 yards out, but Lovren swept in behind to nullify any danger.

Mario Balotelli blasted a set-piece from 30 yards that was too low and central to worry Tim Krul and the Newcastle goalkeeper was relatively comfortable shortly after, when Sterling fed the Reds' No.45 and he dispatched a strong, right-footed curler toward the far post.

Paul Dummett, a goalscorer in the corresponding fixture of 2013-14, thundered a drive over the crossbar from long range as a goal continued to elude each team. With that in mind in the 66th minute, Liverpool opted for a change: Fabio Borini entered in place of Allen.

But it was the Magpies who finally found the deadlock-breaker with little more than a quarter of an hour left to play. Alberto Moreno stumbled over a cross into the penalty box and Perez pounced to fire hard and true underneath Simon Mignolet for 1-0 to Pardew's charges.

They could have doubled that advantage within moments as a rapid, two-man counter-attack by Perez and fellow substitute Remy Cabella carried both free behind the defence. The outstretched right foot of Mignolet thwarted the latter when he eventually struck, however.

Ultimately, one goal proved enough, with Liverpool unable to find a leveller before Andre Marriner blew the full-time whistle on a frustrating match for Rodgers and his players.