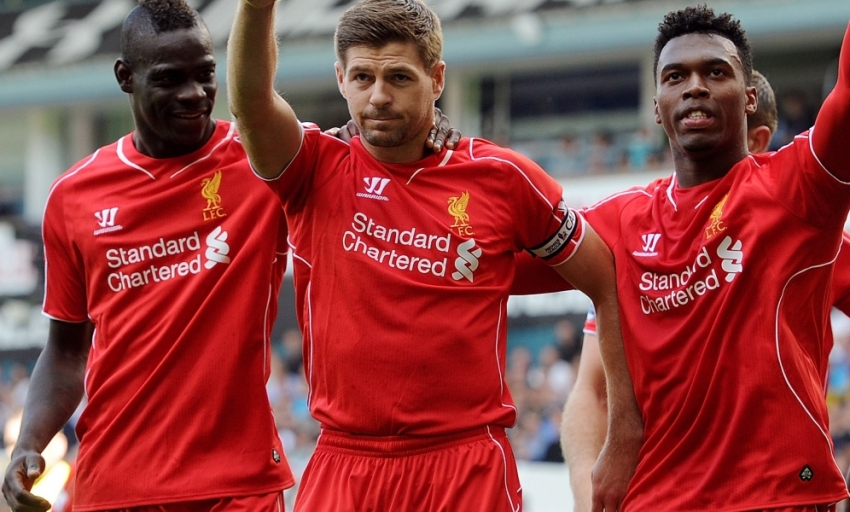 Boss: What impressed me most about Borini

Liverpool captain Steven Gerrard has confidence that both Mario Balotelli and Daniel Sturridge can find their finest performance levels to help the Reds flourish in pursuit of their ambitions this season.

Balotelli required just seven minutes to knock home his second goal for the club on Tuesday evening, having entered the Capital One Cup tie against Swansea City as a late substitute.

Darting into the penalty area, the Italian was the grateful recipient of a sublime cross by compatriot Fabio Borini, prodding in a first-time finish at the Kop end to level the score with the Welsh side.

His conversion paved the way for fellow summer signing Dejan Lovren to power in a stoppage-time header at the back post and book a berth in the quarter-finals of the competition.

Always cited by teammates as a guiding presence around Melwood, Gerrard will continue to provide helpful support that can accompany the extra work undertaken each day by Balotelli.

"Mario has the ability to turn it around," the midfielder told the Daily Telegraph. "I am not going to judge him after 10 games. I have to help and support him.

"To be a main striker at Liverpool you have to expect the pressure and the responsibility and embrace it. Our fans expect us to win every game.

"You have to accept and embrace it and enjoy the pressure and the fact you are being judged. That's what I have learnt to do since I was 19. He's a big lad. He's played for big clubs and has had the responsibility before.

"He's not feeling sorry for himself. He is working hard, doing extra shooting sessions and doing everything he can to make it work. I've been impressed with the way he goes about his work."

Turning his attention to another member of Brendan Rodgers' striking ranks, the skipper spoke glowingly about the currently injured Sturridge, who has not featured for the Reds since August 31.

The No.15 suffered a thigh injury and then, as he neared a comeback earlier this month, was set back by a calf problem, denying Liverpool the services of a striker whose Anfield record shows 36 goals in 52 games.

Gerrard cannot wait to welcome the Englishman back to duty, not least because he considers his colleague to be among the very best produced by his country in recent years.

"Ability-wise, Daniel is possibly the No.1 English striker I've played with," he said. "When you talk about speed, sharpness and skill and different types of goals, he could go as far as he wants to.

"Who in this country is better? Wayne Rooney is different, between a No.9 and No.10 for me, but Wayne is 29, Daniel is 25. Some of the things he does in training blow me away.

"I knew he was good but I saw what he could do last year. His goal-to-game record is scary. Now it's for Daniel to be Liverpool's iconic No.9 - the main striker - for many years."