Jordan Henderson will assume the role of Liverpool captain when the Reds welcome Swansea City to Anfield in tonight's Capital One Cup fourth-round clash.

Brendan Rodgers has made wholesale changes to his starting XI for the tie - with Lazar Markovic, Philippe Coutinho and Fabio Borini amongst a host of players who return to the team.

The manager makes nine alterations to the line-up he sent out to face Hull City during the Reds' 0-0 draw in the Barclays Premier League on Saturday. Only Dejan Lovren and Javier Manquillo retain starting berths.

Brad Jones has been handed his first start of the season, coming in to replace Simon Mignolet in goal for the 8pm kick-off. In front of the Australian, Kolo Toure and Glen Johnson are preferred to Martin Skrtel and Alberto Moreno.

Coutinho is switched into the team for Adam Lallana, while the No.10's compatriot, Lucas Leiva, comes in for Steven Gerrard to make his fourth start of the current campaign. Henderson begins the match ahead of Emre Can.

Up front, Borini will feature from the first whistle for only the second time this season as Rodgers fields the Italian alongside summer signing Rickie Lambert, with both strikers eager to claim their first goals of 2014-15.

Jordan Rossiter, who scored on his debut for the club against Middlesbrough in the last round of the competition, has been named as part of a strong substitutes' bench, which includes Mario Balotelli. 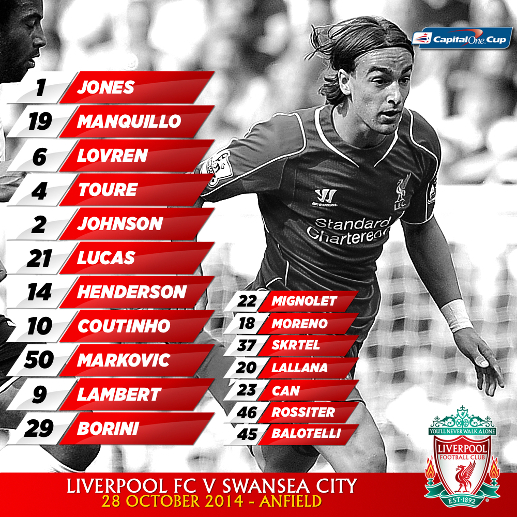