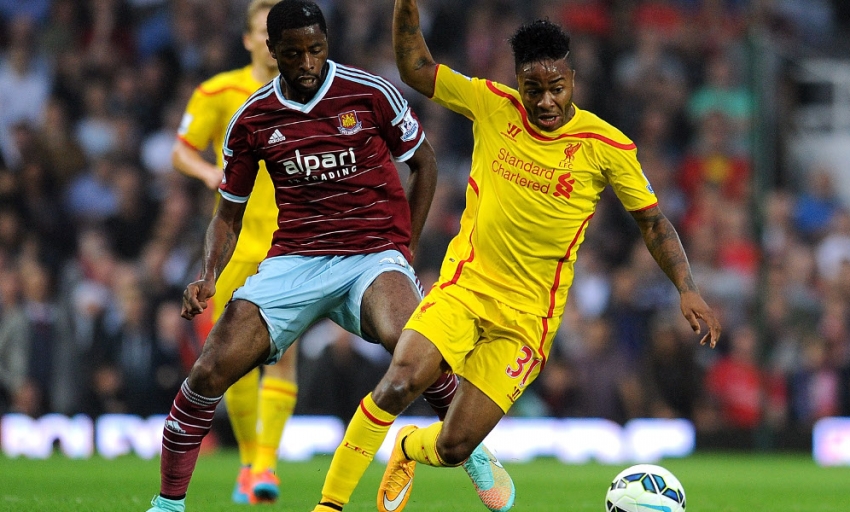 Liverpool were beaten for the second weekend running in the Barclays Premier League on Saturday evening, suffering a 3-1 defeat by West Ham United at Upton Park.

Quick-fire conversions by Winston Reid and Diafra Sakho forced the travellers firmly onto the back foot, only for Raheem Sterling to sumptuously piledrive home and grasp hope of a comeback before the half-hour mark in east London.

But despite a wave of attacks throughout the second half, no leveller could be found and, in fact, it was the Hammers who hit the net again - Morgan Amalfitano toe-poking in late on to secure the result.

If the bristling atmosphere inside the ground, in part created by a vociferous rendition of the home side's own anthem, had not already added to the task awaiting the Reds, then a goal for the hosts after a mere two minutes certainly did.

When a free-kick was awarded on the far right hand side, former Anfield winger Stewart Downing stood over the set-piece with intent to utilise his left foot. His target was reached too, with the swinging delivery finding James Tomkins, who nodded back for Reid to force in from yards out.

Unfortunately, it got much worse before seven minutes had elapsed. Fierce pressing by Sam Allardyce's team snatched possession deep in Liverpool territory, allowing Mark Noble to spread a smooth pass into Sakho and the forward wasted little time in lofting up and over Simon Mignolet and into the opposite corner from the flank.

The Hammers were relentless and the Reds' goalkeeper was required to launch left when Aaron Cresswell crept up in support from full-back and swiped a vicious low strike that was destined for the net until Mignolet stretched adequately enough to crucially palm away.

He had to be equally alert to a hit of admittedly less immediate threat when the confident Downing burst through the middle and sought a third, while Mario Balotelli and opposition stopper Adrian followed Reid into the book after an altercation when the Italian attempted to quickly close down.

Rodgers had seen enough to prompt an early, but considerable, tactical reshuffle - Sakho was introduced for Javier Manquillo, with Sterling moving to a wing-back berth on the right and three defenders lining up centrally.

The Northern Irishman was rewarded for the decision instantaneously; Jordan Henderson's clip into the penalty area was controlled superbly by Balotelli and though the No.45's shot was blocked by Cresswell, Sterling seized on the rebound to thunderously thrash the ball into the back of the net on the half-volley.

Mignolet ensured another name was not added to the scoresheet when he lunged wide to push away a dipping free-kick from Enner Valencia, then an extended delay ensued as teammates Dejan Lovren and Sakho clashed heads aerially, forcing the former to continue with a bandage.

Liverpool's 'keeper dived at his near post to thwart the lively Valencia when he dispatched a powerful drive from the edge of the area, and the only let-up in tempo arrived once six minutes of stoppage time at the end of the opening period concluded.

Rodgers made a further change for the beginning of the second half, with Lallana entering the action for Lucas. The England playmaker almost contrived an opportunity with a neat flick into Sterling, whose left-foot snapshot was no trouble to Adrian.

The Italian connection between Balotelli and Borini was evident when a swirling side-foot pass into the latter generated freedom inside the right channel and in behind the West Ham defence, but the forward's blast from a narrow angle was handled with relative ease.

Suddenly the Reds were posing the kind of consistent threat that had been absent at times before the break and Borini was the player unleashing again after Lallana and Alberto Moreno had moved Liverpool forward. However, his curler from the left corner of the Hammers box was too high.

A mistake in possession by Skrtel went unpunished by the hosts' Sakho, sending over the crossbar, while at the other end Adrian's reflexes were called upon when Balotelli shuffled inside his marker and delivered a strong finish toward goal.

Rickie Lambert was introduced for Borini with the pressure mounting from Rodgers' charges and a backward header by Reid landed in the grateful hands of Adrian as Lallana whipped a corner in, although an equaliser was frustratingly elusive.

Instead, it was West Ham who found the net before the full-time whistle. Downing adopted arch creator mode to thread through to substitute Amalfitano, who calmly sent a finish around Mignolet to leave Liverpool tasting a third Premier League loss of the campaign.