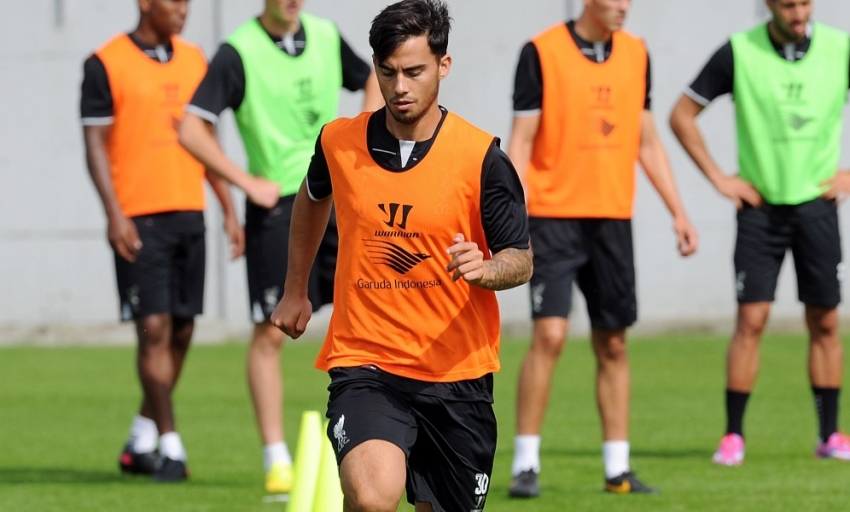 Dowie at the double in thriller

Fresh from an invaluable season of experience in his home country, Liverpool midfielder Suso has returned to pre-season training this week with a singular vision: to stay and fight for a place.

After a breakthrough campaign in 2012-13 courtesy of Brendan Rodgers' faith in young players, the talented playmaker actively sought a loan switch last summer to further his development.

Almeria and La Liga were the destination of choice and a helpful one too; Suso clocked up 35 appearances in all competitions, contributing three goals to the cause to avoid relegation.

Now back at Melwood, the 20-year-old believes his season away from Anfield improved his performance level and he's determined to prove that claim to Rodgers and the fans.

"After the season in Spain, I think I have become a better player - I learned a lot," Suso told Liverpoolfc.com as the first week of sessions concluded in West Derby.

"Obviously Liverpool are going to sign a lot of players because we are in the Champions League this season, and we have to have a good squad because there are a lot of competitions.

"But if I fight for my place, I do my best every day in training and when I have the chance to come on or start a game, if I do well, I could have chances to play a lot of minutes in the first team.

"I came here in December at Christmas when I had my week of holidays. In Spain, we have a one-week break at Christmas and I came here for two or three days to have a meeting with the manager.

"He talked to me, said he was happy with what I was doing and said that this season he wants me to stay here. I want to stay here and sign a new deal.

"For me, there is no bigger club than Liverpool. The crowd, the people, the stadium and the Kop - that's a feeling that you cannot explain. You have to live that just to know what you feel.

"It's a really good experience. Last season I was at many stadiums and I never saw a stadium like Anfield. My option is to stay here, sign a new contract and fight for my place."

Based in another country he may have been, but Suso was following the Reds' exploits closely last season, as a long-awaited championship narrowly eluded Rodgers' free-flowing team.

He said: "I was following every Liverpool game, watching every game, and I was really happy when I saw that Liverpool were winning, top of the league and could win the Premier League.

"It's a big difference - Liverpool fighting to win the league and we were fighting to not get relegated. But that's the difference between a small club and a big club like Liverpool.

"In this case, you appreciate the big things that a club like Liverpool do. Living in another city was a big difference but it was good for me to see the difference and appreciate this club as well."

In conversation with Suso, it becomes noticeable how many times the No.30 uses the word 'learn', repeatedly stressing the necessity to evolve and improve under any circumstances.

Analysing the 12 months he spent representing the shirt of Almeria, the Cadiz native considers the education - though different to life on Merseyside - to have been hugely beneficial.

"When I was here in Liverpool the season before last, I played a lot of minutes here and I was really happy, because to be 18 or 19 years old and playing in the first team of Liverpool is a big thing," the Spain youth international added.

"But I wanted to play every week, full games, and I did that last season. I started every game except for five or six games, and I was really happy because the team did not get relegated to the Second Division. That was important.

"I learned a lot in every game and every week in training, with some other players - maybe not the same quality as here, but they were good.

"I enjoyed it so much because I wanted to get minutes, and to go on loan for one year just to play football. I knew that if I stayed here, I'd maybe play a lot less than I did last season.

"That's why I went on loan - to learn. Every time I come here for training, I try to learn from the players. Last season in Spain, all I wanted to do was get minutes. I played with other players, older players, on the pitch. What I tried to do was to learn."