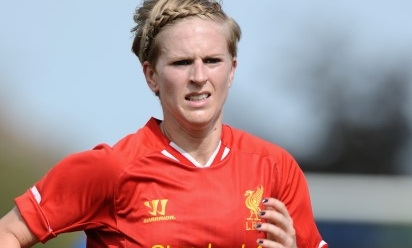 Natasha Dowie, Katie Zelem and Gemma Davison all scored twice as Liverpool Ladies returned to their best form with a magnificent 7-1 win at Durham in the Continental Cup on Sunday afternoon.

After last weekend's rather unfortunate 1-0 defeat to Arsenal, the cup provided a welcome distraction for Matt Beard's side.

Dowie could easily have had a hat-trick as she also hit the post with a penalty, while skipper Gemma Bonner was also on target for the Reds.

Beard was boosted pre-game with the news that American goalkeeper Libby Stout shrugged off a knock to start while Danish star Nina Pedersen made her full debut.

The ladies, wearing the new yellow away kit, were quickly into their stride. Dowie missed a glorious chance when clean through on goal in the early stages when she was denied by the Durham goalkeper, but minutes later the No.9 pounced to fire the opener.

Martha Harris and Amanda Da Costa both went close to doubling the advantage before Dowie smashed a fantastic effort onto the bar from 20 yards out.

Just before the break the Reds were awarded a spot kick when Fara Williams was brought down, but Dowie hit the post after sending the keeper the wrong way.

Bonner did make it 2-0 just after the restart when she headed home following a corner, then a superb passing move involving Zelem and Corina Schroder saw Dowie make it 3-0.

Davison then produced a dazzling run which ended with a shot just wide and Dowie fired another effort inches over the bar as she searched for her hat-trick.

Zelem then made it 4-0 when she latched onto a perfect assist from Lucy Bronze, and minutes later she was on the mark again to make it 5-0.

There was still time for Davison to make it six after Durham failed to clear, and seconds later the No.10 scored again after another assist from Bronze.

Dixon netted a late consolation penalty for the home side, but after four games without a win Beard will be absolutely delighted with this display as Liverpool returned to their very best form in style.

Click here for the special offer for next weekend's match with Doncaster Belles.