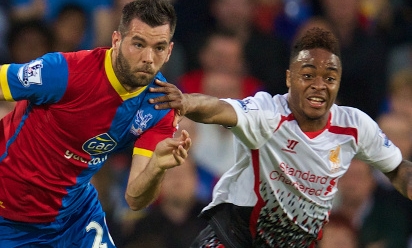 Liverpool suffered a comeback of epic proportions, surrendering a three-goal advantage, in drawing 3-3 with Crystal Palace in the Barclays Premier League on Monday night.

On his 50th league appearance for the club he joined in the summer of 2012, Joe Allen notched his first goal in the competition for the Reds with a calm, headed conversion when he was found in space inside the area from a Liverpool corner.

Three more points seemed to be secured in two clinical second-half minutes; Daniel Sturridge clipped home from distance to double the lead and the advantage was further boosted when Luis Suarez punted in at the near post within moments.

But Palace remarkably struck back three times to claim an unlikely draw, firstly through Damien Delaney and then a double by substitute Dwight Gayle as the Reds were denied a crucial win in incredible circumstances.

When teamsheets were submitted an hour before kick-off, the XI selected by Brendan Rodgers showed one change from the side that suffered a 2-0 defeat by Chelsea eight days ago - Sturridge replaced Philippe Coutinho, who was not risked with a slight injury.

With a vociferous home crowd bellowing behind them, the hosts started brightly and wide-man Jason Puncheon caused a series of problems, although when an inviting chance presented itself in the sixth minute, the Palace man could only slice off target.

Moments later at the other end, centre-back Mamadou Sakho nodded wide with a header after being found completely unmarked by a precise, curling corner into the danger area by the skipper, Steven Gerrard.

Then, on the quarter-hour, Allen capitalised on time and space yards into opposition territory to deliver a lofted through ball which married perfectly with a rush into the penalty box from the right side by Glen Johnson - but the full-back glanced over.

Dribbling in from the same flank with 18 minutes played, Sturridge clipped a strike which took a skimming deflection and drifted out for a corner. That set-piece was whipped to the back post by Gerrard, where Allen was waiting to expertly head low into the back of the net for the opener.

On 30 minutes, there was an element of surprise around the stadium as Suarez lined up an audacious free-kick from 30 yards at a minimum, but the Uruguayan's powerful hit travelled worryingly close for Palace goalkeeper Julian Speroni.

His fellow custodian, Simon Mignolet, reacted with the necessary speed and reflexes to palm out a rasping drive by Puncheon as the home side searched for a response, and the Belgian produced something even better to tip over a Mile Jedinak hammer from distance.

Premier League top scorer Suarez threatened a second for the Reds with three minutes remaining in the half. Gerrard released Allen with an outstanding pass into the left channel, allowing the Welshman to tap into the No.7's path - but his effort towards the near post was blocked by Speroni.

Liverpool kicked off the second half brightly and it was only the outstretched fingertips of the Eagles' 'keeper that thwarted Sturridge as he curled superbly in the direction of the far corner. From the rebound, his strike partner blasted over.

What followed in a 120-second flurry ensured that did not matter, though. Firstly, Gerrard picked out Sturridge with a sublime, accurate pass and the No.15 wasted no time in turning, running at goal and finding the bottom corner to the right with the slightest help of a deflection.

Then Raheem Sterling and Suarez combined with a move centred on close control, subtle touch and composure in a congested zone, culminating in the latter dispatching a perfect finish into the near post to extend the lead to three.

As the visitors had earlier in the half, however, Palace hauled themselves back into contention with a brace of strikes in as many minutes, beginning with a deflected blast by Delaney that left Mignolet helpless.

Yannick Bolasie then set off on a penetrating dribble along the left wing before accurately crossing into the middle for substitute Gayle, who was composed enough to side-foot low into the net and usher in a grandstand finish.

And a scarcely believable comeback was completed for the Eagles when Gayle took control of a chested flick-on, burst through centrally and slotted underneath Mignolet to snatch a point and deny the Reds in dramatic fashion.