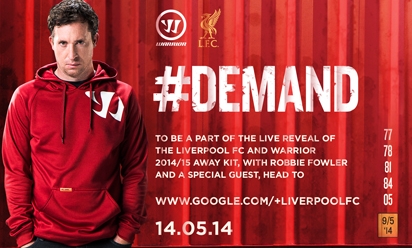 Liverpool FC and Warrior will make history on Wednesday, May 14 by revealing their brand new 2014-15 away kit via a Google+ Hangout – and we're looking for five supporters to take part in the unique unveiling. 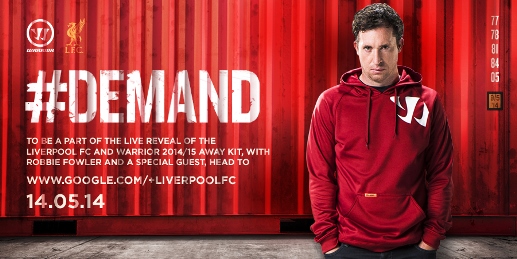 No club has ever previously used the live webchat platform to provide fans with the first view of a new strip, meaning the Reds will break ground on the day that they face Shamrock Rovers in a post-season friendly in Dublin.

From 3.30pm BST, two hours before the match kicks off at the Aviva Stadium, former Liverpool goal-getter Robbie Fowler will be joined by another special guest legend and a quintet of fans for a 30-minute conversation which will be streamed around the world as it happens.

The entire event will be broadcast live through the club's official Google+ page, the Reds' YouTube channel and on Liverpoolfc.com, and questions can be submitted for the ex-striker by using the Warrior hashtag #DEMAND.

In addition to fielding questions on his unforgettable Anfield career, the man nicknamed 'God' by Kopites will exclusively show the team's away jersey, shorts and socks for next season - designed by official kit supplier, Warrior - for the very first time.

Following the launch of the side's impressive all-Red Warrior home kit for the 2014-15 campaign in April, this occasion is one that no Liverpool supporter will want to miss, with the strip set to join an historic collection from the past.

And five fans can make themselves a central figure in the reveal by participating in the Hangout; if you are interested in taking part and know you will be available on May 14, click here to complete a short application form before 12pm BST on Wednesday, May 7.

The brand new away kit will be available to pre-order immediately following the unveiling in Dublin, by clicking here to browse the Official LFC Online Store or visiting any club retail outlet.

Tickets for the Reds' post-season friendly encounter against Shamrock, to be played at the Aviva Stadium on May 14, remain on sale and can be purchased by clicking here.