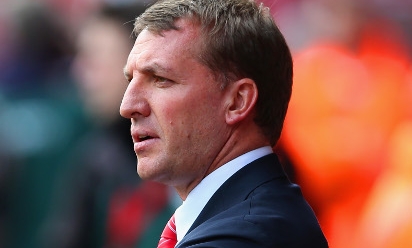 Brendan Rodgers told Liverpool's players of his immense pride in their efforts after the Reds saw an 11-game winning streak halted by Chelsea on Sunday.

The manager held his head high as he faced the press following a sobering 2-0 defeat against the Blues, insisting his side gave everything on a highly charged afternoon at Anfield.

Liverpool controlled the ball throughout the tie, attempting to pierce through two impenetrable banks of blue shirts, but it was all to no avail.

The home crowd was stunned when, on the brink of half-time, Demba Ba scooped the ball and raced clear to fire home in front of the Kop.

Rodgers sent his players out after the interval with the same message - to dominate the play and delve for openings; however, Chelsea held firm before snatching a second through Willian near the finish.

"My players were outstanding today apart from just that final bit around the box," Rodgers told reporters after the final whistle.

"Congratulations to Chelsea, they won the game. They probably came for a draw and we just couldn't quite make the breakthrough.

"But we showed everything today. We tried to get on the ball and we were the team that wanted to win the game.

"It was difficult - they virtually played, right from the off, with a back-six. They had a back-four with the two wingers back in and the midfield three in front.

"So there were 10 players, from the first minute, behind the ball and we just found it difficult to break down, but it wasn't nerves, it was just that final ball and maybe a bit of luck to break through.

"We're obviously disappointed with the result, but I only have pride for the players after the game because we sit two points above Chelsea, and you see the squad that they have.

"I can tell the players, like I did say afterwards, that I'm so proud of them and the position we find ourselves in, with the money that has been spent at the top end of the table, for us to still be two points clear of Chelsea."

The defeat brought a mazy, scintillating run of 11 consecutive league victories to a close on a day when the Kop was once again in full voice, generating a ferocious atmosphere prior to kick-off.

Much has been made of the supporters' passion in recent weeks as Liverpool have swept aside all comers, both at Anfield and on the road - and so Rodgers was keen to highlight their backing, which was unyielding even in defeat.

"I want to say a big thank-you to the supporters today because they were brilliant," said the manager. "They kept pushing us, but unfortunately we couldn't do it for them.

"We were the better team with the ball. I thought we were the team that wanted to win the game. But it's hard to reinforce that when you lose the game. My players tried to unlock them right from the very off. Chelsea are an experienced group of players.

"But we have a way of working and I take great pride in that. We might not have got the result today, but we've seen over the course of the season that we have made great strides and we'll continue to do that.

"If we can finish off the season and win these two games, we'll finish above them and maybe above Manchester City. But there's still a way to go.

"City will now feel they can go on and win their games. We'll just recover now; we'll focus on the next game, and continue with that positive mentality that we've had throughout the season - because that's the reason why we are where we are."