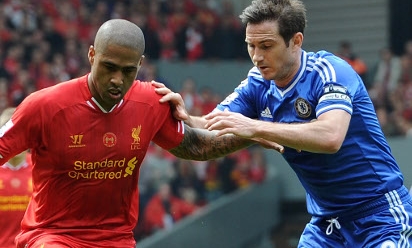 Liverpool's relentless winning streak in the Barclays Premier League was brought to a halt on Sunday as Chelsea ground out a fortunate 2-0 victory over the leaders at Anfield.

The result ended the Reds' unbeaten record in 2014 and tightened the race at the summit of the division, with two fixtures remaining to navigate in the campaign.

After an extremely congested first half which the Reds had dominated, it was Demba Ba who capitalised on dreadful luck for Liverpool to drive clear and plant a cool finish home and hand the visitors a lead to protect in the second period.

That they did, stopping ceaseless attempts by the hosts to salvage an equaliser, and eventually the Blues grabbed a game-finishing second as Fernando Torres raced clear and squared for Willian to finish.

A stop-start opening once the game kicked off prevented the home side from producing a typically speedy surge and the first real threat at goal occurred when Ashley Cole strode forward and clipped a low drive towards the Kop end which Simon Mignolet palmed away at his left on six minutes.

Glen Johnson's pinged strike, set up by a dinked short corner from Steven Gerrard, was deflected behind, and Philippe Coutinho sliced wide at the back post having been found by a delicate Luis Suarez cross from the opposite flank.

Chelsea full-back Cole was well-placed to clear off the line when an outswinging corner was bundled dangerously in the direction of Mark Schwarzer's net, and when Suarez volleyed the subsequent loose ball across the area, Mamadou Sakho awkwardly redirected over.

With 30 minutes played, Rodgers' charges could boast more than 73 per cent possession and had attempted seven shots, but the Londoners were dropping deep and defending in great numbers to stifle the hosts in every attack.

Another precise Suarez centre from the right wing was delivered into a dangerous corridor, as the Uruguayan aimed for Coutinho, but Schwarzer smothered at the second time of asking as Raheem Sterling rushed in for a rebound too.

When Cole squandered control with five minutes remaining in the half, the Reds' engine kicked into gear - Coutinho found Sterling, who fed Suarez, but the Premier League top scorer's curler from 20 yards drifted too high to present any serious trouble.

As the opening period entered added time, centre-back Tomas Kalas glanced an inviting opportunity wide as a Frank Lampard corner from the right connected; but moments later, Chelsea were in front in any case.

The captain, Gerrard, cruelly slipped as he tried to trap the ball inside the Liverpool half and Ba pounced, powering forward through the middle and retaining his composure to calmly side-foot around Mignolet to send his team into the break 1-0 up.

Sterling's speed was proving a focal point when the Reds began their second-half mission, although referee Martin Atkinson rejected loud appeals for a penalty when the No.31 collected a Suarez pass and fell as he rolled around Kalas.

Schwarzer was alert but comfortable in taking a deflected Gerrard blast, before the Australian sprawled instantly to his left to claw fingertips onto a handsome volley from distance by Joe Allen as the Kop rose in unison, seemingly ready to celebrate.

At the other end, Mignolet was forced into a remarkably similar and outstanding save - for his part, to deny a drilled effort by Andre Schurrle. Allen then dispatched a low hit to the other side of Schwarzer's goal and the 'keeper was equal to it again, as he was to a central shot by Gerrard.

With Chelsea simply camped in their own territory, soaking up unyielding pressure by the home team, Liverpool mounted move after move after move; they were largely limited to ambitious, long-range strikes, however, and another Gerrard piledriver was saved.

Determined to haul his outfit level, the skipper positioned himself perfectly as Suarez looked up from the left flank and lofted into the area, but the No.8's powerful header was kept out by the indomitable Schwarzer.

And there was simply no way through the organised backline of Jose Mourinho's team - in particular, Schwarzer - who defended their slender advantage despite the endless efforts of the Reds, and even claimed a stoppage-time second through substitute Willian.