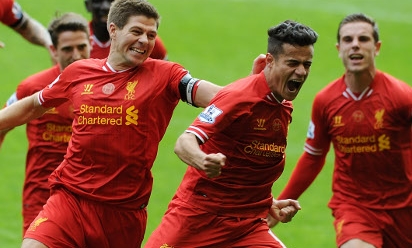 Raheem Sterling had kick-started another relentless 90 minutes in L4 when he converted from close range after collecting a Luis Suarez through ball, before Martin Skrtel glanced a header into the net at the Kop end for double Reds delight.

David Silva required 12 minutes of the second half to haul City back into the affair, converting from close range, and the Spaniard was at the centre of an equaliser, forcing home at the near post via a Glen Johnson deflection.

But, against a mounting comeback by the Manchester club, Coutinho found a pivotal winner, lashing home with barely 10 minutes remaining of the encounter to settle a tie to remember and unleash emotional scenes for Kopites.

Brendan Rodgers had maintained faith in exactly the same starting XI that successfully downed West Ham United last weekend, although vice-captain Daniel Agger returned to the group and took his place among the substitutes.

Before the match kicked off, the entire stadium observed an impeccable minute's silence in memory of the 96 supporters who lost their lives at Hillsborough, while the Kop formed a special mosaic reading '96 - 25 years' in tribute.

When the action got underway, the home side used the remarkable atmosphere inside the ground to catapult themselves into an early lead; Suarez's strength retained possession, his vision dissected the City defence and Sterling showed composure beyond his years to take a touch and curl around Joe Hart.

On the quarter-hour, the goalscorer adopted creator mode, scampering rapidly along the right flank and thrashing a dipping cross into the penalty area which Daniel Sturridge flicked towards the corner, but could only divert wide of the left post.

Having spent much of the opening 20 minutes limping, powerful midfielder Yaya Toure succumbed to an injury and was replaced by Javi Garcia - who instantly collected a booking - as the visitors struggled to contain the sheer force of the Reds.

The Kop rose to their feet en masse on 26 minutes as a Coutinho corner from the right arrived on a platter for Steven Gerrard but the captain's strong header was central enough for Hart to punch away.

Such respite was short-lived for City, however; from the subsequent corner, Gerrard whipped the set-piece to the near post, where Skrtel was waiting to hammer a looping header beyond the reach of Hart for 2-0 and delirium around the stands.

With moments remaining in the half, Coutinho worked himself into a prime shooting position after typically relentless pressing by the Brazilian and Jordan Henderson had retrieved the ball, but the No.10 pulled his low effort off target.

Silva had a diving header deflected wide on 44 minutes and mayhem ensued from the centre into the Liverpool box, but first Sterling and then Johnson stood firm to clear off the line. Simon Mignolet then sprawled brilliantly low to his right to beat away a fierce half-volley by Fernandinho to preserve a two-goal half-time lead.

Rodgers' side started the second half brightly too, and Sterling was afforded room to unleash a drive from the edge of City territory but sliced his attempt high and wide. Manuel Pellegrini introduced James Milner for Jesus Navas.

The away side thought they had reduced their arrears when the England international squared for Silva to tap home, but the ball had run out of play; on 57 minutes, though, precisely the same move proved successful and City clawed themselves back into the tie.

And, five minutes later, the score was level. Intricate passing on the left flank freed Silva - a menacing presence throughout the second half - and when the Spaniard dispatched a low strike at the near post, it bobbled off Johnson and into the net.

With City energised, Mignolet was importantly alert to deny Edin Dzeko, who blasted at goal following a defensive mix-up, and the travellers cranked up the pressure by adding the returning Sergio Aguero to their assault.

Anfield drew a collective breath in fear when the Argentinian substitute spun Skrtel on the left and raced forward in a two-on-one situation against Mamadou Sakho - fortunately, the eventual delivery eluded Silva at the back post.

But back came Liverpool and the magical moment unfolded on 78 minutes. Vincent Kompany hacked at a throw-in from the right flank and the loose ball fell to Coutinho, who planted a crucial finish low into the corner and prompted joyous scenes across the stadium.