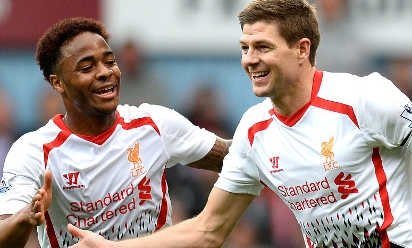 Fresh from the adrenaline rush of securing a ninth consecutive victory for Liverpool, Reds captain Steven Gerrard pointed to the character shown by the team as evidence of their desire for success.

Brendan Rodgers' charges reclaimed top spot in the Barclays Premier League with a 2-1 win over West Ham United at Upton Park on Sunday, with the skipper on target with two vital penalties.

As always, the 33-year-old was the heartbeat of his side's performance, probing in an attacking sense, protecting in the defensive third and providing the requisite composure from 12 yards.

Three more points in East London sent Liverpool back above Chelsea at the summit of the Premier League - and Gerrard believes the result is perfect proof of the Reds' determination to remain there.

"There are some very hard games to go - we've got a huge game next week," the skipper told Sky Sports after the final whistle. "The message is to stay calm.

"We'll give everything we can now and every time we go on the pitch, we've got to leave every single ounce of energy and determination out there. That's what we're planning to do."

Gerrard edged the Reds ahead against West Ham when Luis Suarez secured a penalty moments before the break, but Guy Demel bundled in a disputed equaliser before the half-time whistle.

The No.8 reflected: "We took the lead and the idea from then was to build on that and not concede a goal. That was a huge setback for us, with the timing of it to go in level.

"We wanted to go in with our noses in front. But the character and determination of the team - we want this really badly - showed in the second half.

"The manager said to us at half-time, and the players were saying: 'We can't change anything - it happens.' They all even themselves out throughout the season.

"That one went against us, but we couldn't feel sorry for ourselves. We had to roll our sleeves up and give an extra 10 per cent - that's what we did."

The triumph over the Hammers followed eight successive wins since the 5-1 rout of Arsenal on February 8 - the best run of any team in the Premier League since the 2008-09 season.

Gerrard felt that his colleagues navigated another different examination to those they have previously faced during the past two months, and reserved praise for one man in particular.

"Different sides keep asking us different questions," continued the midfielder. "West Ham were very direct today, have got an in-form striker in Andy Carroll and great delivery from out wide.

"[Matt] Jarvis came on and added to what Stewart Downing was already doing. It was a tough game and a tough 90 minutes, but we showed great resolve, character and the togetherness in the squad.

"I think what summed it up was Lucas Leiva - he hasn't been in the picture for a while, been injured, but does a fantastic job to swing the game and sees it out."

Next up for Gerrard and co will be a heavyweight Anfield clash with close rivals Manchester City, next Sunday; but the captain rejected the suggestion that the match could prove decisive.

"All it would give us is three more points," he said. "But there would be four huge games to go after that."