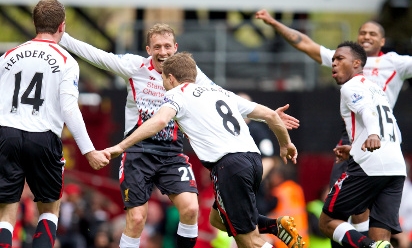 Liverpool claimed their ninth consecutive Barclays Premier League victory and moved back into top spot with a hard-fought 2-1 win against West Ham United at Upton Park on Sunday.

Steven Gerrard handed Liverpool an advantage seconds before the first half concluded, converting with a spot-kick - conceded with a handball by James Tomkins - to move onto 172 goals for the club, level with Kenny Dalglish.

But, instantaneously, the hosts levelled as Guy Demel bundled home from close range despite claims from Brendan Rodgers' charges that goalkeeper Simon Mignolet had been fouled by Andy Carroll during the build-up.

Determined not to release their dominance of the fixture, the away side were in control after half-time and grabbed their rewards by securing another penalty, which Gerrard dispatched with typical aplomb to ensure three more points for his team.

The pre-match confirmation of teams brought news of a single change to Rodgers' line-up - French defender Mamadou Sakho made his first start for the Reds since December, replacing vice-captain Daniel Agger.

Only three minutes had elapsed before Luis Suarez sought to increase his season tally to 30 with an ambitious free-kick curler from distance, but the Uruguayan's dipping strike did not fall quickly enough to register on target.

With Philippe Coutinho and Jordan Henderson at either side in midfield, skipper Gerrard dictated the tempo of proceedings throughout the opening quarter-hour, but it was the No.7 who was inches away from breaking the deadlock midway through the half.

Collecting possession in a crowded area on the left edge of the Hammers' penalty area, Suarez worked freedom for himself and, as per usual, attempted something unexpected - the forward's lofted shot unfortunately bounced away off the upright, however.

It was a West Ham defender, namely Tomkins, who denied Suarez in Liverpool's next foray forward; Coutinho found his colleague in space on the left and the Premier League top scorer shaped to produce a repeat of his January strike at Stoke City, but the centre-back was in the way.

With 30 minutes played, a delightful piece of link-up play between Henderson and Daniel Sturridge allowed the latter to toe-poke a hit from an awkward height towards Adrian, but it sailed too high to trouble the home 'keeper.

In response, Mark Noble whipped a set-piece wide to the left from a dangerous central position, before Jon Flanagan successfully marshalled former Liverpool striker Carroll as the imposing Englishman looked to reach a cross by fellow ex-Red Stewart Downing.

A helpful deflection into the path of Sturridge, in range around 20 yards out, presented the No.15 with another opportunity to unleash a left-footed piledriver, but again the striker watched his effort travel off target.

From there, the action erupted; Gerrard drove a sublime pass into the path of Suarez, who tried to move past Tomkins in the box and was stopped by handball. With trademark composure, the skipper passed the penalty beyond Adrian one minute before the break.

The Reds did not enter half-time in front, though. Under heavy pressure from Carroll, Mignolet spilled a delivery into Liverpool territory and Demel capitalised to find the back of the net, prompting lengthy - but ultimately futile - protests by the visitors.

Rodgers' immediate reaction was to introduce Lucas Leiva for compatriot Coutinho, and the midfielder narrowly failed to find Suarez as the forward scampered into the area from a one-two eight minutes after the restart.

The same man fired a low, deflected punt straight into Adrian's hands after rapid movement by Raheem Sterling, while strike partner Sturridge directed a similar daisy-cutter at the near post which the 'keeper was comfortable in saving.

Although the Reds were camped in the opposition half, Carroll served a warning of his and West Ham's threat when he connected with a cross from the right by Mohamed Diame and powered a header against the woodwork.

But the travellers regained a crucial lead shortly before the 70-minute mark; substitute Lucas threaded a pass into the run of Flanagan, who went down under a challenge by Adrian. There was never any doubt as Gerrard planted home his 10th penalty of the campaign.

From the opposite angle to his first-half effort, Suarez once again struck the crossbar - this time with an outside-of-the-boot curler - and the Uruguayan saw a toe-poker stopped by Adrian, but the Reds did not need another conversion and Rodgers' outfit defended their lead well until full-time.